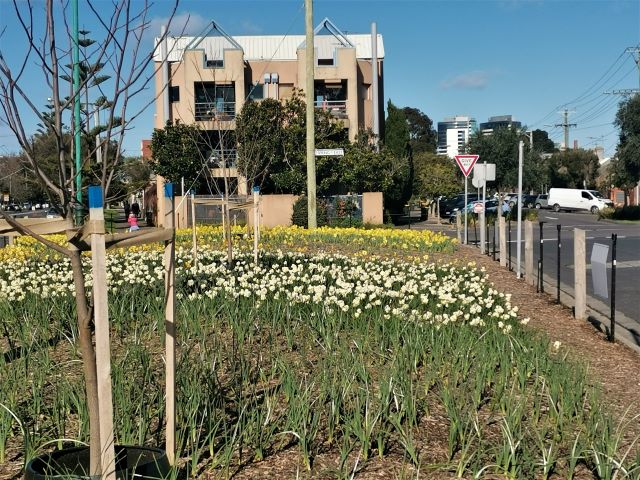 A crowd of daffodils

Grey days and lock down blues are relieved by a mass of trumpeting daffodils blooming in a triangular reserve off Pickles St in Port Melbourne. The fragrance is so strong, it makes its way through a mask. The splendid flowering follows the successful remediation of the site using sunflowers. It has become a neighbourhood attraction during lockdown.

During the lockdown it has become more common to hear people in Port Melbourne say out loud (and on facebook), ‘I am so grateful to live here’, ‘I love living here’ and how much they appreciate the sense of community.

The bayside location in and of itself does not a community make. Much of what Port Melbourne people value, including the sense of community, have not come about by chance, but by careful cultivation. There was great apprehension of the wave of development and change in the ’90s when people feared that Port’s strong sense of community would be lost. Now current Port residents are as likely as older Port people to say that they can’t walk down Bay St without catching up with someone they know.

Walking has been the means of getting to know the 5km radius world. Even though by now many are beginning to chafe within these pleasant bounds, so much is available within that radius – local shopping, high quality community run childcare and aged care, the farmers market and the inter-connected, well maintained parks and open spaces that are now recognised to be fundamental to wellbeing.

The sense of community has also been enabled by Port’s urban structure and the 19th century sub-division pattern but it would be hard to find an attribute of life or landscape in Port Melbourne that has not been touched by the hand of local government in some way – some more visible than others.

On Wednesday 19th August, after some speculation, the Victorian government confirmed that local government elections will proceed as planned on 24th October. They will be conducted by postal ballot for the first time since Port Phillip was created in 1994.

All candidates are now required to undertake online training for the first time – a move welcomed by some, and resented by others, since mandatory training is not required of any other level of government in spite of some reprehensible behaviours.

Although some continue to assert that Council’s core obligation is to pick up rubbish, the recently updated Local Government Act (March 2020) enlarges the scope of Council obligations to include planning for, and mitigating, climate risk.

Electing councillors is not just a passive matter of waiting for the envelope to arrive from the Victorian Electoral Commission. Check out the candidates as they make themselves known and contact them to find out where they stand on the issues that matter to you, whatever they are.

It has become a cliche of the pandemic that ‘we are all in this together’ but as Margaret Simons has put it so beautifully in a recent Age article ‘COVID-19 is like black ink in white china. It shows up all the cracks in society.’1 That is why I’ll be looking out for candidates with a clear commitment to all in our community.

Key Dates and where to go for further information

The Victorian Electoral Commission website is the key place to go for information about forthcoming Council elections.

Election Date is 24 October but postal voting will begin on 6 October.