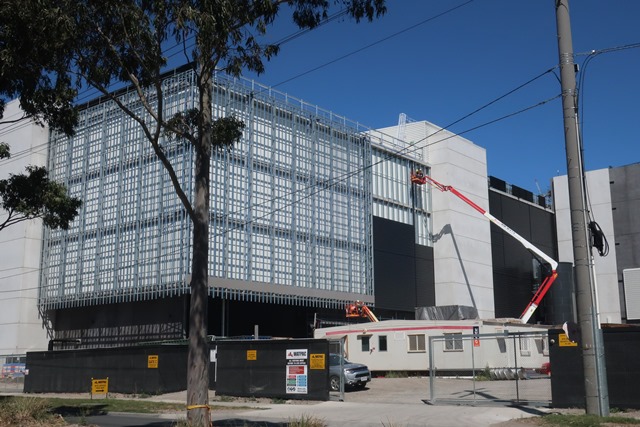 A site in transition in Fishermans Bend

These closed gates stood for many years on the edge of a weedy paddock on Lorimer St in Fishermans Bend, a remnant of General Motors Holden once extensive operation. In the background are some of the GMH workshops.

Since 2013, the land has been sold. Subdivided. Planned for. Built. The gates that were a link to the former use of the site have gone now. Could they possibly have been the very same gates out of which poured these smiling workers promoting the multinational composition of the GMH workforce in 1955?

The land known as 578b Lorimer St now houses data centres owned by Equinix, an American multinational company. ME1 was built to the rear of the site in 2015. ME2 is nearing completion towards the front of the site on Lorimer St. MEI and ME2 are part of a network of other Equinix data centres in Melbourne, Sydney and on five continents around the world that provide secure data and connection services.

The planning application for ME2 was referred by the Minister for Planning to the City of Melbourne in 2017 for their comments. The urban designers had reservations. The structure that best suits data storage is a plain concrete box – not a preferred urban design outcome. They regretted the lack of activation to the street as well as the failure to take up the opportunities of the extensive roof space for solar capture. They rued the overbearing presentation to Lorimer St and the blank side walls. In response some articulation to the side walls of the building was required. It was also not in keeping with the aspirations for a high quality public realm in Fishermans Bend. They reluctantly concluded that it should be approved, even though they were not enthusiastic. They noted that few pedestrians pass this way.

The purpose of a data centre is not to be friendly or accessible or to have a cafe onto the street. Its purpose is to house data securely. The specifications for ME2 emphasise security – physical, human and electronic.

The urban designers reservations are revealed.

Next door, a conventional business/industrial park has recently been finished. It’s a shame to see so much impervious concrete paving so close to the Yarra River with no planting or any arrangement (visible from the street) for stormwater capture and re-use.

On the River side of Lorimer St, the Webb Dock rail reserve provides convenient car parking for tradies working on ME2.

Within three years of securing the Port lease, the Port operator is required to prepare a rail access strategy for the Minister for Ports. The Port lease deal was concluded on 31 October 2016.