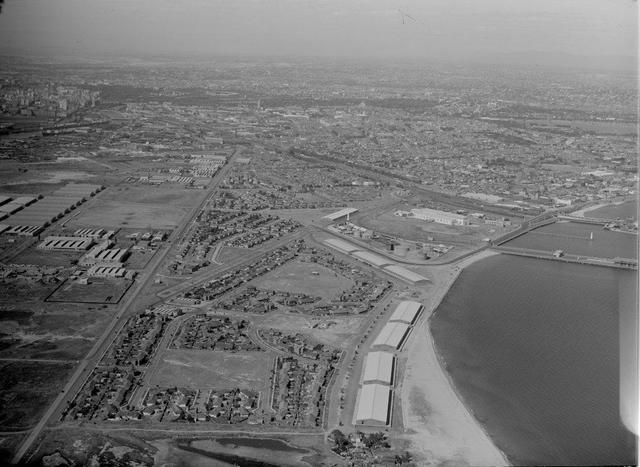 This week the Fishermans Bend Ministerial Advisory Committee released its first report. The findings and recommendations were widely reported, including coverage in The Age (20/10) Report slams Matthew Guy on rezoning of Fishermans Bend.

One of the many recommendations is that ‘Further consideration needs to be given to options for ensuring that Fishermans Bend will include housing diversity and perpetually affordable housing’. The report argues that it is

‘A fundamental principle of 21st century urban renewal is that housing diversity is essential to creating vibrant communities and that housing diversity will not be developed without intervention. This intervention can take the form of mandates (as in inclusionary zoning), incentives for affordable housing (as for example, in density bonuses) direct subsidy (as in purchase of housing stock or the subsidy of aged care) or ‘nudging’ (through the advance provision of social infrastructure).

It is notable that the Sydney development at Barangaroo includes provision for ‘key worker housing’ as do all large developments in London. To date, there has been no provision for affordable and diverse housing options included in Fishermans Bend planning.’

The recommendation reflects the absence of such planning for Fishermans Bend to date. Like much of the planning for the area, the vision that ‘Fishermans Bend is a place for all people and ages through the creation of diverse, liveable and family friendly communities’ has not been matched with mechanisms to implement it.

Fishermans Bend has been associated with innovative approaches to housing provision since the early 20th century. Overcrowding and poor housing conditions led the Port Melbourne Council to advocate for housing on the Bend.

J L Murphy, MLA for Port Melbourne, was an especially determined and persistent advocate for worker housing on the Bend.

The Port Melbourne Council itself explored the possibility of constructing housing in Fishermans Bend but it would have been too expensive for the workers for whom the housing was intended.

Fishermans Bend land was also reserved for Port purposes and the government was not willing to release it for housing.

Finally in 1926, the Lands Department sold 12 acres of reclaimed land at Fishermen’s Bend to the State Savings Bank of Victoria to build housing for first home owners of modest means. The houses cost £1,000 – £50 for the deposit and £750 for the land. The deposit was beyond reach of most workers in those times.

The first houses emerged from ‘the sandy waste’ west of Graham St (now Port Melbourne) Primary School and were officially opened on 2 February 1927. Further land was released and construction of what later became known as Garden City continued until 1948. 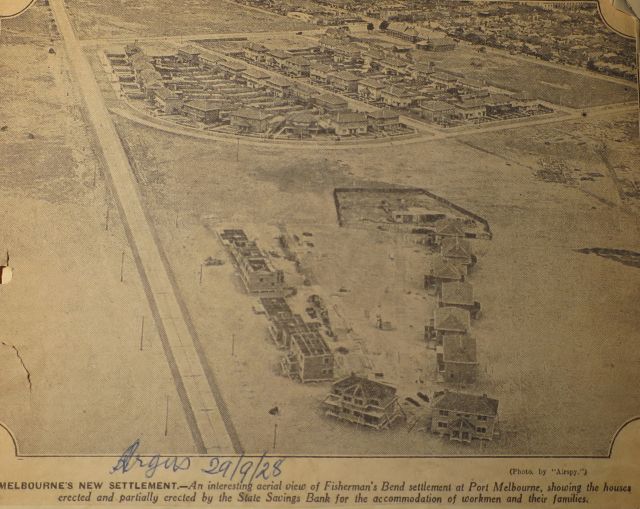 It was also in Fishermans Bend that the State government first ventured into building housing for rental recognising that home ownership was beyond the reach of people on lower incomes.

Following sustained pressure from housing reformers including Oswald Barnett to improve housing conditions, 44 houses were built around the corner of Williamstown Road and Graham Streets in 1936 during the tenure of Country Party Premier Albert Dunstan.

This small estate of an eclectic mix of housing styles was considered to be no more than a token gesture in relation to the scale of housing need.

Following the creation of the Housing Commission of Victoria in 1938, the first housing estate was designed and built in Fishermans Bend. The design and layout of the estate was put out to a competition. The conditions the houses sought to replace and the layout of the estate are shown here.* Prefabrication techniques were pioneered with the first concrete houses built in Howe Parade. Many people were rehoused from ‘slum’ housing in Montague and South Melbourne.

Most of this original public housing is now in private hands.

Port Melbourne is also home to the Wintringham Hostel at 74 Swallow Street. Wintringham creates housing to address the ‘scourge of elderly homelessness’.

Planning Minister Wynne, a former Minister for Housing, and Housing Minister Foley, have a strong history of innovation in affordable housing in Fishermans Bend to draw on in responding to this recommendation.

*Department of Human Services History of Public Housing especially slides 3&4. Think the caption may be incorrect

The City of Port Phillip heritage guidelines  cover the history of the very interesting Dunstan estate.