Back to a new school

Today these doors opened to welcome the first students to the new Docklands Primary School. The logo says it all – and more. The circle represents a porthole, and the piers represent the former Victoria Dock, as well as goal posts signaling the metaphoric goals that students are expected to kick here.

The campaign for a primary school in Docklands was long and sustained. Planning and development of Docklands has long been criticised for its failure to provide community infrastructure. Community pressure and mounting evidence proved compelling in the end. The Andrews Labor government made a commitment to the school in 2016.

Once the site and funding had been secured, consultation with surrounding community began. The same themes came up again and again. There was a craving for nature and sustainability, as well as a longing for a place to belong, to connect. It revealed how bereft the place was of those qualities. They were to become the foundation and context for the design response.

Cox Architecture has amply responded by creating a ‘learning landscape’. The 525 student school is organised around a central basket ball/netball court and includes outdoor spaces at every level. The window openings to Footscray Rd are minimal while the main presentation of the school is to Little Docklands Drive. The fence of the playground is thickly planted against Footscray Rd. 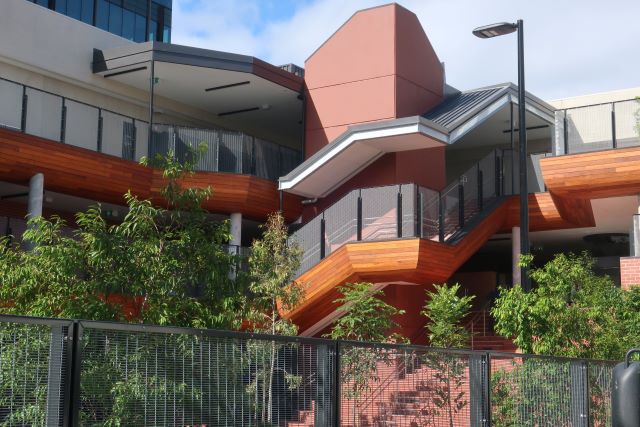 The three level school humanises this corner of Docklands. The timber balcony outdoor spaces look like the planking of the tall ships being restored at nearby North Wharf.  A car park and the Docklands Wheel currently identify the place. The school is close to the District Docklands and a major supermarket. 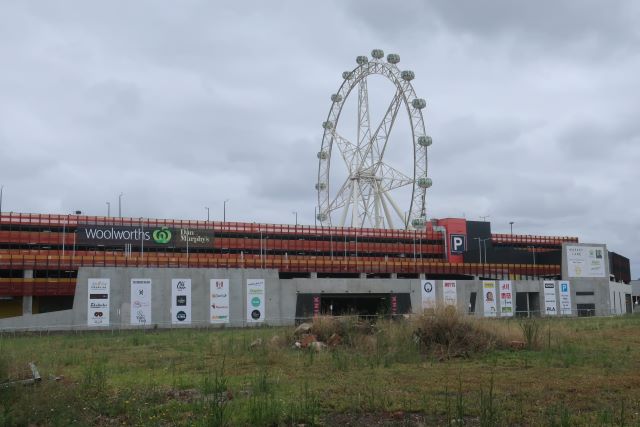 Although the traffic flows thick and fast, and will flow even more thickly when the Westgate Tunnel delivers more traffic onto Footscray Rd, New Quay and the rest of Docklands were designed to be walkable. Crossing Footscray Rd is another matter altogether.

The ways in which children will make their way to school was actively canvassed in the consultation and planned for – unlike in existing schools where drop off and pick up congestion is a major safety issue. The school also includes a 66 place kindergarten on the second floor which avoids a double drop off for families as well as making the transition to school easier. Kindergarten co-located with school is now part of every new school built in Victoria.

Adam Bright is the fortunate foundation principal of the Docklands Primary School. He was appointed in June last year to prepare for the first enrolments in 2021.

The opening of Docklands Primary School has flow on implications for the near new South Melbourne Primary School in Montague. Since that school opened in 2018, Docklands children and their parents made their way via an extremely hostile and circuitous route through the DFO South Wharf carpark under the Westgate Freeway. Now they can walk, scoot or ride along the water’s edge – much more pleasant.

The clock tower makes an educational claim on the corner. Interesting that the architects chose not to use a digital clock. The school is likely to exert a profound influence on that pocket of Docklands at New Quay and the shape of the few remaining development sites.

Perhaps in future the school clock will become the anchor of the place rather than the wheel.

Read more about Adam Bright, the new principal in this interview from Docklands News.