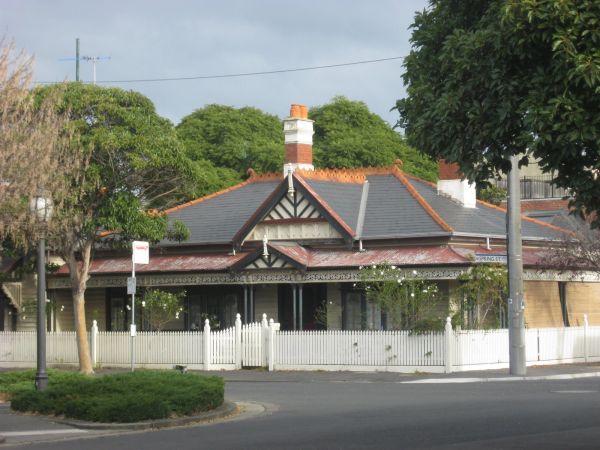 Clareville is thought to have been constructed in the 1860s or 1870s.

Purchased by James B Bartlett at the turn of the 20th Century, Clareville was the location for Bartlett’s SP boookmaking operation for around thirty years.

The Bartlett family were long time Port residents. James B Bartlett was the son of James John Barlett, former Mayor of Port Melbourne [1884-85], proprietor of the Railway Club Hotel in Raglan St, sporting identity and bookmaker.

Clareville is unusual as an apparently early house which was comprehensively altered at the turn of the century. The result of the alterations exemplifies the stylistic transition that can be seen in many houses constructed at the end of the nineteenth century in which the typical form of a Victorian double fronted house was overlaid with elements such as the half timbered gables, terra cotta roof ridging and lead lighted casement windows deriving from the Queen Anne and other Arts and Crafts domestic architectural styles.