In this season of callistemons and roses, the draft Fishermans Bend Framework was released.

It is just over a year since the Vision for Fishermans Bend and each of its precincts was adopted.

While it is understandably tempting to dive straight into your area of interest – whether it’s transport, heritage or sustainability – the framework is designed as an integrated approach to the planning for Fishermans Bend. Every objective is inter-related in the Framework.

The Framework was released even as two of the earliest projects to gain planning approval under former Minister Guy reached completion – the Gravity tower and 164 Ingles St. It is unlikely that either of these projects would be supported under the newly released framework which seeks to avoid both the over and under development of sites.

The map showing developments under construction and approved at the end of 2017 (p18) illustrates the concentration of development pressure in the Montague precinct to the north. 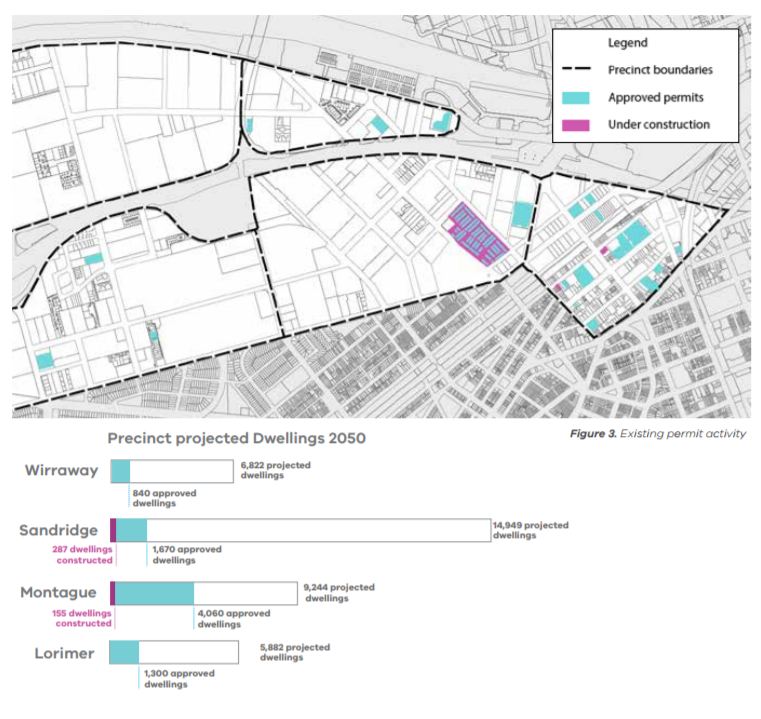 It is even more tempting to go straight to the pages that sum up the heights and setbacks across the renewal area but the planning approach is more nuanced and detailed than that. Rather than relying only on height controls, the amount that can be built on a site is guided by Floor Area Ratios. The approach has been adopted to encourage more diverse building types that respond to the constraints and opportunities of sites, rather than just the tower on podium which has been the pattern of development to date. More intense development is allowed around the proposed public transport infrastructure.

Here are three things I strongly support in the Framework which are consistent with all the views expressed to date on Port Places:

(1) The emphasis on walking and cycling.

Make Fishermans Bend a great place to walk for people with a wide range of abilities and needs (Objective 1.2, p30)

(3) The Framework has a much deeper respect for and understanding of Fishermans Bend’s history – natural and cultural – than the 2014 Framework plan. Heritage and character are recognised as integral to a sense of place and identity.

The Framework is supported by a range of background studies, all of which are available from the Fishermans Bend website.

Since this is such a hugely important project, I will return to highlight different parts of the Framework over coming weeks.

There are many opportunities to speak with members of the Fishermans Bend Taskforce about the issues that are closest to you and to form your view on the Framework.  Submissions are due on 15 December.

8am onwards at the South Melbourne market

Fishermans Bend – all the documents and updates