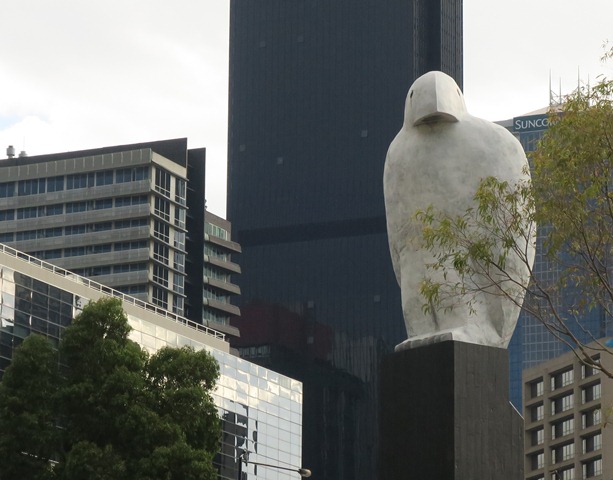 Bruce Armstrong’s Eagle is to be moved to make way for Lend Lease’s new development at Docklands – the last remaining uncontracted parcel of land in the Batmans Hill precinct.

In the restless landscape that is Docklands where place has been made and re-made, there is something about that eagle’s steady presence that is reassuring – it is at once full of gravitas and lightness. And the way he looks over everything.

‘Batmans Hill’ itself disappeared in the 19th century to make way for the railway.

I set out on this wintry afternoon to look at this sculpture intentionally rather than just in passing as I usually do – on the train or in a car. From the elevation of the Collins St extension, I looked directly into the eye of the eagle – or did he look at me? – and the sun came out briefly to illuminate the whiteness.

Then I sought to view the the sculpture at ground level which proved more difficult. That part of Docklands is very confusing for walking – the only people who seemed to be out and about in the cold ground level underworld were smokers.  Wurrundjeri Way itself makes no provision at all for pedestrians – which is perhaps just as well because it is such a high speed environment – but it was very hard to get close.

As I rode away, I could see that it might be good for this artwork to be moved to a more accessible place so long as it is still very public and the eagle has enough elevation to look over everything.

Bruce Armstrong’s work, in place since 2002, was commissioned as part of Docklands public art program, under which an amount equal to 1 per cent of the development cost of each precinct is spent on public art.

Will such a scheme be put in place for Fishermans Bend so that public art can create meaning and uplifting public experiences?