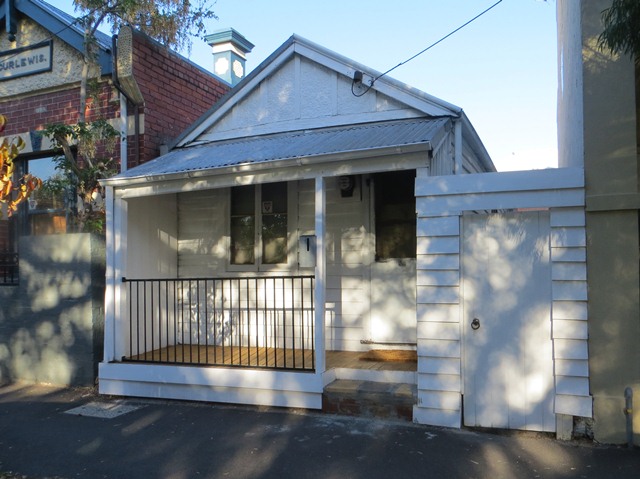 The house at 58 Station Street, Port Melbourne is for sale. Somehow this very small house has survived.

Thirty years ago Mrs Myrtle Tims, then 89, sat on her verandah in the late afternoon sun mourning the loss of the Port Melbourne train that was to be replaced by light rail.

“I miss that train dreadfully. I could tell the time by the train, it was like a clock to me” she said.1 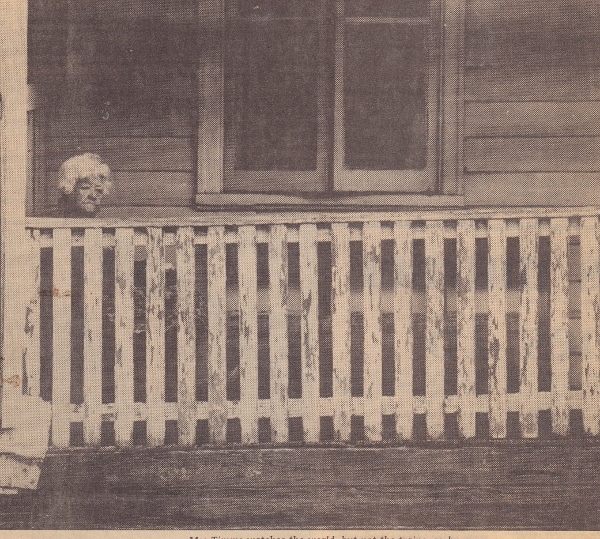 The closure of that rail line was the start of the changes that were to sweep over Port Melbourne.

Thirty years ago, in 1987, an EES2 was released for the  Sandridge City Development Corporation’s plan for the land in the hinterland of Port Melbourne’s piers which had been identified for redevelopment. The centrepiece of the scheme was a Queensland style canal estate. The grandiose and exclusive scheme, involving office towers to be accessed by a boulevard along Port Melbourne’s railway reserves, turned its back on the Port Melbourne community. It was a very late ’80s kind of proposal.

While the whole proposal was objectionable to the Port Melbourne community, the canals were the most problematic. People who lived and worked in the area were well aware of the extent of contamination of the site from several industries and the Commonwealth Oil Refinery. The EES process was to bring these issues to the fore.

Hearings for the EES began on 21 September 1987 with submissions due in on 26 October.  It was anticipated that the EES would be quick. Instead it went for some 57 sessions from September to February the following year.

Campaigners picketed the ANZ Bank in Port Melbourne, financial backers of the project, but in the end it was the lengthy remediation of the site and ‘the recession we had to have’ of 1990 that finished off the plan.

As Victoria emerged from the recession and the eyesore site called for ‘something to be done’, a new planning process began that involved rather than excluded the community. New parameters for the development were set at an Open Forum in 1992.

Mirvac responded to this brief with the concept that became Beacon Cove.

Beacon Cove now enjoys the protection of a planning neighbourhood character overlay which means there is likely to be very little change to the nature of the estate. Like the Garden City bank houses, the estate will remain substantially intact, at least to the street. The foreshore towers have updated their ‘90s colour scheme in favour of contemporary nuanced shades of grey.

An EES for the West Gate Tunnel was released on the 29 May.

Earlier this year, the Victorian Auditor General added his support to various inquiries for the need for legislative reform of the EES process. However, since such reform is not imminent, it confined itself to recommending improvements to the process.

An EES is often a Goliath and David affair. With an impossible volume of material to get to grips with and modelling of bewildering complexity, community members can easily feel overwhelmed and disenfranchised by the process. Proponents are represented by expert planning lawyers at public hearings while community members valiantly represent community and public interest.

Much of the argument around the West Gate Tunnel is that there is no strategic transport policy basis or underpinning to this proposal. But the EES process is not really set up to respond to such an argument. Instead it must confine itself to an evaluation of the environmental impacts of the project itself and how they might be managed.

Early commentary on the tunnel suggests that rather than the project reducing the volume of traffic on the Westgate Bridge, one of the stated aims of the project, a widened Westgate Freeway will add to the traffic load on the Bridge.3

Wurrundjeri Way is proposed to be widened and connected with Dynon Road and the tunnel to form a western bypass of the City. That sounds like severing the CBD from Docklands to me.

Definitely a project to take an active interest in.

Here is some early commentary on the West Gate Tunnel