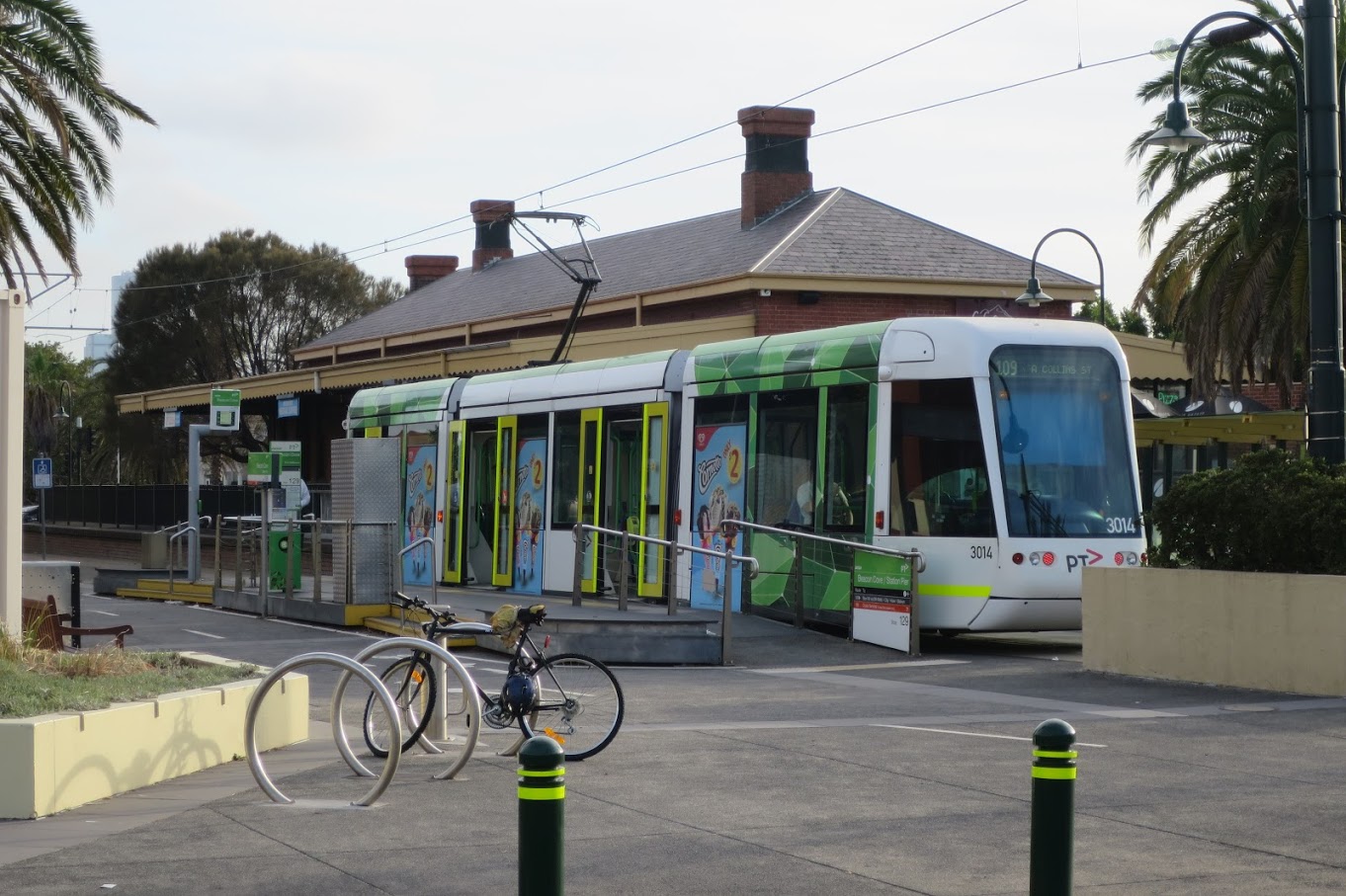 Writer Gideon Haigh warns that “fossicking in the basket of past events”1 is not history. Through making old newspapers available online, Trove2  makes such fossicking an almost irresistible temptation. Precision search combinations enable arrow like targeting of the subject. It’s easier, and often more interesting, than reading the daily paper. And there’s no paywall either.

Preparing for a talk on Politics in the Pub (and other places) I have been immersed in detailed accounts of election meetings in Port Melbourne since the 1880s. The articles give a sense of how many people were present: ‘the room was not inconveniently crowded’, the mood in the room ‘hisses and other marks of disapprobation’, in addition to detailed accounts of the issues of the day.

We find F T Derham, MLA for Port Melbourne, at the Fountain Inn in 1889. Derham is a partner in Swallow & Ariell, the biscuit factory in Port Melbourne. He is also the Post Master General  Unsurprisingly, he is a protectionist, but he emphasises how that benefits employment.

He also promises a sum of £66,000 for improving the Hobsons Bay Railway and contributing to the cost of a new Falls Bridge. This is the route of the present day 109 tram service. Bear it in mind for the rest of the post.

There are less than 70 days to the Victorian state election on 24 November 2018.

Special interest forums are being held throughout the Albert Park electorate in the lead up to the election. Transport was the theme at the Port Melbourne Town Hall on 13 September.

Imbued with the spirit of local newspapers of the last century, I went along to take an account of the meeting. First things first – the meeting was well attended but the room was not ‘inconveniently crowded’.

Mayor Voss welcomed the candidates: local member Martin Foley (Labor), Andrew Bond (Liberal) and Ogy Simic (Green). Bond and Simic are also sitting Councillors at the City of Port Phillip. The order of speakers was drawn from a hat. 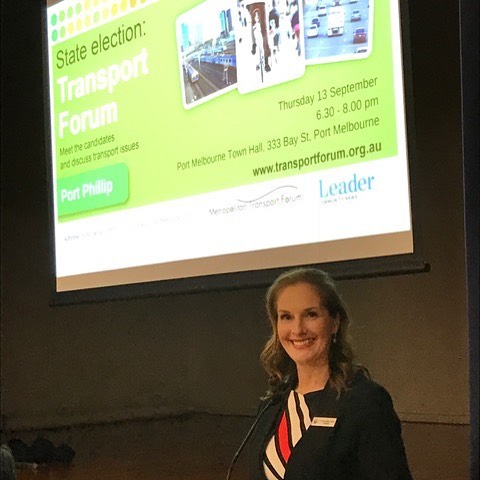 Proceedings began with exemplary courtesy and mutual respect. Sitting member Martin Foley spoke to the Andrews Government’s achievements in removing level crossings and getting Metro 1 under way. He flagged that the suburban rail loop would be built should the government be re-elected. Closer to home he said that “the planning panel report (on Fishermans Bend) is with the Minister, a report to be delivered within this parliamentary term and locked into the planning scheme.’ He indicated that a preferred tram alignment across the Yarra River would be part of that consideration.

Andrew Bond used his allocated time to ‘dish’ the government’s programme and its failure to progress public transport to Fishermans Bend in this term of government. He spoke to his record on Council in supporting the Acland St tram improvements. He also accused the Greens of frustrating the St Kilda Road bike lanes plan, as well as the accessible tram stops in the north of the city.

Ogy Simic is rarely seen in Port except at election time.  His allegiance always comes across as more strongly to the Greens Party rather than to the community he represents.

Questions from the audience elicited rather more information than the prepared speeches and gave an insight into local transport concerns.  First to the queue at the microphone were those who asked questions of a more transport philosophical nature such as ‘when we were going to make a shift from car dependence to sustainable transport?’ and ‘when will we see an integrated transport plan rather than the announcement of a sequence of projects?’

The impact of cruise shipping on Port tram commuters and the Port community was probably the single biggest issue raised. Questioner Julie suggested that a shuttle service on the 109 would obviate the need for extra trams since most people only travel to the city, not beyond.

Andrew Bond declared that “quite frankly, the experience of cruise ship visitors is appalling”.  All agreed a double track and  proper terminus (as la Acland St) was needed at Beacon Cove.

only a single track

A possible key to resolving the unsatisfactoriness of where the Port meets Port Melbourne lies in the Government’s recent allocation of $5.8m to the Victorian Ports Corporation to undertake a study recommending improvements to Station Pier and surrounds to benefit cruise ship passengers and the wider community. Martin Foley also indicated that the recent Ministerial call in of the application for 1-11 Waterfront Place was part of enabling the Port to plan taking the broader precinct into account. 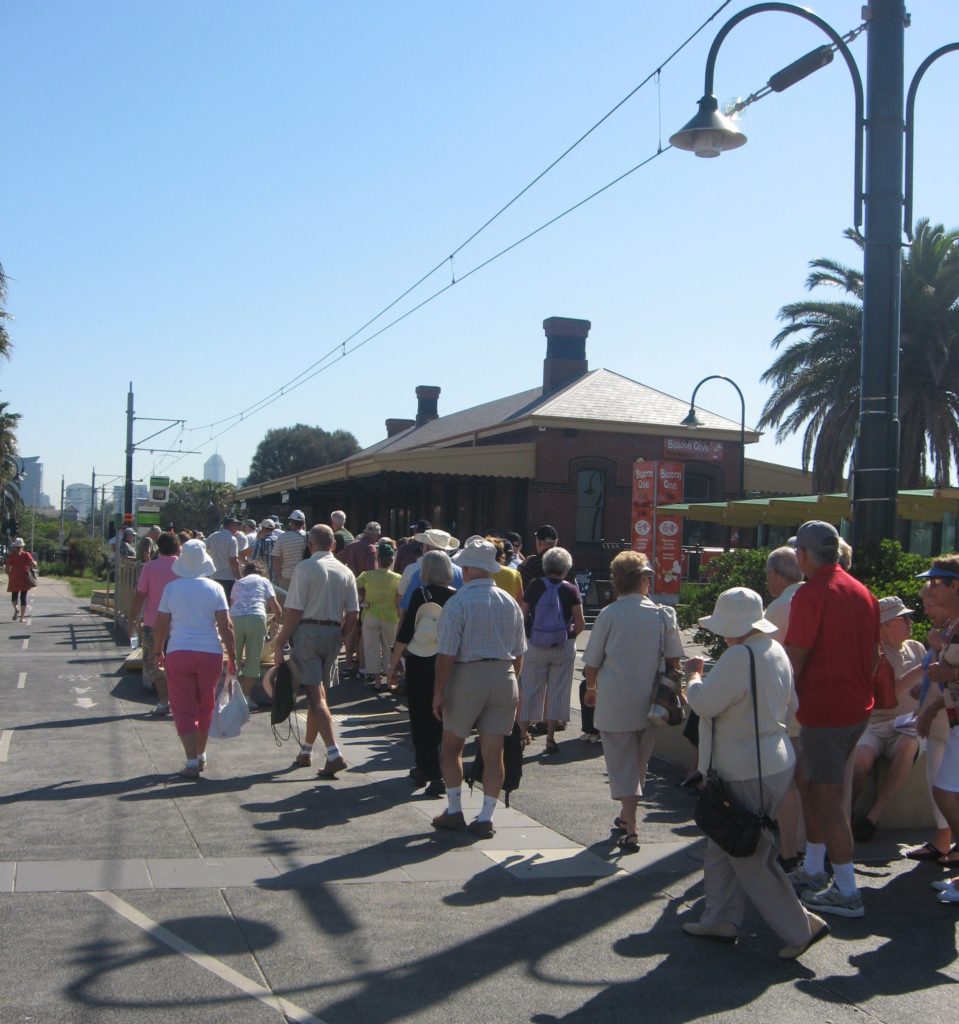 The protected, separated bike lanes on St Kilda Road still seem to be a long way off with issues around St Kilda Junction and Anzac Station yet to be resolved.

All agreed that successive governments performance on accessible tram stops was way behind, with Disability Minister Martin Foley declaring it ‘a stain on our collective national conscience’.

On road priority for the 235 bus service, a daily frustration for bus commuters, was not even on the radar of the candidates – with all taking it on notice.

1Gideon Haigh The Future of the Past Melbourne Knowledge Week 9 May 2018. To the best of my knowledge, this excellent talk has not yet been podcast.

2Trove describes itself this way: Trove is a platform on which new knowledge is being built. It is a collaboration between the National Library, Australia’s State and Territory libraries and hundreds of cultural and research institutions around Australia, working together to create a legacy of Australia’s knowledge for now and into the future.