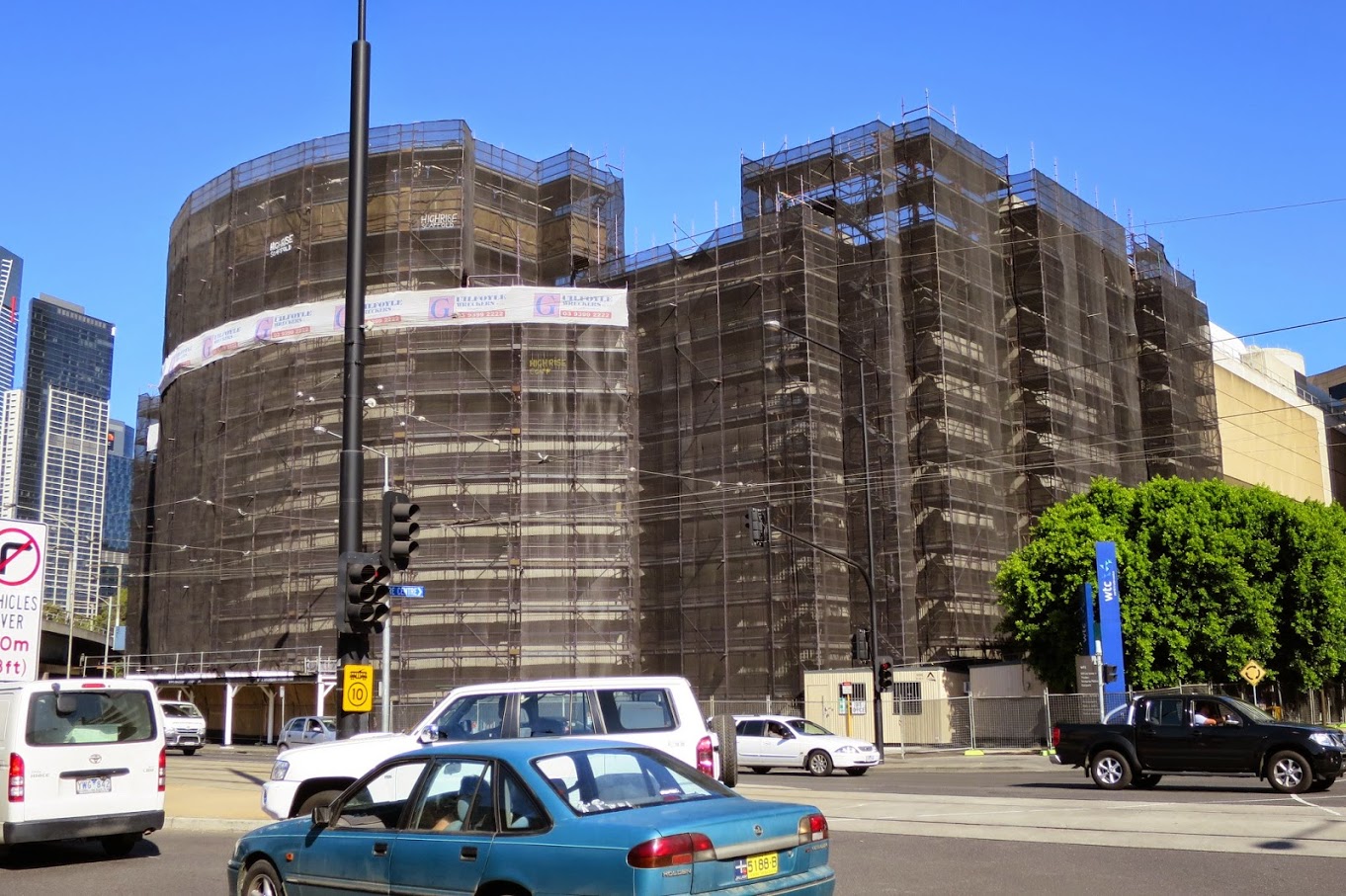 John Lack, the historian of Footscray, bemoans the quality of today’s local papers.1 He wonders where future local historians will find the detail of the debates in councils that were covered in local papers of yore.

The audio recordings of Council meetings are an excellent source. While they may not be everybody’s idea of a fascinating podcast, they give a great insight into the arguments that lie behind the dry documented decisions.

I tuned into the debate at the City of Melbourne on the amendment to a planning application for 7-23 Spencer St. Dull? Not at all.

7-23 Spencer St is the address of part of the former Melbourne Convention Centre, demolished over several months in 2016. There was no fight to save the building, no petitions taken up.  Yet every architect and building style has its adherents, and  Urban Light captured some of the textures of a building many of us have passed by. In exploring for this piece I learned that the architect, John Andrews, was ‘arguably the most internationally significant Australian architect of the past half-century’.2 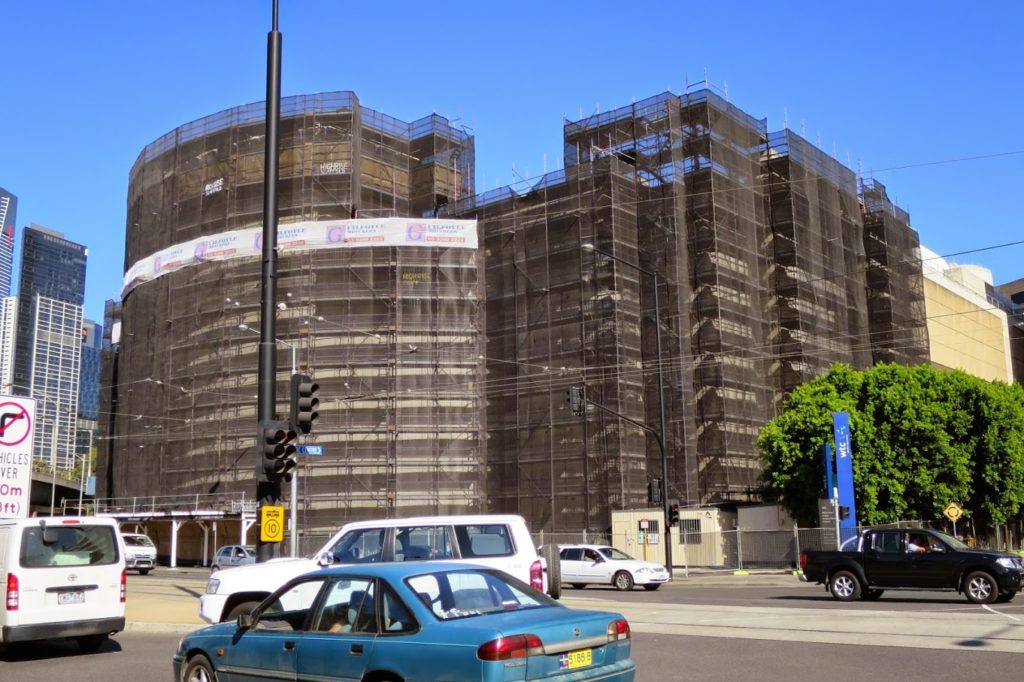 shrouded before demolition in 2015

Massive projects like these have long histories. The market changes. Owners change, architects change, and sometimes planning schemes change to reflect community values that have come to the fore.

The site, formerly owned by Riverlee, is now owned by the Century Group. Architects Elenberg Fraser designed the first scheme, and the new scheme is by Fender Katsalidis, also the architects for North Bank Goods Shed, just a bit further downriver.

A planning permit for the site had already been granted by the Planning Minister in 2016 but an amendment to it was sought. The amendment changes the mix of the development, reducing the number of apartments from 1,060  to 621 and including a Regis Hotel. The scheme also included 20 affordable housing units, negotiated by passionate housing advocate Robert Pradolin who argued at the Council meeting that ‘lack of affordable housing is a long term cost to our economy and society’.

What was the catch? What was not to like?

The amended scheme increased the amount of overshadowing of the Yarra River on 22nd June, the winter solstice.

All Councillors were effusive in their praise for the design and the contribution it would make to this dead end of the city.

But Deputy Mayor Arron Wood was not persuaded that this should be an either or situation. He said  “it’s a little bit galling to say it’s a choice between overshadowing and affordable housing. We’re better than this.  We can do the affordable housing  and comply.” He argued that it broke the rules, set a precedent and that open spaces become even more important as the city continues to densify.

After a most civil and respectful debate, the Council voted to advise the Minister that, while it supported the development, it did not support the overshadowing of the Yarra.

The Minister issued a permit. He argued that “though the proposed amended building height will slightly increase overshadowing to the Yarra River, the impact is considered to be limited and offset by the public benefits of new affordable housing and public space.”

The marketing for Flinders Bank claims the River, even though it is not actually on the riverfront, and yet it robs the very asset that gives the development its value.

Rather than leaving the site hoarded and boarded up while planning and other matters are finalised, the City of Melbourne required a temporary park. It reveals, for a short period,  views of the World Trade Centre. 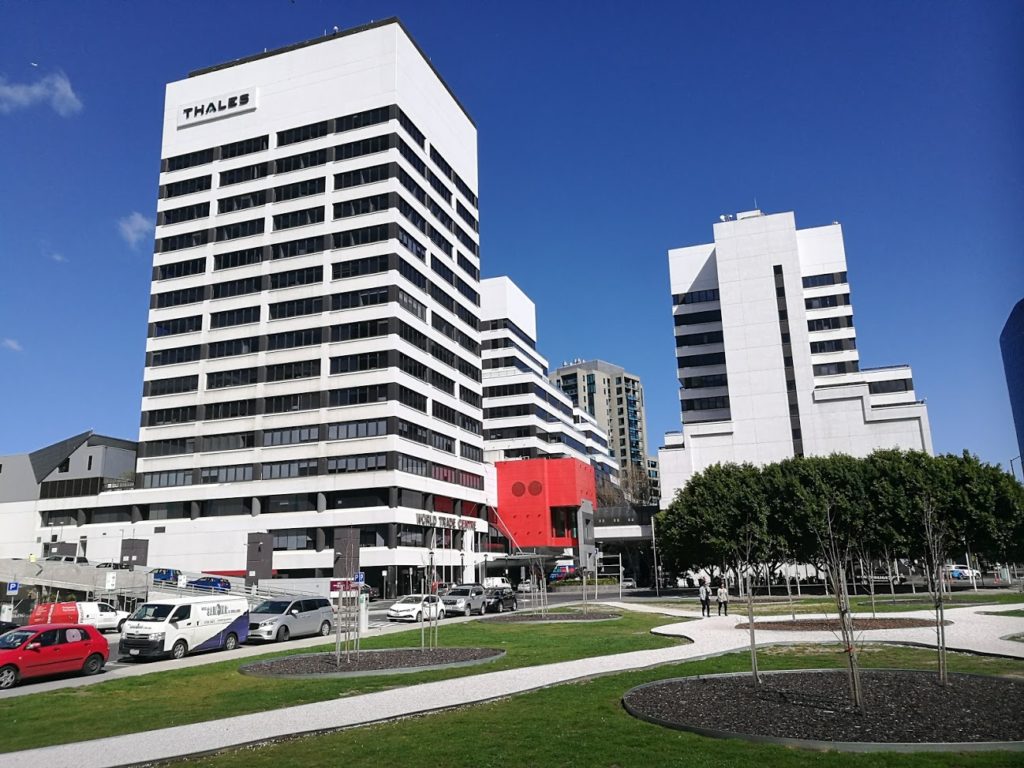 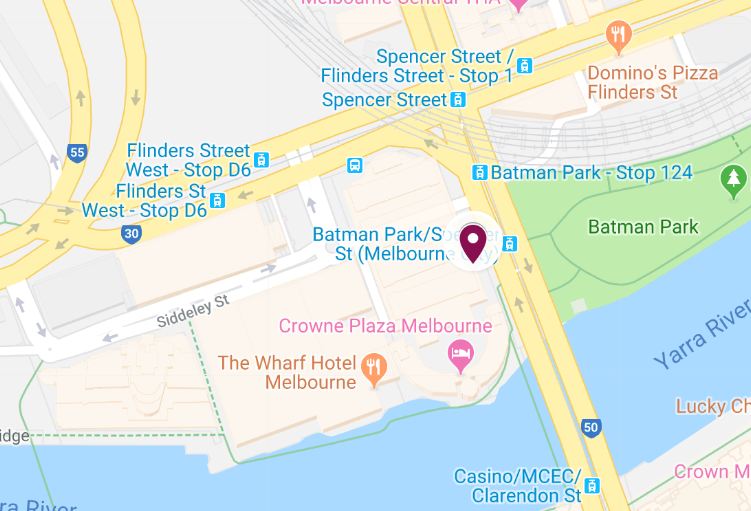 Marked with the rusty red flag