From coal to solar

There was a time when black coal from Newcastle arrived at Town Pier at the end of Bay Street, Port Melbourne. The supply was erratic. The coal was transported via a small horse drawn tram to the Gasworks to be made into town gas.

The production processes were dirty. Workers baked the coal in retorts in hellish conditions. Black dust clothed surrounding streets. The Gasworks provided access to a more convenient form of energy as well as to jobs.

The finessing of the technology to turn brown coal into electricity and the discovery of natural gas was the end of the Gasworks.

Since then our electricity has been transmitted from the La Trobe valley leaving the city undisturbed by the troubling amenity consequences of its generation and distances us from thinking about the greenhouse gas emissions associated with its production.

Under the veneer of the green grass at Gasworks, the toxic waste of those industrial processes lies buried, haunting our present.

Meanwhile, on some  houses around the Gasworks, solar panels  turn their faces to the sun. Energy production once again becomes visible. 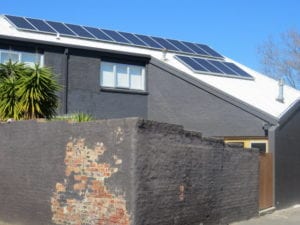 This week Tim Flannery spoke of the inexorable fall of the unit cost of production of solar panels, and the rapid advances in battery storage. This gave a faint glimmer of hope in the week that the recommendations from the review of the Renewable Energy Target were released. Since the repeal of the carbon tax, Australia’s greenhouse emissions have once again resumed an upward trend leaving a legacy of pollution as well as a changed climate for future generations.

To see the number of rooftop solar units by postcode, click here.