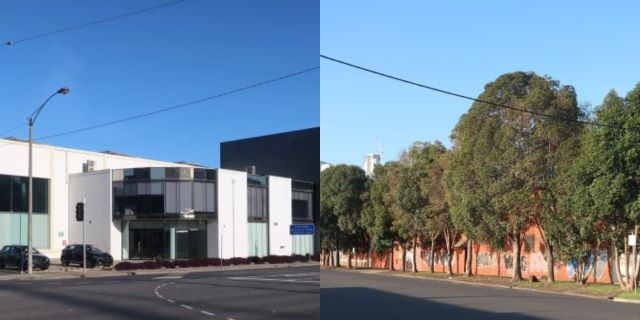 One of the largest development sites in the Montague precinct of Fishermans Bend has recently received a planning permit for three towers of 38, 24 and 15 storeys.

The original planning application submitted in October 2017 was for three towers: two of 40 storeys, and one of 37 storeys.

The triangular site is bounded by Montague, Munro and Johnson St. Drivers may know the site from driving along Montague St towards the City, whereas cyclists may know the Johnson St frontage which is a safer way to access the Montague St x M1 intersection. It was formerly a Mazda dealership and showroom.

The site is beautifully highlighted on this Mahlstedt plan which shows that it was formerly part of the extensive operations of Dunlop.

The approved application includes a childcare centre and 20 units of affordable housing. The towers are separated by a public plaza and two public pedestrian connections – a north/south connection and an east/west link.

The developer is Gurner and the architects are Cox1.

2 – 28 Montague St was one of the 26 applications ‘called in’ by the Minister for Planning in February 2018 ahead of the Planning Panel which reviewed the draft Fishermans Bend Framework. Approving them, he said, would undermine the intent of the draft Framework and deliver a density greater than Southbank. He promised that after the adoption of the Framework the applications would undergo further scrutiny by an independent advisory body.

This is what has now happened. A Standing Advisory Committee was appointed to review and attempt to mediate between the more open and flexible arrangements applying when the applications were first submitted with the more rigorous requirements of the final Fishermans Bend Framework.

The Standing Advisory Committee (SAC) which included the Victorian Government Architect, Jill Garner, considered a revised application over 5 days in April, hearing from the developer, the City of Port Phillip, and government planners.

All agreed that the site was suitable for the kind of development proposed since it was an island site with ‘robust’ street frontages and no sensitive interfaces.

The applicant contended that the site was a Gateway to Fishermans Bend and therefore the heights applied for were warranted. After much back and forth about the meaning of a ‘Gateway’ in the context of planning more broadly and the Fishermans Bend Framework in particular, the Committee concluded that ‘whilst it may not be a gateway in planning policy, there is no doubt in the Committee’s mind that it is a gateway site in fact’2 and could ‘carry the proposed height’. While the SAC accepted the height of Tower 1 at 38 storeys, it recommended that the height of the second tower be reduced from 28 to 24 storeys.

Finer design details, such as the materials and design of the podiums, remain to be resolved.

Gateway is also the name given by the Victorian Electoral Commission to one of the three wards of the City of Port Phillip in 2015. The Fishermans Bend precincts of Montague, Sandridge and Wirraway are all in the Gateway Ward. Three councillors are to be elected for Gateway Ward at the council election on Saturday 24 October, though postal voting will open on 6 October. Nominations for the Port Phillip Council open today, 17 September, and close on Tuesday 22 September.

Two other developments which have also been through the Standing Advisory Committee were also announced on 9 September.

The places referred to in Gateway are marked on this map.