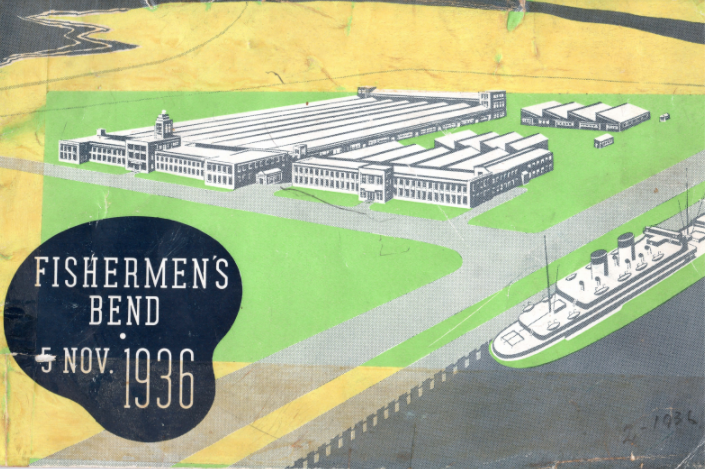 The arrangement and layout of the streets and sites on the Yarra River side of City Rd and Normanby Rd have always been a bit of a puzzle to me. The sites are large and irregular. The tight, neat urban structure characteristic of residential South and Port Melbourne just doesn’t apply.

Many of these sites are the subject of development applications and approvals in Fishermans Bend.

Miles Lewis, in his Architectural and Historical Study of South Bank, explains how the port wharves on the Yarra River influenced the kinds of businesses that located there. The large sites related to the requirements of the industries and businesses conducted there – such as timber merchants, Dunlops, ship repairs and so on. Most of the sites were leased rather than owned so there wasn’t much incentive to invest in expensive buildings. The buildings and yards were functional rather than fancy. In addition, the land was swampy. It was emphatically not suited to residential development.

Daley evokes the ‘crowded sphere of energy and action’ that characterised this part of South Melbourne. “There are metal-working and engineering in every varied branch of operations, timber-yards, furniture factories, shop fittings, stone cutting and polishing, asbestos, cement . . .” the list goes on and on. Just a glimpse of this can be peeped through a hole in the hoardings of a development site on the corner of Clarendon St and Haig St.

As industries sought to expand, interest turned towards the expanse of Fishermans Bend.

In 1931 General Motors-Holden (GMH) acquired premises in City Rd. In the five years they were located there, they assembled over 75,000 cars.

The lease was running out on the City Rd site as Australia was coming out of the depression. Laurence Hartnett, Managing Director of GMH, was looking for a new factory site that would allow for expansion and give a sense of the stature of the industry that he envisioned. Hartnett chartered an aeroplane to get a sense of suitable sites for a factory. Neighbouring Fishermans Bend – close to the city and to the River – caught his attention. At that time, Fishermans Bend was colloquially referred to as ‘Siberia’ denoting its sense of remoteness, scale and expanse of ‘nothing’. It is interesting that Fishermans Bend is so often best understood from the air as the scale and extent of it is hard to take it in from the ground.

Having identified a preferred site, Hartnett entered negotiations with the Victorian Government about acquiring the land. At the time the site was licensed for sand removal but the license holder had failed in his obligations to fill up the holes after the sand was removed – a not uncommon failure in this poorly regulated industry. The Government was, at first, reluctant to sell Crown land which was reserved for public purposes. At that time discussions were very much alive about locating a future airport at Fishermans Bend. In the end, the Metropolitan Town Planning Commission’s recommendation to reserve the land for industry in association with housing for workers was influential on the Government’s decision to sell the land. The Government hoped that other industries would follow the lead of GMH, which they did, with the Commonwealth Aircraft Corporation buying land next door. Many other related industries clustered around the GMH site.

The sale of 50 acres ‘or thereabouts’ was finally negotiated for £400,000. The sale required its own Act of Parliament, The South Melbourne and Port Melbourne Land Act (22 July 1935).

It was an audacious move. A new factory was created on a site without power, water or electricity and within 7 months, cars were assembled there. The stage was set for GMH to take a lead role in wartime industrial production, a role it was to assume within a few short years.

Ownership of the GMH site returned to the Victorian Government in 2016 when it was purchased from Holden for $130m.

The Government’s intention is for this key strategic land holding to become a site for advanced manufacturing, engineering and innovation. The University of Melbourne has committed to moving its Engineering and Design Campus to part of the site by 2024.

This investigation was made in preparation for Engineered on the Bend, an online walk hosted by the City of Port Phillip on Sunday 27 June from 2 to 3 pm which I will be presenting with David Radcliffe. Bookings are still open and you are welcome to attend.

Some of the material for this post has been drawn from the excellent online archive of the Holden Retirees Club. The archive is rich, accessibly organised and well cared for.