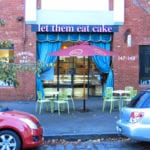 I do my best to avoid jargon on Port Places. However, the number of times Joe Hockey said ‘heavy lifting’ on budget night took hold in my mind this week.

I find it intriguing how words take flight from their physical anchoring and become metaphorical.

In the early Port days there was a lot of seriously heavy lifting. A whole group of workers were described collectively for carrying heavy loads – lumpers.  People living today can still recall carrying bags of barley on their backs on Princes Pier.

In Port Melbourne there have been times in the past when poverty and unfairness have provoked people beyond tolerance. The depression hit Port Melbourne early – more ships, fewer cargoes. Waterside workers had to turn up twice in one day just in case there was work. Often there wasn’t.  Heightened tensions on the waterfront gave way to open conflict in the strike of 1928 when Allan Whittaker was shot by police. Some workers did not work again for many years after that – feeding their families as best they could. People moved from house to house unable to afford the rent. There were no protections or benefits in place beyond the support that community members offered each other. The bitterness and hardship of that time scarred many families.

Now the government seems hell bent on returning to those deeply polarised days that people thought were part of the stories we tell about the past. The budget exacerbates the effects of pre-existing trends to the casualisation of work, reduced benefits, and erosion of hard won conditions.

The heavy lifting of this budget is to be borne by everyone apart from the wealthiest in the country. Jeffrey Sachs, in this week’s Melbourne Conversation, put the student protests in Melbourne squarely in an international context of student unrest around the world from young people wanting to gain a foothold in the economy. He spoke of ‘a crisis of fairness, and the indifference or deadening of the moral impulse’.

Although Marie Antoinette has apparently been misquoted for hundreds of years for saying ‘Let them eat cake’, Joe Hockey’s cigars have quickly become as powerful a symbol of that indifference.