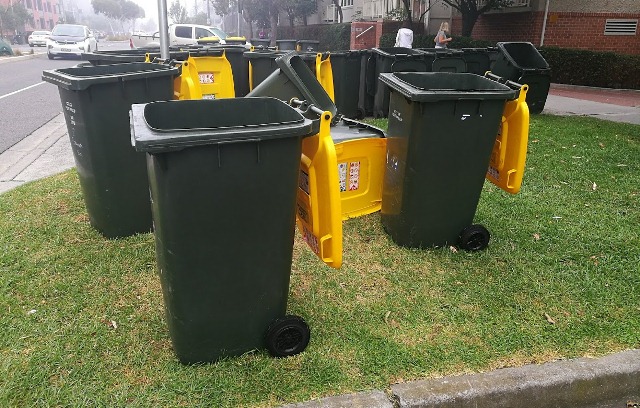 Some say that the primary business of local councils is ‘roads, rates and rubbish’. It may be a satisfying slogan but doesn’t stand up to much examination. Apart from anything, ‘rubbish’ with its slightly pejorative associations, is an antiquated notion as we drag slowly towards a more circular economy.

A report to the Port Phillip Council on 5 August, Recycling Reset, detailed the impact of COVID-19 on the volume of recycling generated and what that means in dollar terms.

It seems that during the first lockdown many took the opportunity to clean up. People flocked to the Resource Recovery Centre leading to queues in Boundary St necessitating traffic management and staff to manage social distancing. Visitation increased from 50 a day to 90 – 100 per day. This came at an additional cost of $38,000 per month.

We’re spending more time at home and there’s more in the bin. Recycling has gone from a pre-Covid average of 778 tonnes per month, to an average of 876 tonnes per month. The cost is put at an extra $11,000 per month. There is also an increased level of contamination of the recycling – up from 10% to 20% – resulting in a cost of $18,900 in June alone.1

2019 was a year of crisis in waste management. China refused to accept our contaminated recyclables, SKM recyclers collapsed and the whole flawed model on which our recycling was based was exposed.

In a belated response to a crisis that had been brewing for more than a decade, the Victorian Government released a ten year plan: Transforming recycling in Victoria.

A headline from the plan is a goal to divert 80% of waste from landfill by 2030, with an interim target of 72% by 2025. To drive this change, as well as to reflect the increasing amount of waste and decreasing amount of landfill, landfill prices have been set to strongly discourage sending waste to landfill. The cost per tonne to send waste to landfill will almost double from the current $65.90 to $125.90 in 2022-23.

Everyone can find ways to reduce what goes to landfill. When glass breaks in recycling bins, it contaminates the contents. That is why some Port Phillip neighbourhoods with more space now have a separate bin for glass. Shared bins for glass have been placed in reserves in South Melbourne – at Lyell Iffla Reserve, Sol Green and cnr Park & Nelson Sts.

At the turn of the 20th century, the Port Melbourne Council approved a request from Jonathan Timothy Turner to conduct a 3 month trial of his incinerator destructor. The problem of what to do with fish offal and other waste had been preoccupying him for years.

Turner was granted a lease on land down the far end of Williamstown Rd near Prohasky St – an area then described as ‘sandy waste’ – where he conducted his experiment between December 1907 and April 1908. Turner took out a patent for his device. In addition to his waste experiments, he was ‘self supporting’ down there on the Bend, maintaining a herd of 29 goats from which he got milk and butter. Food made at home included pickles, chutneys and all food was ‘free from preservatives’.2

Biogone Plastics uses a patented additive to make their disposable products landfill-biodegradable. This means that the plastics will decompose under typical landfill environmental conditions much faster than traditional plastics which have an indefinite life span.  Biodegradation of plastic is achieved by enabling microorganisms to metabolize (i.e. break down) the molecular structure of the plastic, which produces an humus-like material (organic matter that cannot break down any further) which is a natural plant fertilizer.3