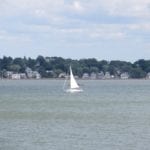 To be in Washington D C is to be surrounded by monumental monuments and stories of leadership.

This week a monument of the living kind was created when President Obama used his executive power to declare a greatly expanded Pacific Remote Islands Marine National Monument, one of four vast protected marine areas in the Pacific Ocean created by President George W Bush under the Antiquities Act, a 1906 law. (NYC 18 06 2014)

The announcement arose out of an Oceans Conference convened this week by Secretary of State John Kerry that focused on sustainable fishing, marine pollution and ocean acidification (Jun 16,17)

President Obama said in making the announcement that

‘like Presidents Clinton and Bush before me, I’m going to use my authority as President to protect some of our most precious marine landscapes, just like we do for mountains and rivers and forests.’ (NYT  18 06 2014)

The New York Times observed that ‘environmental conservation has a long bipartisan support in this country.’

Earlier in the week, we had visited the John F Kennedy Library and Museum. A theme running through the account of that intense Presidency was Kennedy’s great love of the sea. His sailing boat Victura had a central place in the museum overlooking Boston Harbour, providing a modest counterpoint to the otherwise grand scale of the museum.  Kennedy said

‘I really don’t know why it is that all of us are so committed to the sea, except I think its because in addition to the fact that the sea changes and as the light change and ships change, it’s because we all came from the sea.

And it is an interesting biological fact that all of us have in our veins the exact same percentage of salt in our blood, in our sweat, in our tears. We are tied to the ocean. And when we go back to the sea … we are going back from whence we came.’

In 1961 he signed the legislation creating the Cape Cod National Seashore which would provide access for all to the sea and the shore he treasured. (interpretative panel)

‘Most people think the ocean is larger than life, an endless resources impossible to destroy. But people underestimate the enormous damage that we as humans are inflicting on the ocean every day. We run the risk of fundamentally breaking entire ecosystems.’

Such national leadership on oceans is sorely lacking in Australia.