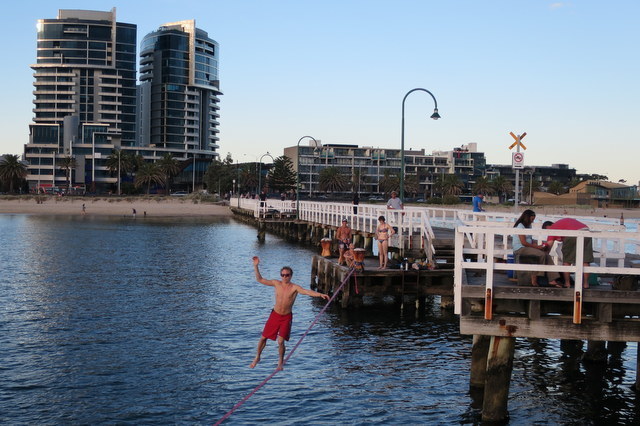 As the days gets shorter – and at last get cooler – sunlight becomes more precious.

Inner Melbourne grows ever denser with most new development in apartments. Melbourne CBD is set to overtake Sydney within the next two years as the most densely populated area in Australia.

This has led to serious concerns about the quality of apartments, over-development of small sites, and the proliferation of very tall buildings (200m+). Public debate has intensified about about what planning arrangements need to be put in place, not only to protect the amenity of future residents, but also to protect the public realm.

The Yarra River and Port Phillip Bay are the key natural attributes of the public realm and of our city, and public enjoyment of them is fundamental to Melbourne’s liveability. One measure of our ability to enjoy these spaces is to ensure that they enjoy access to sunlight, and are not overshadowed for long periods of the day.

In September 2015, Planning Minister Wynne introduced interim planning and development controls into the Melbourne Planning Scheme while permanent controls are being prepared. Among other matters Amendment C262 said:

The construction of buildings and works which would cast a shadow across the south bank of the Yarra River between 11.00 am and 2.00 pm on 22 June is prohibited

In March 2016, Minister Wynne refused an application for 447 Collins St (the former National Mutual Building) because it would overshadow the north bank and reach to the south bank of the Yarra River, as illustrated below. 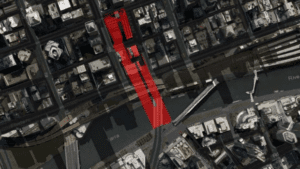 Barely had the commentary died down than the Minister approved a modified version of the development that no longer reaches the south bank of the Yarra, but still shades the north bank.

Overshadowing controls for Port Melbourne were developed in the late 1990s when she shape and form of development along the beach front were being hotly contested. An Advisory Committee appointed by then Planning Minister Maclellan found that an early proposal for the HMAS Lonsdale (south) site, (now hm@s),  ’causes unjustified overshadowing of the foreshore promenade and beach to the detriment of users of this public foreshore for leisure and recreation.’ The Advisory Committee prepared design guidelines for any future proposal which would include ‘no overshadowing of the promenade and foreshore between 10am and 4pm on 21 June.’  The design response was to locate the two towers of hm@s towards the Rouse St rear of the site.

This stringent protection of the Port Melbourne foreshore from overshadowing made its way into the Port Phillip Planning Scheme.

How much, if any, of the foreshore should be permitted to be overshadowed by any future development at 1-7 Waterfront Place in Port Melbourne was extensively aired in developing design parameters for the site. Waterfront Place, originally developed as part of Beacon Cove, was not covered by the overshadowing controls that apply to the rest of the Port Melbourne foreshore.

Amendment C104, approved in June 2015, contains a combination of mandatory and discretionary controls. No overshadowing is to be permitted between 9 and 3 at the equinox but overshadowing should be designed to minimise overshadowing beyond the southern kerb line of Waterfront Place between the hours of 9:00am and 3:00pm at the June solstice.

Between the words ‘must’ and ‘should’ fall the shadow. In planning schemes, must means what is says whereas ‘should’ is not mandatory.

With development proceeding inexorably in a vertical direction, more and more people are relying on public space for their open space. Vertical living is putting increasing pressure on parks and squares. The City of Melbourne is asking people what sunlight in public parks and spaces means to them. Participate in the discussion.