Ross and Ramona Headifen are part of Beach Patrol, a growing movement of people picking up litter on Port Phillip Bay’s beaches. Their local group is Port Melbourne’s 3207 Beach Patrol. You may have seen them emerging from the sea or the beach with litter in hand. Keen swimmers, they will be participating in the Port to Park swim on 6 February.

What made them become so passionate, so dedicated to picking up litter – and how do they maintain their boundless goodwill? I had to find out and interviewed them at their office in Fishermans Bend where their company Fieldtech Solutions makes and supplies sustainable products for the environmental industry.

Where does you passion and dedication for cleaning up beaches come from?

Ramona We spent two years in Tanzania as volunteers with New Zealand’s Volunteer Services Abroad supplying water to rural villages. The work involved sourcing water, and then getting a local drilling company to do the drilling. We made the little concrete slab. Then we’d install a hand pump. What we liked about VSA was the philosophy of skills and knowledge transfer. We saw pumps that had been abandoned for want of a $20 piece. Ross trained people to repair the pumps.

People in Tanzania now have packaged goods and plastic bottles and there’s no kind of collection service like we have here. They just drop stuff on the ground whereas before that would have been something that biodegraded.

Ross At the bus station in Dar Es Salaam it was like it had snowed water bottles on the ground, thousands of them.

That was a catalyst.  We thought ‘What’s going on here?  Something’s not right’.

We went to Florida where our manufacturing friend Bob has his office. We showed Bob how to make  the  world’s first biodegradable  groundwater sampling bailer.  A disposable plastic item sold in the 1000’s.

In addition to making a new product we had to put up a new website. We spent hours and hours researching the internet as to why you should have biodegradable plastic. It was like a Pandora’s box. We hadn’t understood how bad the problem was – for the oceans in particular.

We were staying right on the ocean. Each morning we’d go for an early morning walk on the beach – a beach about a mile long between Piers.

Guess what we found on the shore – the shore of the Atlantic?

It was littered with plastic.  For the first two weeks we kind of ignored it. Then we thought ‘We have to pick this up!’ We were getting into a bad mood so we thought ‘We’re going to have to make a game of this. it’s going to ruin the day. What about we get 5kgs this way, and 5 kgs the other way’ – and then we saw other people doing the same thing.

And we’d say ‘You should come to Australia! There’s no litter there. We don’t have problems like this.’  Little did we know back then.

How did you get involved with Beach Patrol?

We got back to Australia in December 2010 and we saw Guy’s 3206 group on the beach in early January and started talking to him. Tom (Burrows) had just started the 3207 group in Port Melbourne in December. We’ve missed only that first clean. The timing was interesting.

What are you working towards?

We collect data and we know that data is very valuable. We want Beach Patrol to get enough people to have enough clout to get government to listen to us. They say that they don’t want Container Deposit Legislation (CDL) because it is not economically justifiable but that’s been disproven many times.  How do we convince them?

How do you sustain your spirit with the challenge of it all?

Ramona: Some days we don’t.  Somedays we  think – we’re not going to make it. We’re too far gone. Sometimes I get really upset. Most days I think ‘whatever I collected that’s x kgs less for the dolphins and the fish and the birds to deal with’.

Ross: It’s more the feedback. If you feel like you’re making a difference – ‘I  got 2 new sign-ups for Beach Patrol today’, spreading the word. Little wins – like NSW getting CDL. Hopefully, It will come here. Hopefully, we’re contributing to getting that decision being made. It’s those little wins you have along the way even though it is not as fast as you would like.

What do you think needs to happen?

Ross:  Our parents were that post -war generation when everything had a value. We’ve completely lost sight of that. We need to get away from this constant disposable plastic. You don’t need plastic straws, you don’t need plastic bags, plates, spoons.  It’s become automatic. We’ve got to think about it. We don’t need this stuff.

We’ve got to somehow raise awareness.  What plastics should I be using? Is there an alternative? We’ve got to encourage people to recycle more and not use  so much plastic.

What would make the change?

Much more is known now about plastic pollution than five years ago, and there is growing awareness of the problem.

It would be nice if you rewarded people. It just needs to be incentivised. The change would happen immediately.  In Ireland,  they put 15p on a bag. I think in 3 months dropped bag use by 85 % just 15p on a bag.

You’re such a team – it seems you work so well together?

Ramona Ross thinks ‘How can I change that’? He sees the bigger picture. ‘How do you stop the plastic being there in the first place, or how to make a plastic that will biodegrade’. He thinks about how to fix the problem not just band aid it.

Ross Ramona’s like a terrier. We used to take an hour to walk to Catani Gardens and an hour back. Now it takes an hour and a half each way. 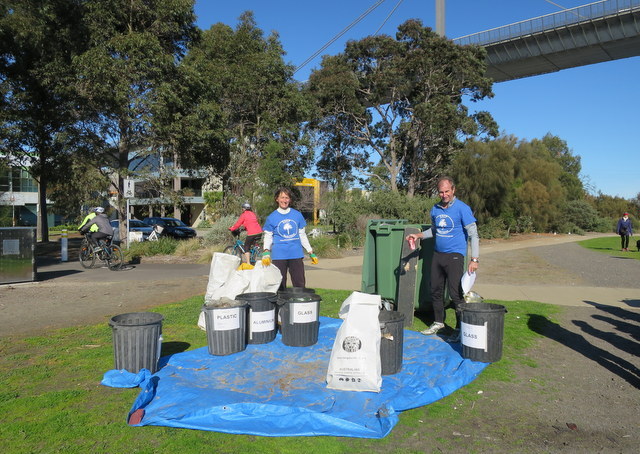 sorting, counting – Ramona and Ross clean up with Friends of Westgate Park and Tangaroa Blue

By mid-2015 there were 18 Beach Patrol groups around Port Phillip Bay. The Kingston and Bayside groups received community awards from their Councils on Australia Day.