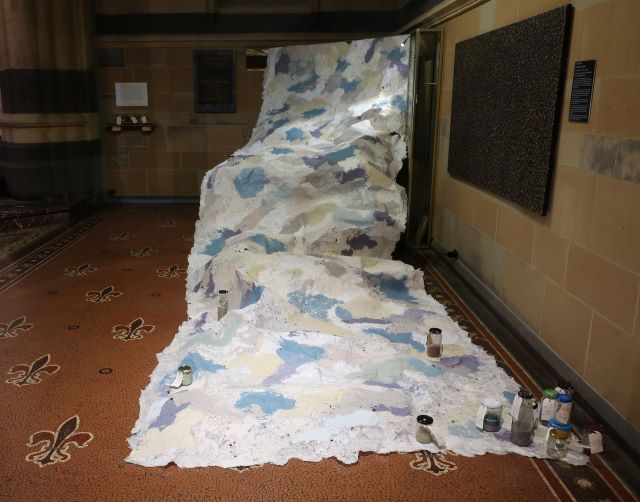 The Yarra River downstream of the Westgate Bridge flows between neatly constructed boulder banks before opening out into Port Phillip Bay.

The River’s course has been massively changed since first settlement. The River banks were once diffuse, blurring into the wetlands of the estuary. From time to time, but cyclically, the River would flood bringing with it rich material from the forested catchment to nourish the wetlands which in turn gave life to birds, fish, eels which sustained gatherings of the clans of the Kulin nation.

In 1863 a flood of ‘unexampled severity’ devastated Melbourne, sweeping away wooden houses in Richmond and Collingwood along with the carcasses of fowl, sheep and pigs. The area from Sandridge to Melbourne was under water with only Emerald Hill rising above the floodwater. The River forced open a new mouth to the Bay, exiting south of the Sugar Works, near where Dow & Rouse St, Port Melbourne is today.

Flooding and the difficulty of navigating the Yarra in ever larger ships were major problems for the colony. The newly constituted Melbourne Harbour Trust engaged engineer Sir John Coode to make recommendations for harbour improvements and managing flooding. Coode recommended that the troublesome bend in the River be bypassed by digging a canal through the sandy land. The Canal would both improve the navigability of the River and reduce the flooding risk.

Now we think of the Coode Canal as the River itself.

In his book Blue Lake, David Sornig introduces Lauder Rogge. Rogge was a seaman who secured a mooring from the Melbourne Harbour Trust for his worn out vessel, the John Hunt, on the now discarded loop of the Yarra River. Although Rogge had been naturalised, he was interned during the First World War because of his German background. Conditions in internment camps were shocking. When he was released after the war, he retreated to the decaying John Hunt where he lived in the company of, and protected by, many dogs. He upheld his right to the mooring while the River withered beneath him. The Harbour Trust completed filling the old course of the River and the John Hunt was left high and dry.

Coode’s Canal has now become the River in our understanding.

The Act required the development of a community vision which would drive a Yarra Strategic Plan (YSP). Now that plan has been prepared and our contribution is sought.

The draft YSP lists the manifold challenges faced by the River: declining rainfall leading to reduced flows, a hotter climate, more impervious surfaces from intensifying urban development and pressures on recreational land. It attempts to integrate the efforts of the many different agencies, authorities and local councils who have responsibility for the health and protection of the River.

How can we imagine a healthier Yarra over the next ten years with all those challenges? Perhaps it is first to develop or deepen our relationship with the River.

‘Have you been in it? On it? Touched it?’ gently probed Emma Telfer, former Director of Open House Melbourne, speaking about our relationship with the River.

‘Living Water’ is an exquisite installation in St Pauls Cathedral of a large scale 8 metre by 2 metre river-paper made from donated fabric, paper and contributions of Yarra River water. It was created by artist Annique Goldenberg with the St Pauls community.

Anna Ridgway is a dedicated custodian of the River bank at Abbotsford – caring for this steep and long neglected place fiercely and tenaciously. She contributed a jar of Abbotsford River water to the installation.

Anna writes of ‘Living Waters’: ‘This ephemeral work is to be seen up close. Its delicate, flowing, filigreed loveliness echoes our Birrarung and our intertwined life journeys with it. Our little mustard jar bore a scooplet of river water from Abbotsford by train to the city’s heart. It perches above a mini river of twinkling glass jars – all reminding us the Yarra is inseparable from each lowly piece and scrap that form the tide of our community’s life.’

Participants will also record a whispered message to the river which will become part of the installation.

Show your love for the Yarra. Provide your feedback on the draft Yarra Strategic Plan by the end of March

David Sornig Blue Lake: Finding Dudley Flats and the West Melbourne Swamp Sornig writes compassionately about the people who found a home at Dudley Flats and evokes the strangeness of that close but far away part of Melbourne.

Annique Goldenberg Visit the river paper at the Macartney Chapel, St Pauls Cathedral to the end of April