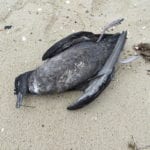 Do you remember when Port Melbourne’s beaches were littered with dead birds in November last year? It was part of a great ‘wreck’ of Short-tailed Shearwaters down the coast of Australia. Although a naturally occurring phenomenon, the extent, scale and more frequent recurrence of the wreck has prompted debate and inquiry. One thing was certain – when the birds arrived, they were starving. The Shearwater feeds on krill, small fish and other small marine creatures.  The cause of the food shortage along their migration journey is not as confidently understood but is explored in the March 2014 issue of Australian Birdlife.

The Shearwaters are about to head off again to the northern hemisphere from their breeding grounds including Phillip Island, Port Fairy and Bass Strait. Their strong wings, over a metre in span, will take them on an amazing journey of 15,000 km in 8 weeks. They can go as fast as 85 km in an hour.

Each breeding season, pairs lay just a single white egg.  Both parents share the incubation in 12-14 day shifts over an average of 53 days. Their chicks, born only in January, will leave later in April.

It’s a full lunar eclipse tonight. The Shearwaters are also known as moonbirds.  If you are down at the beach tonight, wish the  Shearwaters leaving Australian shores well. If we do not see them washed up on the beaches of Port Melbourne in November 2014, it will be a good sign.

Birdlife Australia has created an exceptional website Farewell Shorebirds to enable us to see the world from the migratory birds’ perspective.