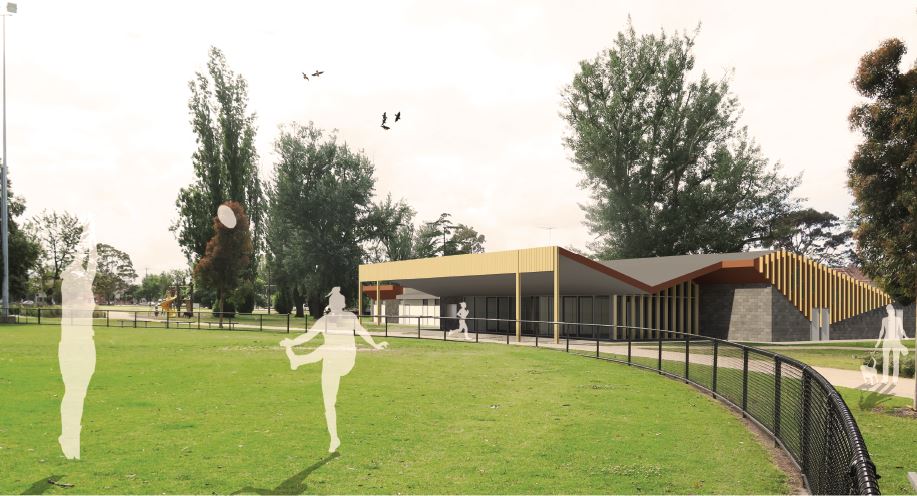 The $4.3m upgrade of the Murphy Reserve Pavilion has been completed. It was to have been opened on Sunday 22nd March. The plaque announcing its opening has been removed – awaiting an uncertain future time when people are free to gather again.

The purpose of the upgrade was to facilitate the increased participation of women and girls in sport by adding more changing facilities – from four to eight change rooms. And then it made sense to refresh the weary and stale smelling Pavilion after intense use by sporting clubs over 17 years and anticipate future demand. The building footprint is now 600 sqm bigger than it was before.

The Pavilion conforms exactly to the architectural render used in the community consultation. Apart from the extensive changing facilities (to the left of the Pavilion) the notable feature of the new Pavilion is the very spacious veranda providing shelter as well as a view of the (ghost) game.

The project was not without its critics and its casualties. While the improvements were welcomed by impatient sporting club tenants, the removal of some very large trees to make way for the expanded footprint was not.

The generosity of the funds assembled from the Council, the State and other parties for the upgrade also generated debate about the disproportionate resources directed towards ‘formal’ versus ‘informal’ recreation. Sporting clubs are organised and represent their needs strongly to the Council whereas the dispersed walkers, dog walkers and joggers do not cohere influentially in the same way. The health benefits of all the activities are beneficial and in the 12ha Reserve there is room for them all.

I’d always been puzzled about why the corner of the Reserve where the Depot used to be had been excised from the Park and zoned for public purposes rather than as a park. An incidental find in a file on the Sandridge Lagoon at the Public Record Office of Victoria offered the explanation. Port Melbourne Council maintained a two acre depot on the reclaimed lagoon. The Council needed to move the depot to release the reclaimed land. A site was made available in Murphy’s Reserve “to enable the storage of materials and plant which will be used to a great extent constructing roads and drains at Fishermen’s Bend”. [1] It was that decision, over 70 years ago, that meant the land could be set aside for the Fishermans Bend Secondary School.

On the Plummer St side of the Reserve, the perimeter path is lined with trees of stature offering shade and great presence: cottonwood poplars and Lombardy poplars among the eucalypts. Poplars aren’t planted anymore. They were popular tree choices in the ’50s when the Park was formed. A memorable attribute of the cottonwoods is the way the back sides of the leaves shimmer silver in a breeze.

J L Murphy Reserve is named after James Laurence Murphy who came to Australia from Cork in Ireland in 1880. He was a manufacturer of cordials and aerated waters. Murphy represented Port Melbourne in the Legislative Assembly from 1917 to 1942 while also being a Councillor of South Melbourne from 1904 to 1942. Murphy’s civic dedication did not lessen with his length of service. His ascetic appearance belied his energy. He was an extremely active representative and his voice and words can be heard in the many newspaper accounts in Trove of the meetings he addressed and the deputations he led. He was a particularly strong advocate for affordable housing in Fishermans Bend after the First World War. He believed in the benefits of a healthy environment. His experience in Ireland of seeing men shot while protesting peacefully “made him a fighter for the underdog, and as such he will always remain.” [2]

The Reserve will also serve the future residential communities of Fishermans Bend as well as the new Secondary School currently under construction.

While no sport can be played at present, the generous reserve allows ample space for physical distancing. When a walk, or a run, is all that is permitted, feeling the grass underfoot on the lush oval or the presence of those trees is a rare pleasure in indoor constrained days.