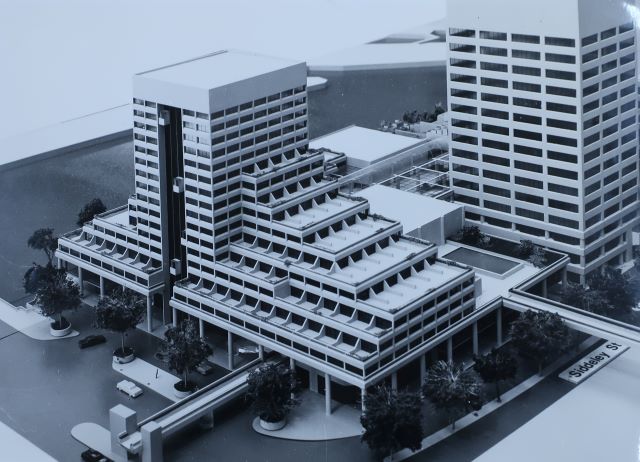 The tapestries Port Reflections and Port Impressions hang in the terminal building on Station Pier but this was not their original home.

Here’s the back story.

The Melbourne Harbor Trust (MHT) turned itself inside out to prepare the port for the arrival of the first container ship in 1969. Container ships needed completely different infrastructure from shed and wharf structures such as those at Central Pier, featured last week. They needed large expanses of flat concrete hard stand. A new dock was created out of swamp land. The drive and determination to prepare the Port for this massive change came from Victor Swanson, Chief Commissioner of the Harbor Trust, after whom the dock was named.

At first there were doubters. Some people weren’t convinced that containers were here to stay. But within a decade there was no question that containers were the future. The revolutionary new technology was a standardised box. The unit of measure remains the TEU, Twenty Foot Equivalent Unit.

Accompanying the optimism associated with the early container period was the growth of the World Trade Centre movement around the world. Guy Tozzoli, the driving force behind New York’s World Trade Centre, was the main proponent. Aspirations for World Trade Centres were high – promoting international relationships through trade. The MHT shared the enthusiasm. The Port had the land and the influence to persuade the government of the benefits that a World Trade Centre would deliver. Enabling legislation was passed to facilitate the construction of a World Trade Centre on the banks of the Yarra immediately downstream of the Spencer St Bridge. It was near the city, but not in it, the first major development to the west of the Hoddle grid. The old fashioned name of Harbour Trust was jettisoned in favour of the more modern Port of Melbourne Authority.

By the time Premier Hamer drove the first pile to start construction of the World Trade Centre in 1975, world trade had doubled. At the same time, bit by bit, land was being reclaimed at Webb Dock to serve the Tasmanian trade.

The galleria was to be the focal point of the new World Trade Centre, suitable for trade exhibitions and displays. Tapestries were commissioned from the newly established Victorian Tapestry workshop befitting the significance of the new building. They were Port Impressions and Port Reflections. I hope to tell you more of their design and making in a future post.

The tapestries depict a narrative of progress from the early days of the port – moving from the powerful symbols of the wool bale and the hook to the colour, energy and promise of the container era.

Since its foundation in 1876, the Port has always been looking ahead – at the trends in shipping and trade – and ensuring there is enough land to support its operations. The health of the Port and of the Victorian economy have always gone hand in hand. And before you protest that containers bring unnecessary ‘stuff’ (which they likely do in part) they also bring the daily coffee as well as the bicycles, cars, wind turbines.

The Port has recently released its forward Development Strategy to 2050. The major growth and intensification of port container activity will be at Webb Dock which will be able to accommodate the larger, longer and wider, ships anticipated in the future. Larger ships will not be able to access Swanson Dock. In the decade between 2008-09 and 2018-19 the average size of a container vessel grew from 2,653 TEU to 4,582 TEU. However, in the medium to longer term, container vessels of between 13,000 and 14,000 TEU capacity are anticipated.

Every container that arrives at Webb Dock needs to leave Webb Dock for distribution throughout Melbourne. At present that is through the recently built intersections at Webb Dock Drive and Kooringa Way. The volume of containers anticipated will make that situation untenable. Load limits on the Bolte and Westgate Bridge will further constrain the growth of Port truck traffic. The Port is now pursuing freight on rail with determination as it will no longer be able to function effectively without it.

The Port Development Strategy shows an indicative rail freight route along the edge of (a further reclaimed) Webb Dock and then following the existing rail alignment through Westgate Park, along Lorimer St to cross the Yarra on the Bay side of the Bolte Bridge.

The Victorian Tapestry Workshop, founded in 1976, is now the Australian Tapestry Workshop (ATW) and grows in reputation locally and internationally from year to year. The ATW is currently hosting an exhibition of the gowns designed by Linda Britten for Deborah Cheeetham AO to sing the pieces she composed for the nine tapestries in the Embassy Tapestry Collection. Unsurprisingly the performances to accompany this exhibition are sold out but anyone can view the gorgeous gowns and the tapestries to which they respond at the workshop on Park St, South Melbourne. Just looking at them through the window made my rib cage swell and my spirit soar as I imagined Deborah Cheetham giving voice in Woven Song to the Embassy tapestries.