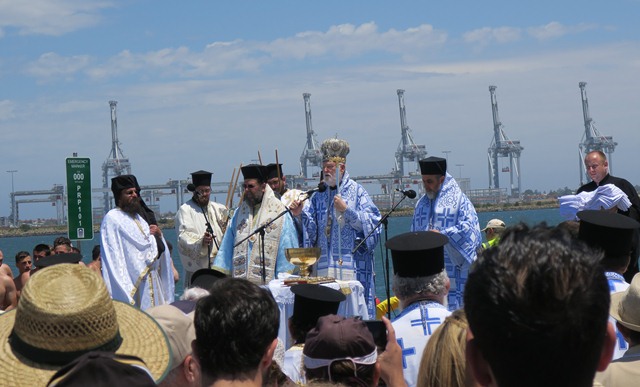 When white tents appear on Princes Pier in early January they signal that the Christmas-New Year lull is over and the cycle of the year’s calendar begins again,

They announce Theofania – the Blessing of the Waters – a tradition that has been observed by the Greek Orthodox community at Port Melbourne’s piers for 33 years.

Gosford has Father Rod Bower. Port Melbourne has Father Noel Whale. He uses the blackboard outside Holy Trinity in Bay St to let people know where we’re up to in the Christian calendar and who to pray for.

He explained the two different Christian traditions celebrated on that first Sunday in January when I passed by  – the Epiphany when those three wise men ‘saw the young child with Mary his mother, and fell down, and worshipped him’1 and all that flowed from that moment, and the Baptism of Christ in the River Jordan marked in the Greek Orthodox tradition as Theofania.

Epiphany – from the Greek meaning manifestation – such a grand word made mundane through every day use.

Saturday 7th reached 37o. The thick concrete deck on Princes Pier had soaked up all that heat and was giving it back on Sunday. A fortunate cool change dropped the temperature by five degrees in as many minutes making it more comfortable for the hundreds of observers.

Upon release, the doves of peace made a quick getaway towards Beacon Cove before arcing out into the Bay. The cross was cast into the Bay and retrieved – all out of sight (to me) because of the large crowds. From a distance, the assembled priests looked like those wise men of yore and the cranes their awkward steeds.

While the tradition has been repeated for 33 years, all around the context has changed.

The cranes at Webb Dock provided the backdrop to the west and the cruise ship Emerald Princess to the east. Station Pier, the arrival point for so many Greek migrants to Melbourne in the post-war period, has become a rallying bipartisan symbol for politicians affirming the values of diversity and multiculturalism. The contrast between the luxury of the Emerald Princess with the austerity of ships like the Patris which made 91 voyages to Australia between 1959 and 1975 would have been starkly present in the minds of many people.

For a time, Port Melbourne had such a large Greek population that schools offered Greek as a second language. But by 2011, Greek speaking people were only the fifth largest cohort in Port Melbourne. English, Australian, Irish and Scottish communities made up the first four. Port Melbourne is now less diverse in every way.

The evidence of this wave of Greek migration in Port Melbourne is disappearing. The houses they built (which replaced older houses still) are sought after for redevelopment when they come up for sale since they are not encumbered with heritage controls.

With the stormwaters of 29 December having rendered the beaches of Port Melbourne unswimmable, blessing the murky waters seemed like a really good thing to do.

In diverse multicultural Melbourne, there are many more New Years to come.

“And when they were come into the house, they saw the young child with Mary his mother, and fell down, and worshipped him: and when they had opened their treasures, they presented unto him gifts; gold, and frankincense, and myrrh.
[12] And being warned of God in a dream that they should not return to Herod, they departed into their own country another way.” http://www.earlychristianwritings.com/text/matthew-kjv.html