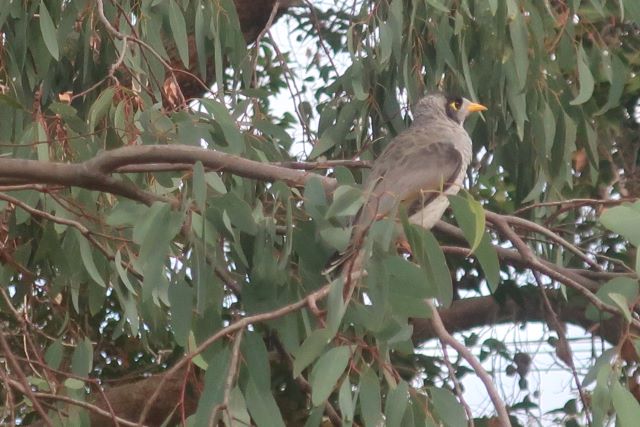 Not cats. Not dogs or foxes. Noisy miners are second only to habitat loss and fragmentation as the greatest threat to small birds.

A workshop on Noisy Miners on 30 March reinforced the dire threat to small birds posed by these sociable and highly adaptable birds. Noisy miners (Manorina melanocephala) are a native honeyeater, not to be confused with the Indian mynah. They are extremely cooperative breeders with birds from one nest assisting those in another to rear their young.

Noisy miners act cooperatively to attack, chase and, where possible, expel small birds. These intelligent birds will chase anything that moves. Noisy miners have even been observed attacking an empty drink can and shaking a sugar straw until it spilled its contents.

Naturalist Gio Fitzpatrick read out an account of the small birds that were found at George Reserve in Bayside as recently as 1994.

“George Street Reserve has an interesting and varied bird population. Resident birds include White-browed Scrubwrens, Brown Thornbills and many nesting Spotted Pardalotes but the outstanding feature is the presence throughout the year of Yellow Robins. … In this reserve the number and variety of birds increases greatly in autumn and winter with the advent of Golden Whistlers, Grey Shrike thrushes and Eastern Spinebills. The latter fed on the correa. In spring the Shining Bronze-Cuckoo may pass through, while the Pink Robin and Fuscious Honeyeater are rare winter visitors. Both the Laughing Kookaburra and Barn Owl were recorded in 1994.”

None of these birds are found today at George Street Reserve. The birds are locally extinct in Bayside. Noisy miners have driven the small birds away.

The dominance of the Noisy miner is attributed to the way we have planted and managed our urban landscapes. Since the late 1980s there has been a preference for planting flowering nectar rich eucalypts which has favoured bigger birds. Gardeners have also been encouraged to plant nectar rich plants to attract birds. All year round there is an abundant supply of nectar – like having McDonalds available 24/7. And Noisy miners also don’t only rely on nectar – they are also bark pullers and feed on the ground.

The ‘lollypop ‘ type of park where smooth trunked eucalyptus trees sit in a neatly mowed lawn is strongly associated with the presence of Noisy miners. From above, and in concert, they command the territory.

Culling is not a readily available option, nor is it universally successful when undertaken. All native wildlife is protected in Victoria. Permits can be obtained for culling, but not at all easily, and only when all other possible measures have been taken. Unless the vegetation structure in the area is modified and appropriate management practiced, the birds are likely to move in from another park or reserve near by.

Gio has been visiting places in Melbourne where small birds thrive to better understand the vegetation arrangements that suit them. Trin Warren Tam-boore in Royal Park is such a place. This constructed five hectare wetland, which collects and cleanses urban stormwater, in now a birding hotspot with 153 species observed to date. The key to the success of small birds is the impenetrable Tangled lignum which surrounds the waterbody – even though it is adjacent to a ‘lollypop’ park. Small birds don’t necessarily have a preference for such places. In the absence of Noisy miners they occupy taller shrubs and plants.

The implications for biodiversity are even more serious than the loss of small birds. Small insectivorous birds help to keep trees healthy by feeding on the insects that attack them.

With growing concern about global warming and associated heat island effect, the trend in urban forestry is towards planting trees that are adapted to hotter climates. However, Gio is impassioned about the value of planting locally indigenous trees: Sheoaks and wattles which have co-evolved with a range of other species. He pointed to Jawbone Reserve in Williamstown. Although it has expansive areas of open grass, the only trees are Sheoaks and stands of Tangled lignum. There are no Noisy miners present.

The plight of small birds in urban areas is so dire, according to Gio, that he regards planting wattles, especially Acacia dealbata (Silver wattle) and Acacia mearnsii (Black wattle) as emergency first aid for biodiversity.

We have been too inclined, he says, to treat trees as ornaments in the landscape rather than as actors in the ecology of places, and our gardens as entirely separate from the environment in which they’re located.

Noisy miners are listed as a Key Threatening Process under the Environmental Protection and Biodiversity Conservation Act 1999), and separately in the states of New South Wales (Threatened Species Conservation Act 1995) and Victoria (Flora and Fauna Guarantee Act 1988).