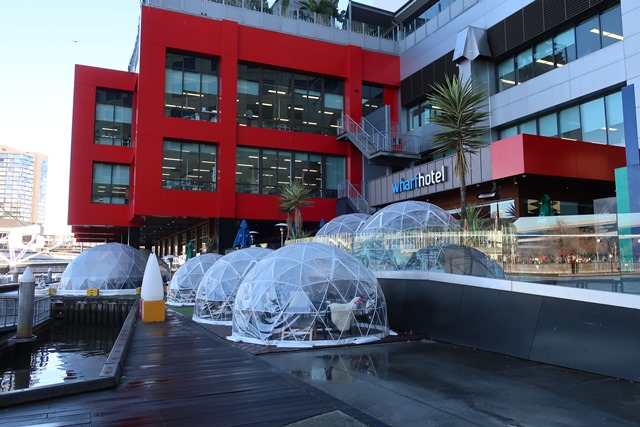 It’s dreary on the shaded north bank of the Yarra River in mid-winter at WTC Wharf.  The fake turf is damp.

It contrasts with a sunny day in March 1983 when delegates from around the world sat beneath the fluttering flags of many nations. They were assembled for the opening of Melbourne’s World Trade Centre.

Guy F Tozzoli was the driver behind the World Trade Centre project in New York. The twin towers were dedicated in 1973, and destroyed in the terrorist attack of September 11, 2001.  Tozzoli became a dedicated advocate for the formation of World Trade Centres as vehicles for promoting world trade.  He remained President of the World Trade Centers Association until 2011. So passionate was Tozzoli about promoting peace through trade that he was nominated several times for the Nobel Peace Prize.

Three factors influenced the choice of this site for Melbourne’s World Trade Centre. The opening of Swanson Dock in 1969 showed that the future was in container, rather than conventional, shipping. The opening of the Charles Grimes Bridge in 1978 cut off access to the River wharves to the north. Redundant Port land was now available for other purposes. Also in 1978 a significant piece of legislation was passed that marked a new era for the Port. The name of the governing entity for the Port was changed from the Melbourne Harbour Trust to the Port of Melbourne Authority to bring it into line with other ports around the world. The legislation also gave the Port enabling powers to a build a World Trade Centre.

The World Trade Centre would express the optimism of this period and the promise of international cooperation through trade. 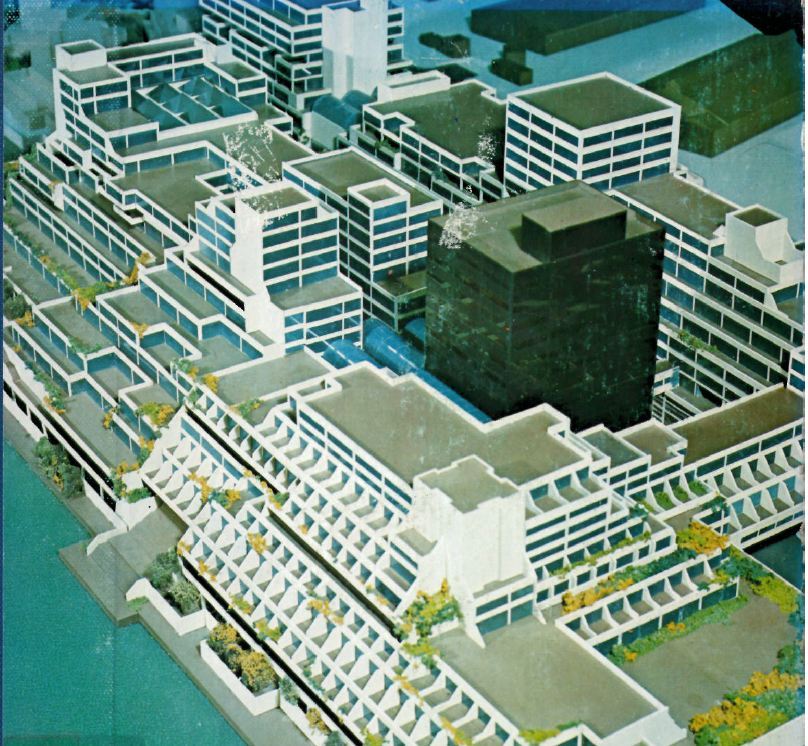 Architect Grahame Shaw’s design was chosen for the new Centre. He had previously been in a practice with Bill Corker and John Denton, who were later (with Barrie Marshall) to design the Melbourne Exhibition Centre directly opposite. The WTC featured extensive exhibition spaces as well as  offices. The Port of Melbourne Authority was also to be housed in the new building.

Premier Dick Hamer drove the first pile of the development in 1978. He was at pains to stress that while the government was right behind the Port and the concept of the World Trade Centre, it would be entirely funded by the Port, and would place no impost on the taxpayer.

The Centre opened several years later with a new Labor government in office.

As built, it was less ambitious than the scheme first put forward by Shaw.  He died aged 57, in 1985, not long after the World Trade Centre opened.

The building does not appear, at least from a cursory internet exploration, to have found its way into the hearts of Melburnians.

The World Trade Centre was sold in 1996 and the Port itself moved to unbranded offices in the City. WTC Wharf is now occupied by a range of tenants including a hotel, Victoria Police, Thales and the Australian Energy Market Operator.

WTC was sold in 2017 by Abacus Property Group, Riverlee and global private equity firm KKR to private interests for $267.5 million.

A 2010 refurbishment which included painting part of the building red has compromised its integrity. The strength of the Brutalist structure is now crowded by surrounding development.

In an attempt to enliven the river bank and to create a sense of warmth and intimacy, mini and mega igloos are available for hire.

Regrettably overshadowing of the River will be exacerbated by the recent approval of Flinders Bank on Spencer St. Residential development and hotels are now favoured on the River.