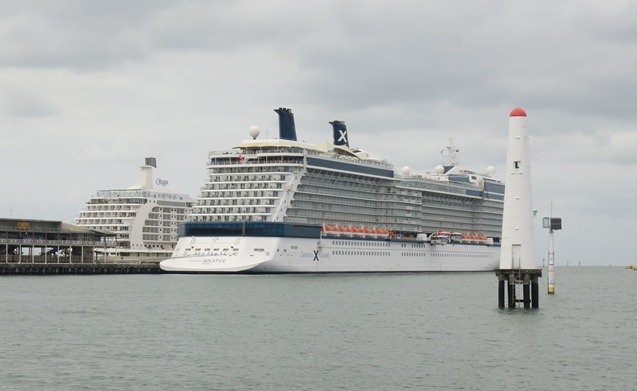 Not fit for luxury consumption

“A pretty unattractive arrival point” with significant limitations1 was how Lord Mayor Robert Doyle described Station Pier recently. He suggested that it would be preferable to have an island cruise terminal in the Bay with passengers ferried into Docklands rather than “lobbed in the middle of nowhere”.

There was no outrage in response to these remarks, no spirited defense of Port Melbourne, and no letters to the paper since there are no local papers. It hardly attracted a murmur on social media.

Was it that nobody cared about what he said, that it was New Year’s Eve, or that people agreed with him?

The perceived shortcomings of Port Melbourne as a place of arrival for visitors has a long history.

Dignitaries, often but not always royal, were taken to St Kilda to make their way to Melbourne via St Kilda Road rather than arrive at ‘drab and shabby’2 Port Melbourne.

After many years of lobbying to improve the entry at Port Melbourne, Centenary Bridge was built in 1934 as part of the centenary celebrations for the founding of Melbourne. Centenary Bridge spanned Station and Princes Pier and allowed for trains to pass underneath it to meet the ships.

The mark of success! In October 1934, Prince Henry disembarked from the Sussex at Princes Pier – although he was then driven to St Kilda and on to the City.

In the early days of Melbourne, coming to look at ships was one of the biggest entertainments in town. When the Great White Fleet visited Melbourne in 1908 the Standard reported:

“Last Saturday was no doubt one of the greatest days in the history of Port Melbourne, and proved once again that whatever the desire of those in high places to treat this town with contempt, the general public recognise that it is a favourite place of resort, when anything of interest in the maritime world stirs the great heart of the people.3

The last ship called at Princes Pier in 1986. The Bicentenary in 1988 was the swansong for the piers. Following the collapse of the Sandridge City Development Corporation plans for Bayside, a planning forum held in 1992 agreed that the presence of shipping was what made Port Port. Shipping should be a priority in any new development. The TT Lines was secured as that shipping anchor for the Beacon Cove precinct.

Cruise shipping was not a ‘thing’ then.

The final plans for Beacon Cove involved the demolition of that signature bridge in 1991. The area now known as Waterfront Place was re-configured to accommodate the TT lines carpark and large restaurants were opened with a degree of optimism that has not been borne out by their subsequent performance.

The fire scarred remains of 1-11 Waterfront Place, once the centrepiece and entry point to Mirvac’s Beacon Cove, are a blight on the area – everyone agrees. Waterfront Place operates with logistical efficiency on cruise ship days but the public spaces are fragmented, and the overall experience of the space unsatisfactory. Congested one day, deserted the next.

Celebrating the history of the Piers has been put forward in every consultation for over two decades. It’s surprising how much interest people take in this random collection of historical photos displayed on the TT Lines fence. Even more surprisingly they have not been tagged since they went up early in 2016. Perhaps people have a respect for and interest in history after all?

The City of Port Phillip is building on recent planning and the opportunity presented by several planning applications in the area (at 01 Beach Street – 103 Beach Street – 1-7 Waterfront Place) to develop public realm guidelines, and they invite your contribution.

If you are an occasional or regular visitor to the area, please respond to the online survey or take up the other opportunities for involvement.

Read more about the history of Centenary Bridge, at ‘Anger at City Gateway Eyesore’