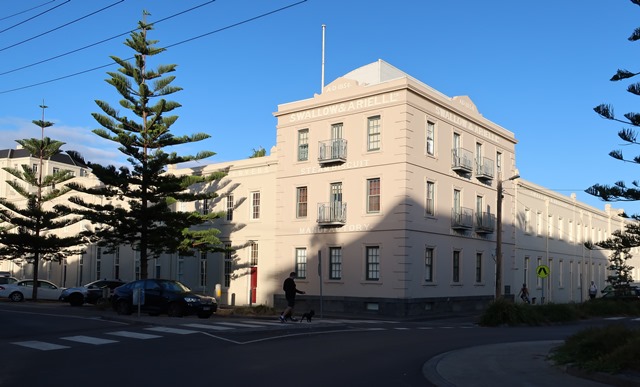 We continue where we left off last week, at Swallow & Ariell in Port Melbourne.

When Ariell died, founder Thomas Swallow went into partnership with his son-in-law, Frederick Derham. Like Swallow, Derham was civic minded. He was a councillor and Mayor of Sandridge and went on to represent Port Melbourne in the Legislative Assembly from 1883 until 1892 – the years when the boom turned to bust.

The impressive technology for making the ‘dazzling array of biscuit styles’ was complemented by the factory’s communications technology. Swallow & Ariell was one of the earliest premises to be connected by telephone.

Between 1886 and 1890, Derham was Victoria’s postmaster general – like a Communications Minister – in the Gillies-Deakin Ministry.

Derham introduced the penny post, dropping the price of an adhesive stamp from 2d to 1d. Contrary to some people’s apprehensions, revenue rose rather than fell because of the huge uptake of the service. He also introduced parcel post and country telephone services. In 1889, he put in a pneumatic tube for distributing letters and telegrams between the G.P.O. and the new Stock Exchange building in Melbourne. He embraced the technology of the day.

Derham resigned from the role of postmaster-general in 1890 when Swallow died, citing the pressure of business – though he continued to represent Port Melbourne until 1893. Michael Cannon thinks it was more likely that Derham resigned as his extensive property and financial dealings began to unravel. He had used his role and position, along with other ministers in the government, to borrow heavily and invest in land speculation. He took Swallow & Ariell to the brink of bankruptcy and briefly returned to live in Rouse St, Port Melbourne. Cannon devotes a whole chapter in The Land Boomers (MUP) to Derham, untangling the complex web of his financial affairs.

My first port of call in researching Derham was the entry in the Australian Dictionary of Biography. No reference to land speculation there. A major project is underway by the Australian Dictionary of Biography to revise entries in the light of updated knowledge and a changed understanding of Australian history as well as to increase the representation of indigenous people and of women. Currently only 12% of the ADB’s 13,000 biographical subjects are women.

Port Melbourne households are in the process of being connected to the NBN through Fibre to the Node (FTTN). How apt that men were at work this evening outside Swallow & Ariell, Derham territory, fluent in the complexity of wires and cables in each pit and pillar. The next step is to make the connection between the cabinet node and households using the existing copper phone and internet network .

The Age reported, using figures from an NBN Co results presentation, that the cost of installing fibre-to-the-curb is $3058 per premise compared with $2259 to the node. The NBN roll out is reportedly on time and on budget to be completed by June next year.

Households in Port Melbourne will be connected by April.

Have you been connected yet and what is your experience of the NBN?