Pier comes to life for Theofania 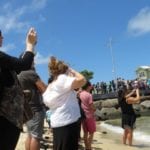 I’ve always wanted to observe Theofania – the annual blessing of the waters.  Holding the celebration on Princes Pier enabled it to be a more public event.

The Pier made a fabulous platform for staging the event. Stacks of plastic chairs made it easy for people to arrange seating to suit.  There was plenty of shade shelter. The Pier’s capacity to host such a large crowd so easily is a reminder of just how big it is.

There’s really only one way to get to Princes Pier – and that’s to walk. People streamed towards the Pier from every approach giving a sense of mild pilgrimage. Many family groups included grandparents, parents and grandchildren. Crowds lined the Pier and beach for that moment when the young men would dive from the boat to retrieve the cross. The service and the solemn singing could be heard clearly from every observing place.

There was quite a patient wait for the moment.  I heard a woman say that the cross used to sink, whereas now it floats. Life Savers were strongly present on the water.  It was over almost as soon as it had begun in a brief flurry in the water with the cross retrieved. 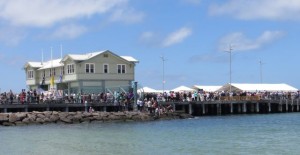 Afterwards Greek food and hospitality were offered on the grand scale. And there was dancing.

At the place where he first arrived in Australia in 1964, the Minister for Energy and Resources, Multicultural Affairs and Citizenship,  Nicholas Kotsiris announced that he would not be contesting the 2014 state election. He supports Matthew Guy to contest  the lower house seat of Bulleen.

The event was a good warm up for the Piers Festival – coming to Princes Pier on Saturday 25 January.

Theofania show that the Pier is well suited to temporary activation for events that relate to its history. Expressions of interest for the use of the gatehouse at Princes Pier closed in October 2013.

What’s next for Princes Pier?