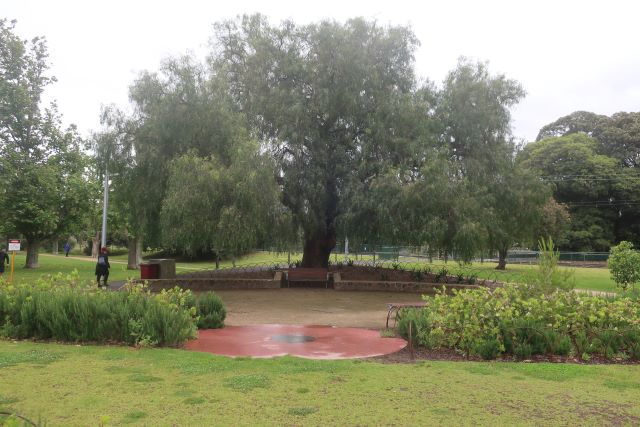 Out of lockdown, I return for coffee to the Station St Trading Company, surrounded by salvias, foxgloves and hollyhocks planted by urban gardener Sandi Pullman.

Opposite the cafe, a Remembrance Garden was created in 2018 in Port Melbourne’s Railway Reserves. It was once a car park. The Garden is a comfortable scale with a slight sense of enclosure created by flower beds of rosemary, poppies and cream callistemons. Symbolic trees anchor the beds – an elm and a pine – the wattle, for some reason, has yet to be planted. The low stone walls make comfortable places to sit, and on a hot day the bench under the Peppercorn tree is especially prized.

It will definitely be a place people remember from successive Covid lockdowns. Unable to sit inside the cafe, people enjoyed their coffee on the comfortable low stone walls. People were open for a chat, they had time for a chat during lockdown, a regular tells me. New connections were formed.

As well timed as the roses for Cup Day, the poppies appear in November. The design of the Garden is disarmingly simple. It can readily be set up for a formal commemoration service. Use will reinforce the purpose over time.

The Remembrance Garden is not a once a year memorial place. It is an every day of the year space accumulating layers of memory and experience.

Meanwhile, on a wind swept Princes Pier, a group of people assembled on Remembrance Day to honour the life of Allan Whittaker. When he enlisted, Allan Whittaker was 11 stone 2 lbs (around 71 kg) and was 5 ft 7 in. He was shot on the first day of the Gallipoli landing and invalided out.

On his return to Australia, he walked with a limp. He found work on the waterfront. Whittaker was shot by police on 2 November at Hogans Flat – the area now near the entrance to Princes Pier – in the bitter waterfront dispute of 1928. Examined when he was admitted to hospital, he was found to be malnourished with rotten teeth that reflected his poverty and poor diet. He died from those wounds in January 1929.

Princes Pier is a bland, generic sort of name. Few people would know which prince it refers to. At first, the Pier was simply called new railway pier, the second railway pier at Port Melbourne – not even graced with capital letters in the papers of the day. It was re-named Princes Pier following the visit to Melbourne in 1920 of the Prince of Wales, briefly King Edward VIII and later the Duke of Windsor. He came to thank Australians for their support of Britain during the war.

The Prince of Wales association with the pier was brief. The carefully planned celebrations were delayed when dense fog enveloped the Renown outside the Heads. A flotilla of destroyers was sent to help but it took them a while to locate the fog bound ship. Finally, the Anzac picked up the Prince and conveyed him at speed to the Port Melbourne pier. His feet barely touched the pier before he was whisked away on the Hygeia to St Kilda where the real proceedings began. The Prince’s visit was enormously popular and huge crowds turned out to see him wherever he went.

In August this year, Andrew Lownie published The Traitor King: the Duke and Duchess of York in Exile. The book relies on previously unexamined archival sources from France, Spain and the Bahamas where the Duke and Duchess spent time during and after the War. He finds that the Duke was not just a Nazi sympathiser but actively supported Hitler and was open to the idea of becoming a puppet king should the Nazis successfully invade Britain. He was regarded, even by his own family, as a security risk. Lownie challenges the myth of the great love story that has surrounded the couple as a largely fabricated story. They were selfish, self absorbed people living at others expense.

Noel Turnbull, an organiser of the Whittaker commemoration, has long argued for the name of Princes Pier to be changed. In the light of this further information about the Prince, later the Duke of Windsor, further interpretation on the layered history of Princes Pier is definitely warranted.

With the automated cranes of the Victorian International Container Terminal in the background, former Maritime Union of Australia official Kevin Bracken reminded the gathering that it was the drastic erosion of working conditions that had brought about the confrontation on Princes Pier in which Whittaker was shot in 1928.

Andrew Lownie The Traitor King; the Duke and Duchess of Windsor in Exile (August 2021)