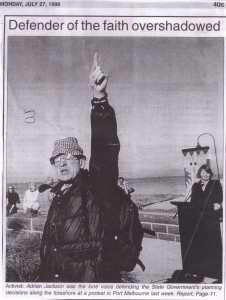 Planning was a hot issue in Port Melbourne at that election.

In 1998 the Liberal Government released ‘Gateway to the Bay’, a strategy which imagined Port Melbourne and St Kilda as nodes of high rise development in a triangle with the CBD. Concurrently, development applications were sprouting at the southern end of Bay Street. There were no planning controls in place at that time to manage and shape the intense wave of development pressure.  Bianca (formerly conceived as the Muir)  and Bayview had submitted applications for 20 storeys and more.

Debates over-shadowing of the public realm were thrashed out at Panel hearings on the planning controls in 1999. There was a view around at that time that people did not use the beach in winter and therefore overshadowing was not a major concern.

Residents for Responsible Development had their fingers in the dike of development pressure and joined hands with seasoned planning activists from St Kilda to fight for a different future for these seaside suburbs.

On taking office, John Thwaites assumed the Health and Planning portfolios  – two contentious issues in the Victorian community at that time.  One of his first decisions was to enable height controls along the foreshore in Port Melbourne and the adoption of a suite of planning controls to guide its future development. He also committed to developing clear guidelines for the use of ministerial discretion when applications were called in.

Many people today remark on the scale and coherence of development along Port Melbourne’s foreshore. That is the result of those planning controls. The down side is that they have contributed to Port Melbourne’s un-affordability.

At that time, as now, there was great debate about the relative merits of preferred  vs prescriptive height controls.  Planners and architects tend to prefer discretionary controls, whereas community members often prefer the certainty that mandatory controls bring.  At a recent Melbourne Conversation, Rob Moore from the City of Melbourne argued that exceeding height controls should only be contemplated where there is clear public benefit such as, but not limited to, affordable housing or the creation of open space. The lack of certainty around planning at present is fuelling wild speculation with land sold and re-sold and each applicant coming back for more. The discussion about height controls was entered into with vigour in this forum hosted by Urban Melbourne.

Minister for Planning, Matthew Guy, as widely discussed in the media, has supported many super tall buildings. There are twenty three towers beyond 200 metres either proposed or under construction. ‘Height’ and ‘controls’ have de-coupled while he has been Minister. The lack of constraint, or restraint, on the Minister for Planning’s power is deeply troubling.

Arrogance seems to be a common theme in the unseating of governments. It undid Kennett and was Brumby’s downfall. Watch out Matthew Guy!

Watch the Melbourne Conversations: Urban Heritage/New Architecture: Where to now? on youtube

The spacious streets of Port