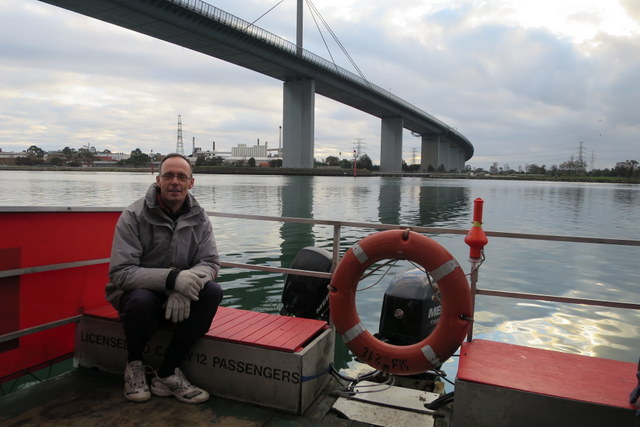 When picking up rubbish on the banks of the Yarra, I chat with Michael Guthrie, one of the skippers of the Punt.

I asked him why he had decided to go plastic free in his life – not just in July.

The decision started overseas – literally over the seas.

I ran aground in rubbish and barnacles in the middle of the Pacific Ocean between Hawaii and San Fran. I went and investigated, thinking the rubbish would part. It didn’t. It might have been a kilometre deep.

The boat just stopped. And it’s a 48 tonne vessel.

When you run aground you start to think.

When I traveled in Vietnam and Cambodia I realised there’s actually no rubbish bins. People just throw it in the river to get rid of it. I was living in the Himalayas and they waited until the monsoonal rain came and they just tipped the rubbish into the creek.

I came back to Australia and realised I’m part of the problem. I want to become part of the solution.

I learned that Australia has 2nd most rubbish per capita – 650kg per year per person of rubbish. America is the highest.

And I thought wow – that’s a lot of rubbish!

The difference between us and places like South East Asian countries is that we have trucks that take it out of our sight so we feel good about that.

How did this go about influencing your behaviour?

I saw that and I felt it was wrong.  I got sick of plastics cutting my engines in various boats. They’d get into your water intake and you’d have to shut off your engine to clear the problem.

And then I started researching it a bit more and found out about the chemicals that are in plastic, how it breaks down, and how we get rid of plastic.

I realise we can’t get rid of plastic.

It breaks down to smaller than the eye can see and the plankton eat it. We put it in the rubbish dump but then we have aquifers under the earth which take it eventually to the ocean.

We’re taking chemicals out of plastic and putting them into our food.

It doesn’t make sense to me.

I look at a  lot of what you buy in a shop  – a lot of it is covered in clingwrap.

Its not on for me any more.

I also want to be healthy and not loaded with chemicals.

I’m walking along this (river) bank and thinking ‘you’ve got to be able to put a value on rubbish especially the plastic.’

Why have plastic? Why not find an alternative?

There are things like that clam shell packaging, I just don’t get why we have to have it.

We’re killing where all the rest of us want to live.

That I struggle with – totally.

How did that lead you to modify your own behaviour?

The first thing I did was I made a decision.

What do I actually need in plastic?  And the answer came up with nothing. I like to have convenience when I go shopping – more convenient products always seem to come in plastic.

So the first thing I did was to find another way of shopping.  There are a few shops that supply food in bulk. I now shop there and take my own jars and containers.

I not only try to go plastic free, I try go packaging free. Why have disposable stuff?Why have single use paper bags?

I’m also living in the world but I’m not contributing to new plastic in my home.

A couple of months ago I realised that I don’t actually need a car and the planet doesn’t need me to need a car, so I sold it.

The definition of need has changed for me.

I went through my thinking processes and came to the conclusion that most people have a default thinking ‘What is the most convenient thing to do right now?’

I came to the conclusion that’s  the wrong way of thinking. Now I think:

‘What is the most ecologically sustainable thing I can do’

And that’s my choice.