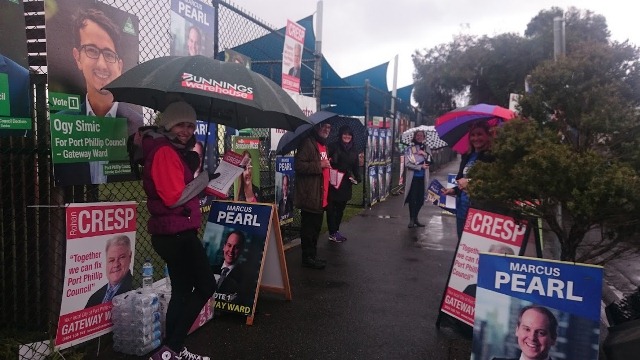 The results have been declared. Bernadene Voss, Marcus Pearl and Ogy Simic will represent the new Gateway ward for the next four years.

Council elections in Port Phillip and around Victoria were held on Saturday October 22nd – a day memorable for the bitter cold and rain squalls rolling in from the Bay. No sausage sizzles, no coffee carts –  just soggy leaflets, ruined umbrellas and a sense of cameradie from mutual experience of the conditions.

Candidates hand out ‘how to votes’ on Nott St Port Melbourne

Port Phillip was one of six councils (out of 79) to have attendance voting. The Council made this decision in February 2016 against the advice of Council officers who recommended in favour of postal voting [1].

Port Phillip’s low voter turnout has been an argument for postal voting but its voter participation has been remarkably consistent over the last three elections – 49.47% in the most recent 2012 election. This is owing to the high number of renters in the City  (50% at the 2011 census) and the large number of non-residents and company nominees on the CEO roll.

Many people took advantage of the month long pre-poll period to vote early and conveniently. Candidates and their volunteer supporters got to know each other over this cold and windy period and most importantly, voters got to speak with the candidates.

Many voters were perplexed by the new ward structures and how the new arrangements had been decided. But above all, voters were looking for the candidates who were genuine. Voters were discerning. They didn’t go for the grand gesture of a pool on the foreshore, and appeals to law and order did not appear to gain much traction. Pitches were both grand – the pool on the foreshore – and micro ‘Garbage contractor to leave bins upright with the lid closed after emptying’ – no doubt a priority gleaned from doorknocking.

The election was fought with tools old and new and with a level of sophistication not previously seen in local government elections. Rosettes and trucks made a quaint comeback, while doorknocking endures. Most candidates had their own websites and used facebook extensively in campaigning. The Greens also used automated phone calls. All this is expensive.

“What we can already see is that the new ward system has tilted the playing field against traditional community-based candidature.  Wards now too big to effectively doorknock, printing runs too costly, and the wrangling of sufficient volunteers for letterboxing / handing-out now extremely demanding for most local groups to sustain.  Local-issues candidates have been stretched beyond their local communities —  more generally recognisable political branding will enjoy a wider reach.” 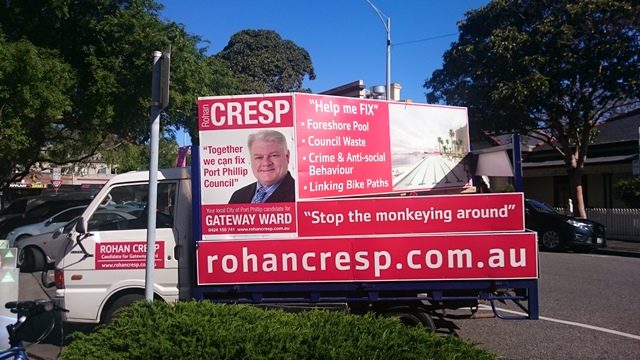 Rohan Cresp used old school methods, mounting billboards on the back of a truck. Outside the Port Town Hall

Other bits and pieces

Some regard attendance voting as quaint, or a dinosaur in a modern democracy, but it definitely helps with the ‘fair dinkum’ test. With 95 candidates in Wyndham, and 84 in Casey, elections are subject to unpredictable preference flows. There is a lot to be said for the investment of time and energy in attendance elections and the civility with which they were conducted in Port Phillip. 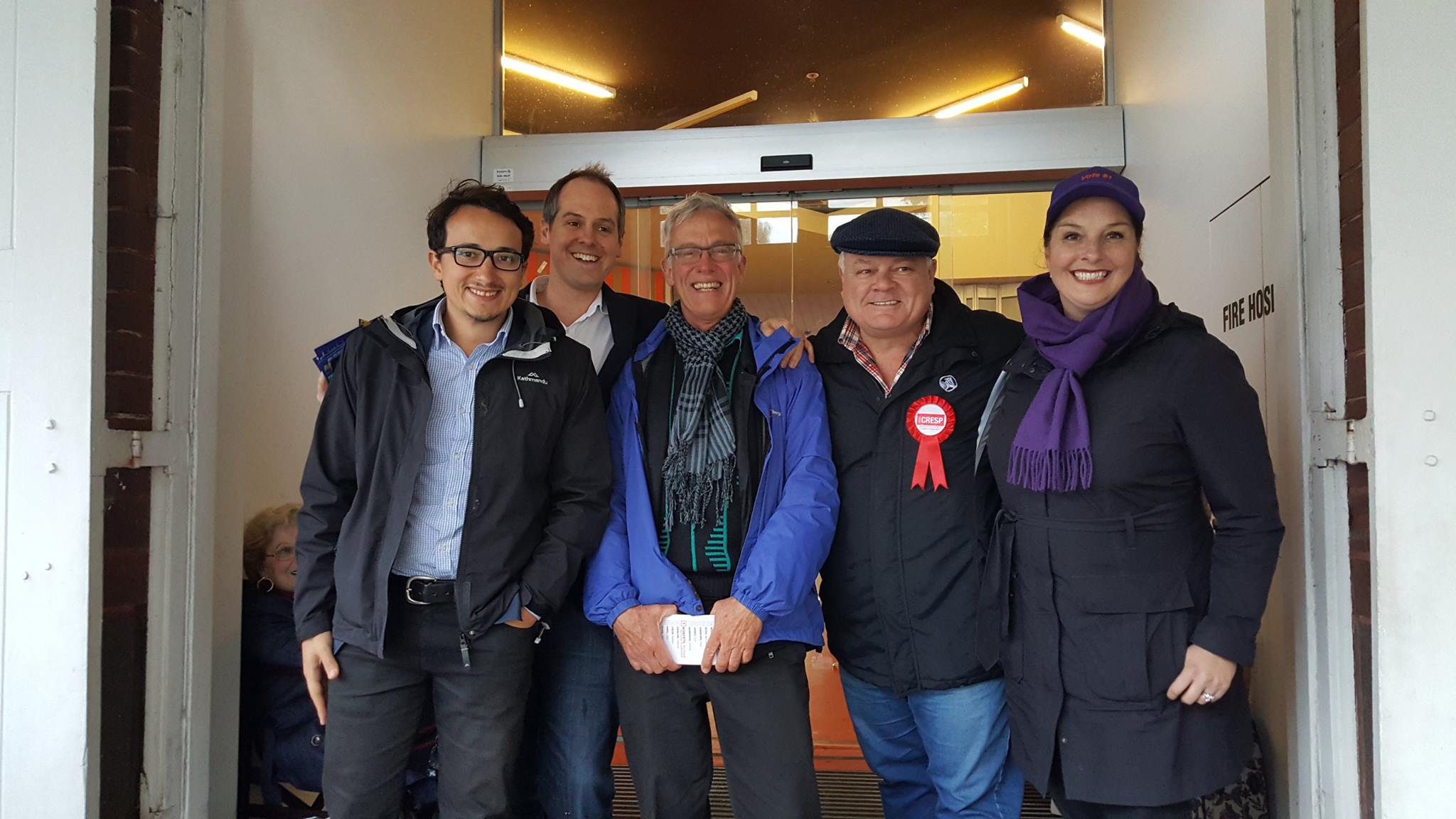 Mainstream media was slow to follow the results of the local government elections. Stephen Mayne, who was not re-elected to the City of Melbourne, covered the election across the state single-handedly and comprehensively from a basis of deep knowledge of the sector and an ongoing commitment to transparency.

The 2016 election in Port Phillip was a decent example of local democracy at work. Unsuccessful former Councillor Touzeau saw her defeat in that spirit, so the last words go to her:

“Democracy is a gift – hard earned over centuries – and despite the amount of work involved one thing is clear and that is the fragility of democracy and the need to build a civic culture to underpin it for the future. We live in a beautiful place with a huge legacy from our forebears. We have a responsibility to care for it, and that inspires my community commitment. We need to be careful that the throw away culture that is entrenching itself in contemporary society does not end up throwing away our society itself.”

The Mayne Report: Full call of the card for Vic Council elections