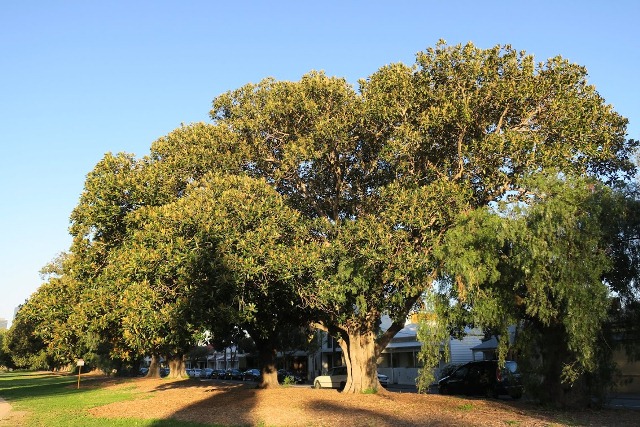 There is an energetic interest in cities across the world in growing the urban forest – the collection of all the trees and vegetation in a city – for biodiversity, air quality, beauty, stormwater management and urban cooling.

Ian Lunt has written a series on urban trees. He concludes that while more trees are being planted in Australian cities, they tend to be smaller and are replaced more often. There are fewer big trees.

Being sandy and swampy, large trees were not part of Port Melbourne’s original nature.  In the early years, Port Melbourne was notably devoid of trees and other vegetation.

By the end of the 19th century, the avenue of Moreton Bay figs had been planted in the Railway Reserves. They continue to grow in stature and are some of Port Melbourne’s most magnificent trees.

Many trees have been lost in the accelerated densification of the suburb. The few very large trees in Port on private land have not fared well.  The felling of the large fig tree outside the Holy Trinity Church Hall in Bay St for a development that was never built is still bitterly remembered even though its timber was made into benches that are in the Port Melbourne library.

This puts the pressure on the Council to add to the urban forest in the footpath, the median strips and the parks. But not everyone shares the love of trees. Many people actively resist having trees on ‘their’ footpath. The needles of trees fall onto the car, the autumn leaves pile up, the gum nuts are slippery, the tree roots create trip hazards.

Better protections are now in place for trees caught up in development applications. There are means of calculating the amenity value of trees and charging those to developers when a tree is removed, as well as stronger requirements for the protection of trees during construction.

The City of Port Phillip’s tree strategy looks for opportunities to plant large signature trees but this also has challenges. Some trees are vandalised soon after being planted, and others don’t make it through the hot dry summers.  The desire for bay views leads to active campaigning against trees and tree poisoning. The formal requirement to keep trees clear of electric lines in areas of Council responsibility under the Electrical Safety Amendment (Bushfire Mitigation) Act 2014 results in savage pruning. 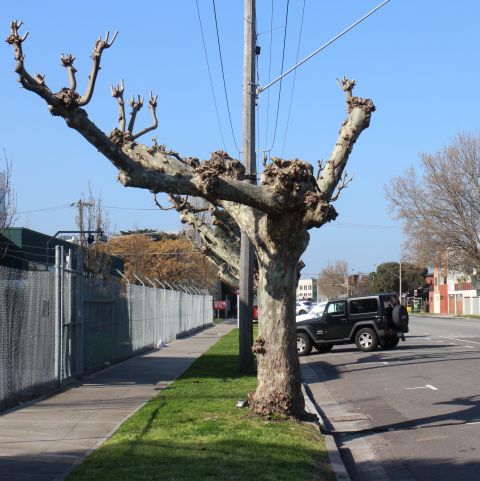 For many years in Port, old trees in Reserves were taken for granted. That’s changed.  The recent upgrade of  Morris Reserve, Port Melbourne has given a tired looking elm tree a new lease of life by creating a generous permeable planted bed around it. These actions have transformed it from an everyday kind of tree to a signature tree that gives definition to the small park.

The Fishermans Bend Urban Renewal Area offers an exceptional opportunity to create wonderful treed streetscapes – will it be taken?