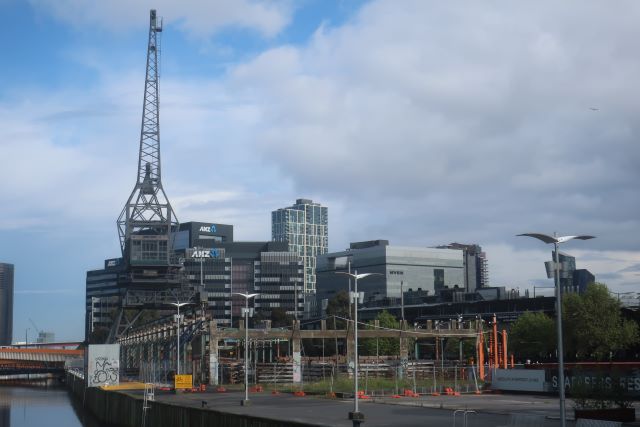 On 1 September 2019 I joined other Melburnians to gather tulips on the river bank at North Wharf behind the Mission to Seafarers. It was an act of generosity imagined by Joost Bakker.

We were invited to help ourselves to tulips, no limit. It was tulip fever. It was the last crop of tulips harvested from Joost’s brother’s farm as he could no longer compete with cheap flower imports. The initiative was supported by Riverlee, developers of Seafarers, the site between the Mission to Seafarers and Charles Grimes Bridge. Riverlee has already restored the wharf (as you can see in the photograph) and the Malcolm Moore crane, part of their contribution to conserving the heritage of the site. Shed No 5 is also to be restored. Since this photograph was taken, it has been carefully dismantled and safely stowed off site.

When the tulips I had gathered finished flowering, I put the bulbs away in the dark of the shed. In 2020 and 2021, I re-planted them and they have flowered all through September, a daily reminder of that gesture of generosity, colour and spring.

As Gerard Manley Hopkins so definitively asserted ‘Nothing is so beautiful as Spring’, and spring has been especially beautiful in Melbourne this year.

But September is also a time of sorrowful anniversaries – September 11 – now also associated with the painful withdrawal from Afghanistan. Receiving less attention is the 6th September anniversary of the massacre at Ave Maria Church in Suai in East Timor in 1999 where 200 people who had sought refuge after the independence ballot were massacred by pro-Indonesian militia. That massacre was the genesis of the City of Port Phillip extending a hand of friendship to that traumatised community. Once in St Kilda on that anniversary, I heard Balthasazar Kehi sing a ritual mourning song for that tragic day which comes back to me every 6th September.

Last week the insistent hovering noise of helicopters above Port Melbourne alerted people to the closeness of anti-lock down, anti-vaccination protests. This was the scene at the corner of Plummer and Prohasky Streets outside the newly completed P.M. development where groups of men made their way towards and away from the protest while motorists attempted to access the Westgate Bridge.

The crowd marched onto the Westgate Bridge, usually a complete no-go area for anyone on foot. Last year the Bridge was heavily fortified at ground level with concrete blocks, razor wire and gravel beds. Instead, the closure of the Bridge came from above – the protestors occupying the Bridge. I felt afraid, not just about the aggression and the riot itself, but the ruptures in our society that they revealed.

On 30 September, Victoria recorded 1,438 cases of COVID 19, with 62 active cases in Port Melbourne, even as people are worn to a thread by the prolonged lockdown.

I think we all might be grieving right now for the life we used to lead, the companionship of friends and family, the ‘closedness’ of so many favourite places, the abandoned central city and climate apprehension.

Will Shed No 5 be re-assembled and the promised Seafarers Park, where tulips so briefly bloomed, be delivered?

The tulips are finishing up now. The petals are falling. A new season is coming.

When a fresh calyx newly blooms, it calls for new songs; and though streaming time flees from us, the seasons come again. Goethe (W H Auden)