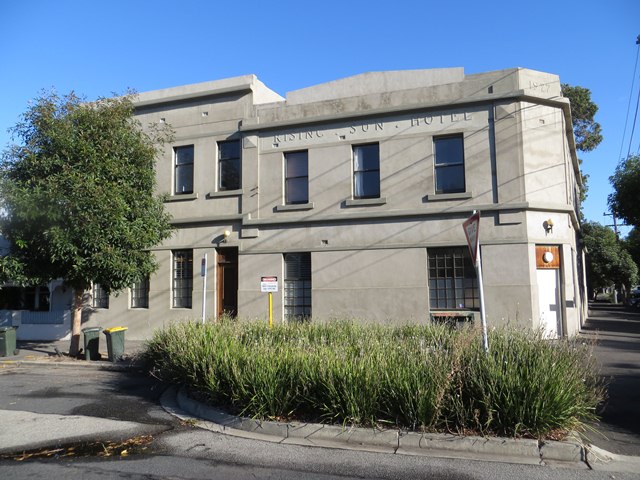 Across inner Melbourne, pubs are disappearing ‘in a building boom unprecedented in its scale and tempo’.1 The illegal demolition of the Corkman in Carlton has catalysed concern about the loss of the heritage embodied in those pubs.

Pubs are secular gathering places and there is a strong sense of community ownership even by people who don’t patronise them.

What’s the picture in Port?

It’s hard to keep track of Port’s pubs over their history, they changed their names and identities so often. Pat Grainger has done just that in her entertaining book Chartered Scoundrels. It’s an urban myth, says Grainger, that Port had a pub on every corner. Not quite. There were fifty four in all. By 1969, there were less than half that number with many hotels closed in response to temperance campaigning leading to the reduction in the number of hotel licenses.

Chartered Scoundrels records how Port’s pubs have come and gone, been re-styled inside and out, and responded to the changing fortunes, attitudes and economic circumstances of the Port community.

Many pubs have completely disappeared such as the All England Eleven and the Fitz-James. Others have taken on a quieter life as residences such as the Army and Navy, the New Great Britain and the Rising Sun.  Almost impossible to imagine wharfies drinking here at the Rising Sun, and Nappie Ollington playing two up under the lights outside the hotel after closing time.

A quiet life for the Rising Sun

In the last thirty years

Topless waitresses were advertised as an attraction at the Station Hotel in 1987 when Fred Cook, Port’s champion goal kicker, owned the Hotel – completely out of step with the mores of 2017.

For a period in the ’90s, the pub on  the corner of Rouse and Bay Streets was the Irish pub Molly Blooms. Rouse Street was closed for St Patrick’s Day. But now it is back to its old new self, the Exchange, and seems to be well patronised.

The heritage citation for the Graham Hotel looks like it’s from a different era – it was – the ’90s. Workers gathered at the Cassidy family hotel on Saturday afternoons and not a woman was to be seen unless it was in the Chinese restaurant. 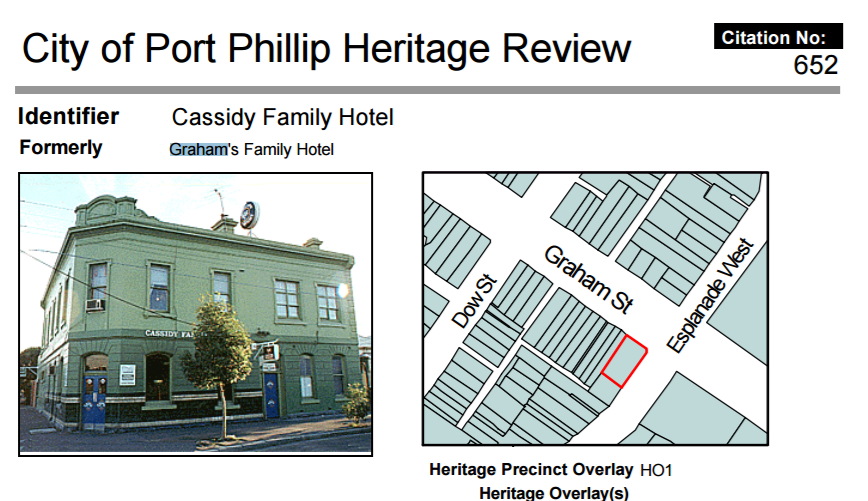 The Graham Hotel – at one time Cassidy’s Family Hotel

This snapshot of Port’s hotels in the early 1990s shows just how much the pub landscape has changed over twenty years.

All change at the London

The London embodies change. According to the report prepared by Context for the City of Port Phillip

“The London Hotel presents as a building of the 1930s, with its Moderne/Art Deco façade, however closer inspection reveals … evidence of its earlier origins. Along both the Beach Street and Princes Street elevations there are arch-headed openings that have been modified with square headed doors and windows.

The London Hotel was originally constructed as a mid-Victorian hotel of substantial proportions, with the front five bays of the building corresponding to the existing structure. A further eight bays along Princes Street have been removed. However, before demolition took place the whole building was rendered and Victorian detail removed from the parapet, the window mouldings, and the rusticated effect at ground level. The curved corner has been retained but the window has been removed and a stepped parapet constructed to accentuate the corner. 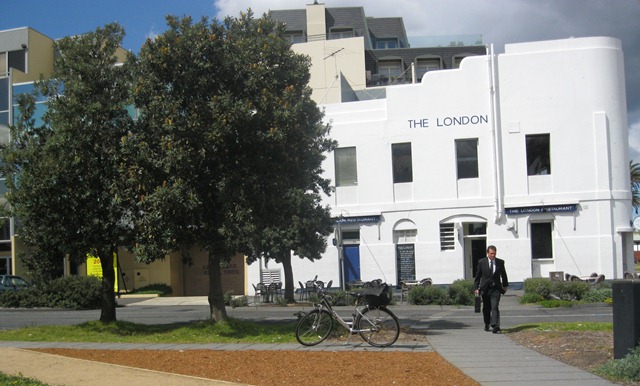 The changes described above are well illustrated in this photograph

It is the way that the London has rolled with the changes in Port Melbourne over time that make it so interesting, yet all the changes have meant that no heritage expert believes that the hotel satisfies the criteria for heritage listing.

“This, milord, is my family’s axe. We have owned it for almost nine hundred years, see. Of course, sometimes it needed a new blade. And sometimes it has required a new handle, new designs on the metalwork, a little refreshing of the ornamentation . . . but is this not the nine hundred-year-old axe of my family? And because it has changed gently over time, it is still a pretty good axe, y’know. Pretty good.”

I like the concept of thinking about heritage as an  ‘assemblage’ – a combination of social and built heritage.

What next for the London?

Alan Davies of the Urbanist argues that it is unrealistic, impossible even, for residents to expect government to intervene to ‘protect an ambience or elusive special quality’ that has come about through the life lived in pubs. Instead he suggests the focus should turn to interpretation – telling the endlessly rich and entertaining stories of the hotels.

Might it be better to have a lively, welcoming new place for locals and visitors on this important corner for Port rather than a compromised heritage facade?

Perhaps like Railway Pier and New Railway Pier, the Great Britain and the New Great Britain, we could have a New London Hotel. Or, if we do have to lose this familiar friend, perhaps there could have a closing party such as this one at the Ship Inn, one of a group of ten hotels closed in 1915 by the License Reduction Board.

“At the Ship Inn, when the hour of closing arrived, a party of men on the balcony, to the strains of a ‘shanty’ hauled up an anchor and swung it over the balustrade in natural style. Thus ‘cleared’ in the imagination of its patrons, ‘The Ship’ deprived of its ‘commission’ to refresh the thirsty, ‘passed out’ into oblivion.” The Argus 01 Jan 1916

Mark Baljak  (28 02 2017) Rise of the microbrewery, fall of the pub and the demise of Melbourne’s historic built form Urban Melbourne