‘By many measures, bicycles are as sweet an invention as humankind has ever known’ (Eric W Sanderson, author of Mannahatta)

Bikes are a big topic. I have waited a while before writing about riding in Manhattan before making some obervations. 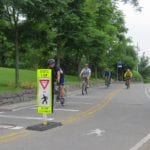 the greenway near Chelsea Piers

The greenways are the most well used of the bike routes. The Hudson River Park Greenway runs the length of Manhattan. It is an efficient, safe and very pleasant ride. Riders can then exit the greenway to go east on the cross streets.

Using best Bicycle Network Victoria Super Tuesday counting technique, we counted 35 cyclists past a point on the greenway at Chelsea Piers in 10 minutes: 32 males and 3 females. 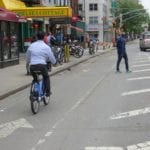 On road bike lanes don’t look so great. Line markings are variable, and as the photo suggests, poorly respected.

Riding in mixed traffic is not for this faint hearted outsider, but many people do, with no helmets, no lights and dark clothing.

The Citibike bike share scheme seems to be well used.

Of course, bicycle helmets are not compulsory but a good number of riders were wearing them.

I read in BikeNYC that ‘Dooring is the most frequent type of collision between vehicles and cyclists in New York City.’ (pvi)

Bike couriers deliver take away – might that work in Port Melbourne?

Bike locks are BIG suggesting that bike theft is a problem.

On the basis of my observations, Melbourne is way ahead in cycling per head of population. Using the level of female ridership as the barometer of the health of cycling, it has a long way to go. 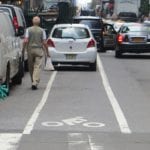 a few challenges on the on-road bike lane

On the other hand, I did not observe the high level of hostility between car drivers and riders that you see in Melbourne.