The best worst aspect of Jason Dowling’s article in The Age ‘Progress means Westgate Bridge must take its toll’ (Oct 14) was the aerial view of the Westgate freeway interchange at Montague St.  Hard to believe its Melbourne.  I experience it on a bike at ground level. Getting from one side of the interchange to the other is quite a journey.

Its especially unfortunate since this is a key link in an otherwise continuous route of separated facilities for cyclists from La Trobe Street, Harbour Esplanade, Port Melbourne Railway Reserves to the Bay Trail.  Being ruthlessly fair, the intersection is not entirely bad for cyclists. Because the pedestrian and cycle crossings are synched for car traffic flow,  there’s plenty of time to cross. But waiting for the lights to change is about as hostile an experience as you can get in inner Melbourne – and several people were too impatient for the ‘long’ wait between signal changes.  Docklands is so near to Port Melbourne and yet so far.  The two places, once connected, are now dis-connected by this extensive roadway. 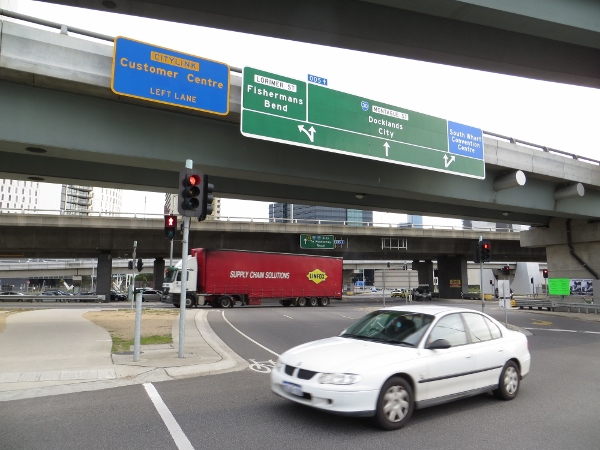 Professor Rob Adams regularly uses this Montague interchange as an example of what not to do in urban planning.  Between the liveable, walkable, sit-able and rideable  is an interchange.

This dictionary definition of running the gauntlet is pretty apt: to race, as a punishment, between parallel lines of men who thrash one as one runs.