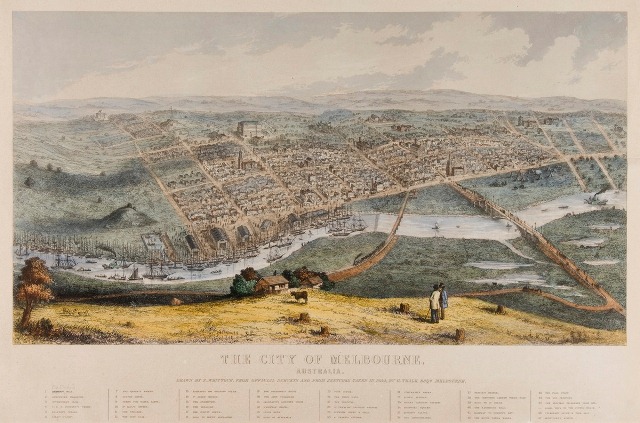 Put yourself in the picture where those two men are standing between two bridges looking across the Yarra River – the Sandridge Bridge to the left and  Princes Bridge to the right. The Hoddle grid is spread out before you – a pattern and a framework set up for the future. The two bridges connect directly into the grid – both still in use today.

‘Everybody knows’, as Leonard Cohen sang, that there are only two major roads into and out of Fishermans Bend –  Lorimer St and Normanby Rd. Both feed in to the complex, loaded Montague intersection. Already residents complain about exiting Yarra’s Edge onto Lorimer St.  An impatient annoyance now but unworkable in a future of 80,000 residents.

Therefore at the very heart of the draft Fishermans Bend framework is a tram bridge across the Yarra. The bridge, and this is important to emphasise since it’s sometimes overlooked, is also for walking and cycling. The tram crossing would be the first step towards opening up Fishermans Bend with heavy rail to follow in the longer term.

You may remember that a tram crossing was proposed in earlier versions of the plan. It bisected Point Park – the small, and only, park in Yarra’s Edge. Local member Martin Foley and Planning Minister Wynne both said that no bridge would be built in that exact location.

The route proposed in the draft Framework plan crosses the River from Collins St, west of the ANZ bank building, in an alignment with Hartley St. Once across the River, the tram would divide to serve a northern route along Turner St and a southern route along Plummer St.

This proposed alignment arose from a detailed investigation and assessment of all the options for a river crossing summarised in the Integrated Transport Plan, one of the background documents to the framework.  Not surprisingly, the tram bridge was the hot button topic at a meeting of Yarra’s Edge residents at a packed meeting at the Library at the Dock on 8 November.

Here are some of the questions put to the Transport for Victoria representative followed by a summary of his responses. The full analysis and recommendations can be found in the Integrated Transport Plan.

Why not a tunnel? asked one

Tunnels aren’t good for walking and riding. Tunnels feel especially unsafe for walkers. Not to mention the expense which would only be warranted for a high capacity train.

Why not a spur line from the 109 at Port Junction? asked another

Those lines are already approaching capacity. A further line would lead to tram congestion in Clarendon St and slower journey times across the tram network. Moreover,  a spur line would not deliver people right into the heart of Fishermans Bend. It would replicate the hub and spoke model where everyone has to go into the city to go out again.

Why a tram? Why not a train?

The draft framework anticipates a future Metro .  That is why alignments for the future metro are reserved in the plan. Any future Metro rail proposal would need to serve wider metropolitan transport needs especially to the west of Melbourne – not just Fishermans Bend. Heavy rail is essential to attracting employment to Fishermans Bend.

Emergency services would access Fishermans Bend via the bridge and need reliable access. Besides, it would undermine the efficiency and effectiveness of  public transport through interruptions (equivalent to level crossings)

Why not put the tram across the Charles Grimes bridge to pass through the Montague intersection?

This option was considered – both at grade, and elevated. While it scored reasonably from a public transport perspective, it was poor for walking and cycling. In addition, the amenity impact of the elevated bridge adjacent to Tower 1 at Yarra’s Edge was considered unacceptable.

When the site that has become Beacon Cove was planned in the late ’90s,  it was explicitly decided to organise the development around the tram stop. That decision has made it possible for many people living in Beacon Cove and Port Melbourne to reduce their car use, not for any ideological reason, but because it was more convenient. The only regret is that it was not built with greater capacity, having only one line.

A well designed bridge and landing could be an asset to Yarra’s Edge.

On Sunday 19 November from 11 to 1.30, there will be a drop-in information session  at the Sandridge Room at North Port Oval or register for the presentation from 1.30 and 3pm. Local member Martin Foley and Planning Minister Wynne will be there.