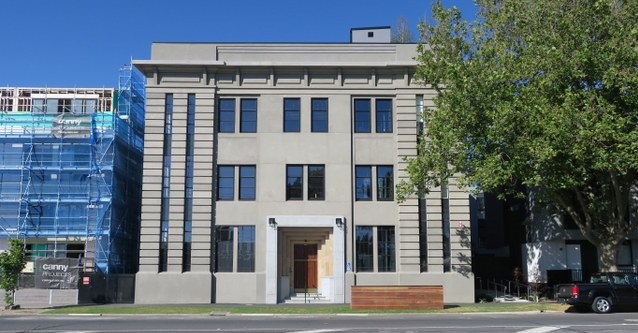 Passing down the Yarra Yarra, we saw thousands of bullocks’ and sheep’s heads lying at the edge of the river a little way from the slaughtering house, rotting in a heap, 1 so wrote Louise Timewell of her first impressions of Melbourne at the time of the gold rush.

By the late 1880s, slaughtermen, butchers, boiling down works, glue manufacturers and an abattoir, all had their trade in Ingles St, Port Melbourne close to the Yarra River.

Pre-eminent among the businesses on Ingles St was the firm of J Kitchen & Sons – candle and soap makers. Kitchens, as it was locally known, began as a small backyard operation relying on butchers’ scraps in Emerald Hill before their noxious trade was moved further away from habitation – to what was then the Sandridge Bend Road. The firm prospered and in 1925, they built administrative headquarters on Ingles St ‘combining loftiness, dignity and stability’. The building was extensively renovated and restored in the TV series The Block.

The smells of heated animal fat were the stuff of Port Melbourne legend. They were said to be worth at least a goal to the home side at neighbouring North Port oval if a north wind was blowing in the 1950s. In recent years more stringent EPA requirements led to a decrease in malodours though they could still be discerned from time to time. Those troubling smells have gone now and are recalled almost wistfully.

Animal fat is no longer a scourge of the Yarra River but it is of the sewerage system. Improperly disposed of down drains, fat combines with (un)flushable wipes and discarded personal hygiene items to create fatbergs that can impede the efficient operation of the system.

Interdisciplinary artist Catherine Sarah Young has harvested sewage from open sewers and pipes in Manila and Medellin and used it to create soaps (sterilising the fat, of course) in a project called the The Sewer Soaperie. Her work was displayed as part of Disposable: Reimagining Waste – a pop up gallery for Science Week at the University of Melbourne. The idea for the work came to her when fatbergs blocking the sewer caused flooding in the streets of Manila.

Would you wash your hands with that? was her provocation.

Being the daughter of a sewage engineer brought up on civic pride in the importance of a well functioning sewerage system, I had no hesitation in accepting the invitation and washing my hands.

Young’s remarks are on point in the light of our present recycling crisis:

“Improper waste disposal is one of the tiny behaviors whose consequences eventually interfere with everyone’s lives, and yet we usually blame other people for it.”

More recent remnants of the former Kitchen & Son complex are making way for The Soap Factory by MUSK Architecture studio. Their thoughtful design response draws on the industrial history of the site, and makes use of much of the existing brick building fabric. It is an antidote to the wall to wall townhouses that cover the rest of the site.

Also in this past week, an important anniversary

On 17th August 1897, the All England Eleven hotel on the corner of Princes and Rouse St, Port Melbourne was the first property to be connected to the newly laid Melbourne sewerage system, a sub-surface engineering marvel which helped to end Melbourne’s reputation as Smellbourne.

1 quoted in Clare Wright The Forgotten Rebels of Eureka p87

Read more about what led Catherine Sarah Young to create this project and how she went about making the soaps. Turning Sewage into Soaps: The Sewer Soaperie by The Apocalypse Project. Follow her on twitter or follow #sewersoaperie on instagram

The Soap Factory by MUSK Architecture

Culture Victoria Melbourne and Smellbourne – an impressive collection of resources