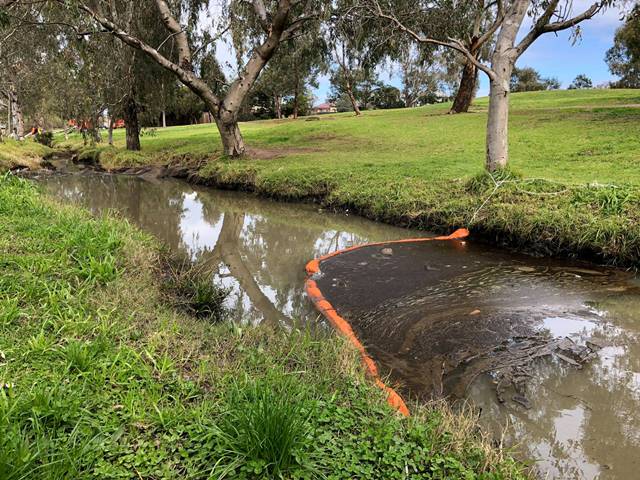 Just one week after the fire in Montague, a thick black smoke plume visible across the Bay signalled a fire in the west.  Shortly after 5 am on Thursday 30 August, MFB fire crews arrived at an out of control blaze at a warehouse on Somerville Road in West Footscray.

The effects of the damaging fire are still being felt and its ongoing implications are yet to be understood – especially on Stony Creek and the Yarra estuary.

The EPA reports that 55 million litres of fire water have been suctioned from the creek for treatment. However, because of the sheer volume of fire water, some has run off into the Creek and then into the Yarra. Three hundred dead fish have been removed from the Creek so far with an estimated further 2,000 to be removed. People have been advised to avoid the Creek and not to fish near it.

The fire has been deemed suspicious, a blitz on all industrial premises has been announced and a review into the fire response promised.

Stony Creek has a tough history. The northern edge of the Stony Creek backwash started off as a basalt quarry before becoming a meat preserving works. When the meatworks was destroyed by fire in 1871 it was followed by a glue factory. It has been used for oil storage for nearly a century. 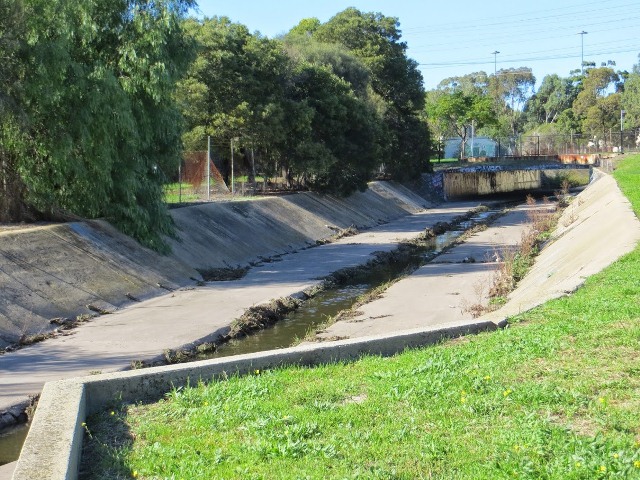 But over the last forty years Friends of Stony Creek have worked on restoration projects along the Creek including at Cruikshank Park. The history on their website concludes optimistically  ‘The future of the Creek is bright with promise’.

Now that patient work has to begin again.

In a community short on open space Stony Creek plays a vital role. No matter how compromised, how altered, how diverted, waterways draw people to them.  Stephanie, an early childhood educator, wrote on instagram ‘the creek has become as much our place as inside of our fences.’

She describes how intricately her work in early childhood education draws on the Creek:

“Creek is woven through every part of our programs, days and rituals. Creek is our playful friend offering challenge, risk, exploration and investigation. We make patterns with pebbles and boots, we fish and clean with sticks and tongs. We stare in wonderment as it roars on rainy days and sparkles with yabbies beneath the surface in late summer.”

The fire occurred in a week thick with policy achievements and announcements relevant to the fire and post- fire management.

On 22nd August, the Environment Protection Amendment Act passed into law. The updated Act is the culmination of several years of work to update an Act which, while ground breaking when first passed in 1971, was failing to meet community expectations in 2018. The updated Act responds to the widely held view that the EPA has been reactive, rather than proactive. The Act introduces a general environmental duty that is criminally enforceable. It is highly focused on prevention. The Act will become operational in 2020.

The EPA appointed a new CEO, Dr Cathy Wilkinson, on the 28th August.

On the 27th August, just days before that looming black cloud billowed behind back fences, an air quality summit was held in Melbourne, in preparation for a clean air strategy to be developed in 2019.

On the 28th of August, Water Minister Lisa Neville and Planning Minister Richard Wynne joined with local MPs to start a process of working with local communities and traditional owners towards a Waterways of the West Action Plan. The plan will ‘bring to life community expectations and local values’.

Stony Creek is off limits for now. It’s no to the pleading dog, no to the puzzled children.

The spirit of the Creek community is already rekindling towards the restoration of this damaged waterway.

Stephanie hopes the fire will “ignite a call to action in all of us and help find avenues for us all to feel hopefulness and purpose”.