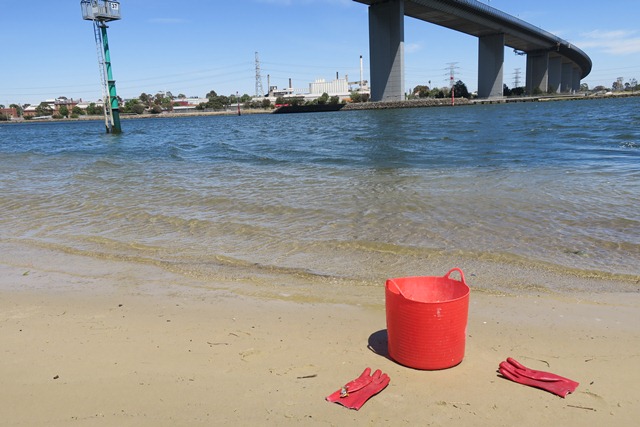 Less faithful to this river beach under the Westgate Bridge than in previous years but constant enough to get to know the rhythms of litter. After rain, the flood of littered plastic borne downstream by the River. In dry weather, the food and fishing packaging left behind by people who also like to spend time here.

What can be relied upon on this small beach in all weeks and in all weathers is polystyrene. Always and every time there is more polystyrene. In between the rocks, in chunks, fresh and old, along the tide line, there is always polystyrene. Polystyrene is always my priority for picking up – preceding attention to other items. Next come plastic bottles – 67 in one day in October after strong winds.

And to give some purpose and pattern to the exercise – collecting!

This year I focused on collecting one single-use item – Masterfoods Tomato Sauce Portion Control 14g ($23 for 100) – all gathered from this 30m of beach over the course of the year. 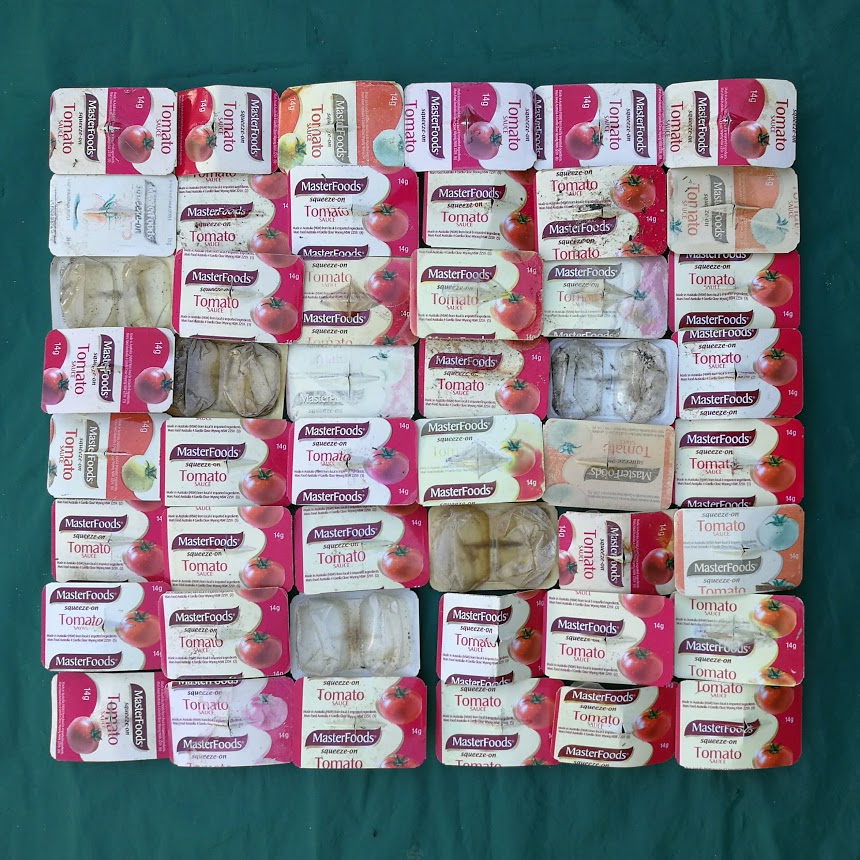 Beach Patrol – a model for our times? 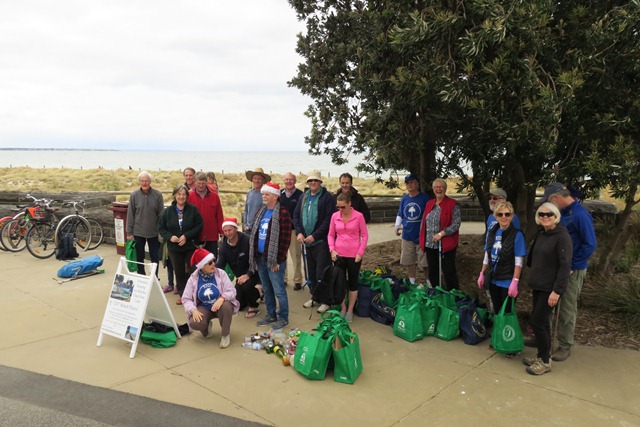 This year Beach Patrol has become more systematic in not only collecting litter, but in collecting data, to add its weight to the growing testimony of the extent of plastic pollution in the marine environment. The most collected items this year were plastic fragments <5cm and plastic fragments >5cm.

There are now 21 Beach Patrol groups around Port Phillip Bay (18 in 2015). They are complemented by two Love our Street groups – the first group set up in Elwood – which meet monthly to pick up litter in neighbourhood shopping centres before it reaches the Bay.

All that is asked of people is one hour of their time once a month – no joining fee, no membership – and the sociability of a coffee afterwards. Beach Patrol has worked hard to provide all the support needed to make it easy for new groups to form.

Ross and Ramona Headifen, the nicest drivers possible of 3207 Beach Patrol, pursued their dedicated year long project to monitor and measure litter every day on a 30m section of a Port Melbourne beach.

CSIRO predicts that plastics ingestion in seabirds may reach 95 per cent of all species by 2050, taking into account the steady increase of plastics production.1

The focus of effort needs to change from a reliance on recycling and waste disposal to avoiding single use plastic.

Avoid. Refuse. Re-use  … and only then recycle.

Refuse the straw. Refuse the plastic bag. Refuse the fishy soya sauce bottle. Recycling is a bit like the dietary guidelines that have been superseded but continue to drive behaviour. They have done their job too well in making us think recycling is enough.

We’ve got to keep looking up the catchment of policy to the source of the problem, and while the long processes of change take their course, to look up the Bay’s catchment for everyone to become a custodian of their street because every street links to a waterway.

This year container deposit schemes have been approved in Queensland, New South Wales and Western Australia and plastic bags are set to be banned in Queensland.

2 Commonwealth of Australia Toxic Tide: the threat of marine plastic

The 2015 collection focused on cigarette lighters and earplugs

The 2014 collection focused on the plastic fish soya sauce bottles