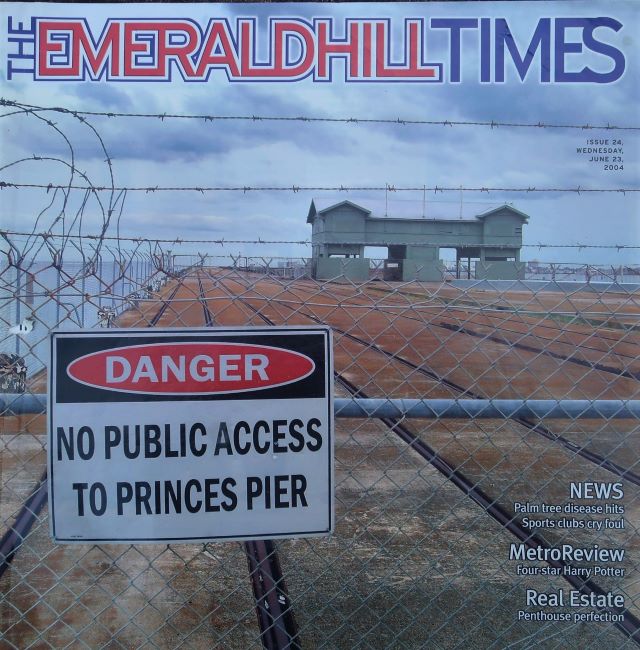 The Caulfield and Port Phillip Leader will move online from June 29 and readers will have to pay for the privilege of scouring the Leader website for some scrap of Port related news. Plunging advertising revenues led Newscorp to cease publication of 36 local newspapers around the country and move a further 76 online.

There will be no mourning or regret here as the Port Phillip Leader has not served Port Melbourne well for a long time, maybe never, with Port news hard to find among the advertising in its jumbled layout.

Perhaps the recent heyday for Port Melbourne local newspapers was from the late 1980s to the early 2000s when they reported on Port Melbourne’s intense transition to high end residential development and the amalgamation of local councils into Port Phillip. Then the focus moved from real life to lifestyle. From 1985 onwards, the Emerald Hill Sandridge and St Kilda Times brought weekly reports of some new revelation, some fresh controversy about the troubled Bayside site. The paper was an indispensable vehicle for citizens and community groups protesting the Sandridge City Development Corporation development proposal. The EHS&SK Times even had an office at 79 Bay St where Moshi Moshi is now.

The Emerald Hill Weekly followed, with progressively less news and more advertising but distinguished by its spectacular front covers, the work of photographer Peter Weaving. Weaving spent 25 years covering Port Melbourne and his photographs showed a real affinity with the place. He writes

“Port was always one of my favourite areas to photograph in. I loved the characters of the area and also the amount of rapid change that was going on during the period. I had come from working in regional towns and in the ’80s Port Melbourne always had that feel even though I was so close to the city.”1

Talented young journalists like Jewel Topsfield, now the Melbourne editor of the Age, broke the stories of the new City of Port Phillip. It’s hard to believe now that people were actually paid – admittedly a meagre amount – for walking the streets delivering the local paper (along with heaps of other print advertising) and that readers were unhappy when the newspaper bundle was abandoned by the distributor and they missed out on a copy.

If one of the roles of local newspapers is to report on local government, where does that leave local democracy in Port Phillip without a valid local newspaper? Some argue that there is a direct relationship between holding Councils accountable and the local paper.

Now Councils have their own media departments and are proactive in putting out their own messages rather than hope that their intentions are picked up and fairly represented in the paper – what paper? Only controversies of a metropolitan order make their way into the metropolitan papers, (themselves diminished). There’s certainly no one dedicated to sitting through Council meetings, although that can also be done online now, looking for stories. The Council’s own publication, Divercity, will also move online in a cost cutting measure proposed in the Council’s draft budget.

The Docklands Authority initiated a local paper to build a sense of identify around the new Docklands community. Shane Scanlan got the gig. Docklands News emerged from that paper. Scanlan found that the shared interests of those living in high rise communities was a good foundation for a newspaper.

It was always good to see Scanlan in the foyer of the Melbourne Town Hall before a council meeting chatting with people who’d come to address an item on the council agenda. The ink ran in his veins, or rather the pencil in the notebook, that he always had at hand. He would be so animated, so energised, by asking questions of the Council particularly in the Robert Doyle days. The news article would soon follow in Docklands News. Southbank News and CBD News were added to the stable. When Scanlan retired, Southbank News editor Sean Car took over all three papers.

Car is commendably fair and thorough in his coverage of local issues, and gives generous space and a voice to local community organisations such as the Montague Community Alliance and the Southbank Residents Association while covering the important bases of fashion, dogs and planning updates.

Local historians of the future will find their sources broader on the one hand and impoverished on the other. Even though Trove is a fantastic resource for accessing historical newspapers, there is a hole in the immediate pre-internet period where no local newspapers are online. A joy of reading old local papers is the way the elements are assembled on the page that gives so much contextual information. It’s often not the article you intentionally kept but what is on the reverse side that suddenly becomes fascinating. The advertising gives a picture of the shops of the day and the prices.

Part of the intention of Port Places is to record moments from the times we are living through and to record speeches at significant events such as Anzac Day and the Whittaker Memorial that would otherwise be blown to the four winds were they not anchored down in text.

1 Sadly it appears that the negatives of Weaving’s photographs have not survived changes at the newspaper.

Pick up you copy of Southbank News at the servo at City Rd and York St, or find any of the three online.

The papers we once had