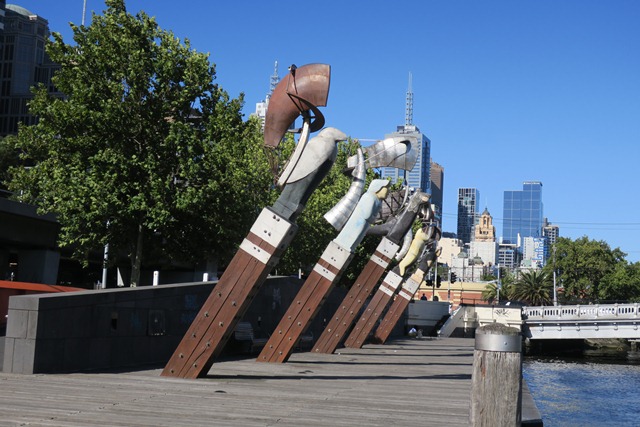 The place for a pool?

This week I have been spending time beside the Yarra at Enterprize Wharf – perhaps one of the most significant places in Melbourne.

Here at Queens Bridge were the basalt Falls that separated the freshwater from the saltwater  – an ancient River crossing.

It was the availability of that fresh water that determined the settlement of Melbourne.

This was the place where Captain John Lancey and others aboard the Enterprize made land fall on Sunday 30th August 1835.

This was where the first ships clustered and where the settlement of Melbourne began. Below the Falls was a deeper pool where ships could turn to make their return downriver.

Audaciously, the Turning Basin is the site proposed for a swimming pool on the Yarra by Yarra Pools. Perhaps it’s the ‘fascination of what’s difficult’1 that they have chosen such a sensitive, layered and complex site for their bold idea.

Twenty years ago, the City of Melbourne recreated the Turning Basin. It had been filled in after the construction of the Spencer St Bridge cut off access to it. The Council  commissioned sculptors Geoffrey Bartlett and Bruce Armstrong to create the work Constellation. Perhaps it was to make a civic gesture to counter the controversial building of the Crown Casino which opened in 1997. It was part of work, still ongoing, to improve the amenity of the north bank of the River.

This intriguing work with its proud and mysterious figureheads is undermined by being isolated from other sites which give it context, meaning and significance.

The handsome Customs House (now the Immigration Museum) is two frustrating pedestrian crossings away. Designed by architect Peter Kerr and begun in 1858, it reflects the prosperity of the gold rush era. Behind it is the distinguished Port Authority Building designed by Sydney Smith, Ogg & Serpell completed in 1929. The nine level building, since altered, reached the 132 foot Melbourne City Council height limit which was not to be breached again until 1955 by the ICI building in East Melbourne.

Shipping, customs, port – a line of functional relationships that are harder to read now – although they can still just be discerned from the south bank of the River. 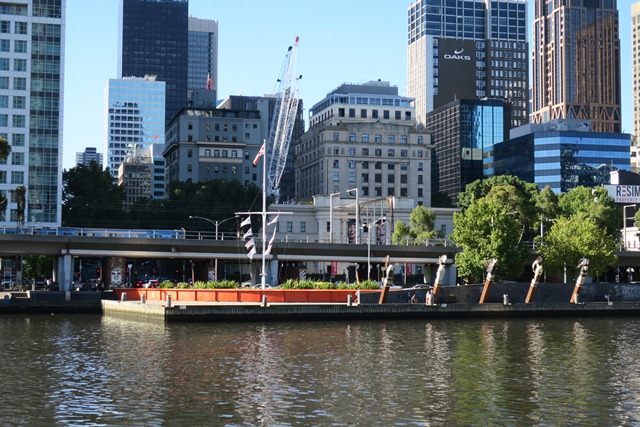 all lined up – Enterprize Wharf, the Immigration Museum and former Port Authority Building

The immediate context on both sides of the River is set to change drastically.

The crane in the photo above marks the spot where the Collins Arch will start appearing this year. This development, also known as 447 Collins St, was finally approved by Minister Wynne in 2016 with conditions to minimise overshadowing of the north bank of the River. The second image on the front page of the Collins Arch website shows how the development will appear from the south bank of the River.

Twenty years after the opening of Crown Casino on Southbank, One Queensbridge (Crown Residences) was approved by Minister Wynne who facilitated the development through a site specific planning amendment. One Queensbridge will be 323m (90 storeys), 26m taller than the Eureka Tower.

The Enterprize Wharf has a spacious timber deck. A woman practised yoga. I took the steps right down to the River. After last week’s rain an eddy of litter made the idea of swimming unappealing but my imagination is whetted.

Join a session at the M Pavilion this Saturday 20 January from 11-1 Towards a swimmable, liveable Yarra to hear from River champions with wonderful ideas for our health and the health of the Yarra

Michael Cathcart draws on various historical sources to discuss the area below the Falls in The Water Dreamers.

I highly recommend Jeff Sparrow’s article Melbourne from the Falls Overland Journal 9 July 2012 in which he draws on various paintings to show changes over time and to illustrate the significance of the area.

The Turning Basin and the relationship between wharf, Customs House and Port Authority Building are starkly illustrated in this photograph by Charles Daniel Pratt.

Meyer Eidelson The Melbourne Dreaming: A Guide to the Aboriginal Places of Melbourne (1997)

Yarra Pools: towards a swimmable Yarra