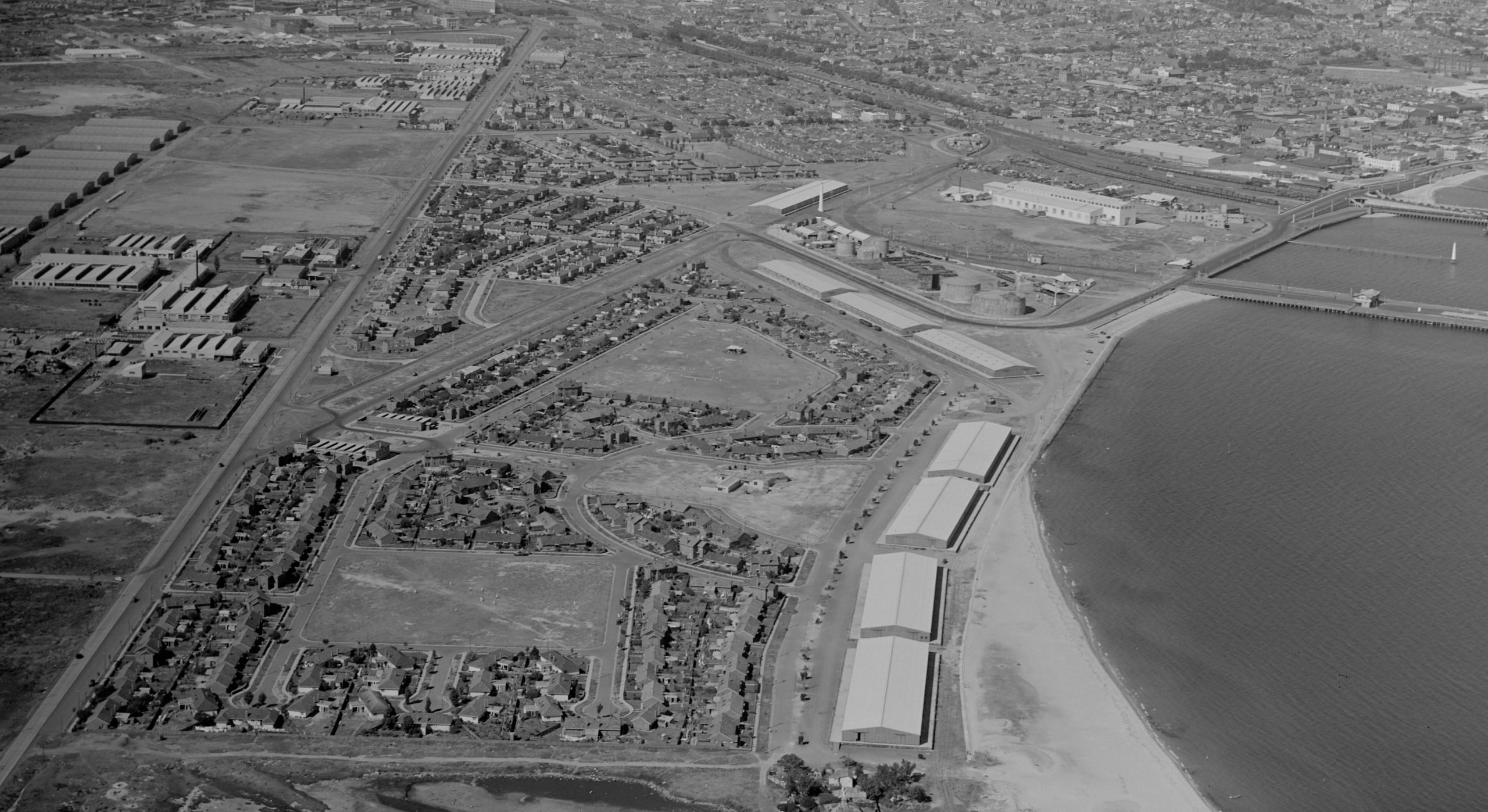 The plaque on the wall

In this hyper-local 5 km radius world, I’ve noticed things for the first time that have been in plain sight all along, like this plaque on the wall of the housing estate between Beacon and Barak Roads, Port Melbourne.

I am not sure whether people still refer to the estate by this name. The three storey walk ups, officially opened in 1982, were a different approach to the delivery of public housing from the high rise tower blocks like Park Towers against which public sentiment had turned.

The estate was built on a site formerly occupied by what were known locally as ‘the Yankee sheds’, highlighted in this aerial photograph. Note the sheds proximity to Port Melbourne’s piers and the fuel storage tanks opposite the sheds.

The sheds were a place to hang out and sun bake for young people in the fifties. By the seventies they had become derelict, an eyesore, and a source of endless complaint to the Port Melbourne Council. Local member of state parliament, Archie Todd, saw the site as a great opportunity to create more housing for Port Melbourne people, a cause to which he was dedicated. The Melbourne Harbour Trust stood in the way, refusing to relinquish the land which it had reserved for a railway line from Webb Dock. Following Todd’s persistent advocacy, the land was finally made available for housing.

So how did those sheds come to be located there?

Just a few days after the Japanese attacked Pearl Harbor, long range Japanese torpedoes sank the battle cruiser HMS Repulse off Singapore. The Repulse, together with the Hood, had visited Port as part of the Empire Cruise in 1925. .

From December 1941, Port people lived with the fear of imminent invasion. Prime Minister Curtin issued this grave warning on 27 December 1941:

“Australians must be perpetually on guard; on guard against the possibility, at any hour without warning, of raid or invasion”.

By 15 February, Singapore had fallen to the Japanese. A Japanese reconnaissance flight flew over the Bay on 26 February. Although not reported in the papers at the time, the plane which was flying low, was seen by enough people for the news to travel fast. There were even reports in Japanese papers that Port Melbourne had been bombed. Curtin dispelled them.

It was in these circumstances that American troops built those sheds in record quick time to provision and supply the Pacific campaign.

These notes are from research for Port – The Second World War, a virtual walk for the City of Port Phillip’s Heritage Programme on Sunday 6 September 2 – 3 pm. Bookings here.

Thanks to Reg Macey for his persistence in uncovering this untold history of Port Melbourne.