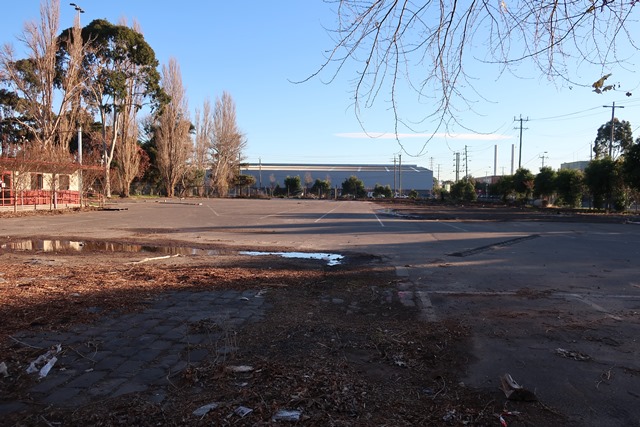 From the elevation of the City Road tram stop there’s a great view over South Melbourne Primary School and Kirrip Park. It was recess. The school forecourt was alive with children and the sound of their playing trumped the freeway noise. Across narrowed Meaden Street in Kirrip Park children raced up and down the mounds and poked around in the ‘creek’ flower beds.

At the beginning and end of the school day parents and children linger outside the school. New connections and associations are made.

This gives meaning to what was hoped for in the first catalyst project in Fishermans Bend.

At the end of June, Citywide vacated the Council depot site on the corner of Graham and Plummer Sts to make way for the new secondary school to be built in Fishermans Bend. The designs for the new school were revealed in July. This is another catalyst project. The school is planned to open for the school year in 2022.

This has been the season of demolition as sites in Fishermans Bend with planning permits are leveled in preparation for development.

The corrugated iron clad factory buildings of the former Rootes factory, where Hillman, Humber, Singer, Sunbeam, Talbot, Karrier, Commer vehicles were manufactured, were demolished in late July. The administration building will be retained.

The operators of the excavators work steadily, methodically – crushing, squashing, assembling and removing all evidence of the industry that once took place here – leaving neatly leveled sites ready to accommodate the next layer of history. Delta Group and B.R. Demolition are hard at work in Fishermans Bend.

Delta Group reports that they divert more than 4m tonnes of construction waste from landfill every year with over 90% of material recycled and reused as building material.

Other sites that have been cleared include the former Oxford University Press site (Normanby x Boundary), the former Carlins site (Buckhurst & Ferrars St, and the site on the corner of Ferrars and Thistlethwaite St.

Tools for the job

Sydney Tools has taken up a focal position in Fishermans Bend on high profile Normanby Rd while Kennards eqipment hire has moved to a prominent 3200 sqm site on Williamstown Rd close to the freeway network.

The pieces of the sliding puzzle move from one part of Fishermans Bend to another.

Industri, a cafe of Harry Stefanidakis that has been a gathering place in cafe lean Montague for many years, will re-open at the nearby Wayside Inn as 181 Ferrars St is prepared for construction – acting on a permit issued in 2015.

The largest container ships yet to visit the Port of Melbourne, the MSC Antonella and Maersk Skarstind, have squeezed under the Westgate Bridge and eased their way up the River to Swanson Dock. These ships are around 300 m long with a beam of 48 m and a capacity for around 9000 containers.

The waste crisis escalated in Q3 with the City of Port Phillip’s recycling contractor SKM being wound up in August. The few community compost bins are full as residents look for alternative solutions for food waste. Neighbouring councils Bayside and Glen Eira have introduced a food waste bin. Reducing waste generation has become the most urgent action to take.

It has been a vigorous tree planting season in Port Phillip. Future climate predictions are front of mind in choosing the trees. Tree species selections for Dubbo, Parkes and Narrandera in NSW (towns with climates analogous to those predicted for Melbourne) as well as tree species with moderate to high drought tolerance were used to inform the planting of 31 Corymbia eximia in Liardet St and 35 Quercus agrifolia (California live oak) in Pickles St. The oak is native to California and Mexico.

Although it has felt so grey, colour is erupting in Port places. Most delightful of all is the flowering of the hardenbergia in the new ‘creek’ bed that flows through Kirrip Park and the visitation of a bee – delightful because this area had been bereft of vegetation until recently.

Since this is a football reference, you might like to know that Port Melbourne is 7th on the VFL ladder. Richmond leads. The Port Melbourne Women’s team, which entered the competition in 2018, has had three straight wins – toppling the ladder leaders.

For more detail on any of the sites mentioned above, visit Port Houses.