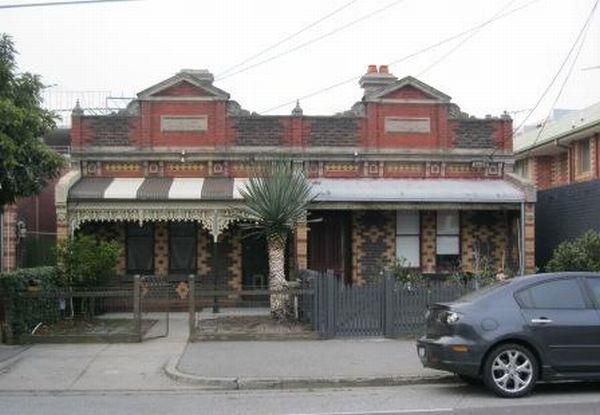 ‘Until March 1902, this site was occupied by a pair of five roomed wooden houses. By March 1903, the owner, Patrick Darcy had erected a pair of five room brick houses. The pair … are of great importance as intact single storey polychrome brick terraced houses. Both houses have two double hung sash windows with a front door towards the middle of the building. The virtuoso use of brick around the windows and doors would be equalled by few houses of this size in Melbourne.

Between the verandah and the parapet is a colourful row of glazed tiles interspersed with pairs of brackets and garlands. The central portion of the parapet is constructed in red brick contrasting with the dark brown used in the rest of the house. Elaborate cement render consoles support a central pediment on each house, and under this is the name, also in unpainted cement render. The chimneys are constructed in red and yellow bricks with a refined cement render capping.’