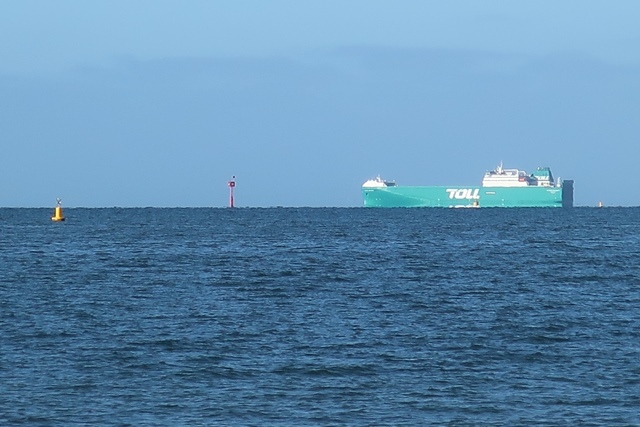 Two brand new and almost identical ships can now be seen moving across the horizon from the shore. Toll’s Tasmanian Achiever 11 and the Victorian Reliance 11 entered the Bass Strait service on 1 March. They are the first new Australian flagged vessels to have been commissioned for a very long time.

The ships, built at China’s Nanjing Jingling shipyard, cost $86m each. They are part of Toll’s $311m investment in the Bass Strait trade which includes upgrades of the wharves at Burnie and Webb Dock. The ships have 40% more capacity than their predecessors, can be loaded and unloaded at the same time, and have cut one hour from the shipping time between Burnie and Melbourne. The ships should provide sufficient capacity for another 15 to 20 years.

The new ships were officially named in two separate, but far from identical, ceremonies held one week apart. The significance of the arrival of these two vessels was reflected in the presence of the Prime Minister, Scott Morrison, at Burnie and the Leader of the Opposition, Bill Shorten, at Webb Dock. The launch events were heavily freighted with election messages.

At the launch of the Tasmanian Achiever 11, Scott Morrison delivered a generic speech heavy with jobsngrowth. But it was boats of a different kind that got him going. In response to a question he said

“… this is one boat that we have had a keen hand in supporting it starting because it’s driving jobs and growth here down in Tasmania and right across the country. But the boats I can assure Australians I’m going to stop are the ones who are going to carry those who would seek to illegally enter Australia.”

A week later, on February 24th, Bill Shorten was at Webb Dock for the official naming of the Victorian Reliance 11 along with Anthony Albanese the Shadow Minister for Infrastructure, Transport, Cities and Regional Development.

Shorten was fired up. We learn that his father was a seafarer from Newcastle upon Tyne, once a great centre of ship building, who also spent twenty years working in ship repair at Duke & Orr’s – where the Polly Woodside is moored at South Wharf. Shorten announced Labor’s intention, should it win government, to strengthen Australian shipping and to support Australian seafarers. He highlighted Australia’s strategic vulnerability, as an island continent relying heavily on imports, in relying on a mere 14 Australian flagged vessels. Even Switzerland, a landlocked country, has more vessels than we do, he said.

Webb Dock was created to serve the Tasmanian trade. From the late 1950s, the Australian National Line invested heavily in creating a port at the entrance of the Yarra, at first called the River Entrance Dock. The Princess of Tasmania, built in Newcastle, New South Wales, was launched there on 15 December 1958. It was the first ro ro (roll on roll off) vessel and at that time, the largest ship to have been built in Australia. It is widely acknowledged that the experience of building that ship and preparing the specialised berths at Webb Dock laid a strong foundation for the Port of Melbourne’s readiness to receive the first container ship at a newly created Swanson Dock in 1969.

But it was a paragraph at the end of an article that caught my eye:

‘The new vessels will plug into the local power grid while at berth, rather than running their own engines for power. The vessels have also been built to comply with the IMO 2020 sulfur emissions standards and feature on board scrubbers for emissions filtering.’

That is welcome news to Port, and especially Beacon Cove, residents because they demonstrate that very close by at Webb Dock there is an alternative to the heavy sulphur emitting marine fuel relied upon by vessels calling at Station Pier.

The sight, and smell, of this low grade marine fuel will hopefully be a thing of the past when the new Spirit of Tasmania vessels are delivered in 2021 as they too will be compliant with the new emissions standard.