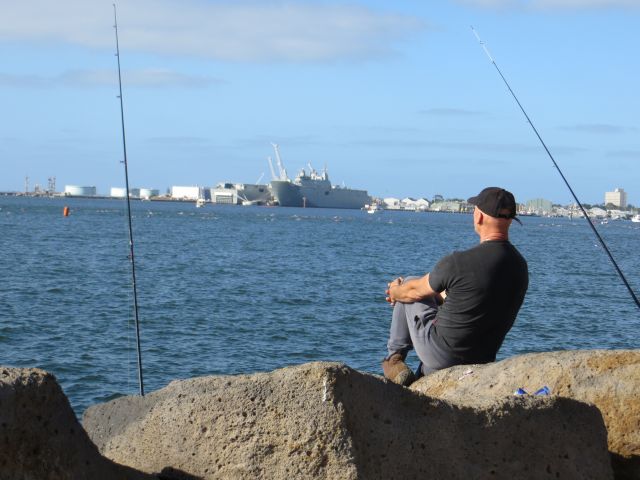 Early on Sunday, swimmers raced from Sandridge Beach to Williamstown for the annual Big Bay Swim.  This photograph of the swim was taken from Webb Point, the proposed site of an observation tower promised as part of the community benefit of the Port expansion project.  From the point, Williamstown looks a casual swimming distance away. It brings you as close as is now possible in this modified landscape to the mouth of the Yarra.

The Port of Melbourne closed the shipping lanes for an hour while the race was on. Swimmers were protected by an arc of boats on the seaward side, and monitored minutely by Life Saving Victoria volunteers on powered and unpowered craft on the shore side. As the participants moved into the shadow of the great warships at Williamstown, the contrast between the size of the ships and the vulnerability of even those strong swimmers was stark.

Such whole hearted protection for these swimmers – couldn’t help but contrast with asylum seekers on open water.

The path was busy with fishing on Sunday. 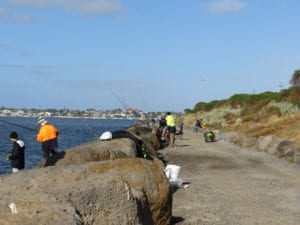 The path around the perimeter of Webb Dock East was made in the late ‘90s when Webb Dock was expanded into the Bay – necessitated by the construction of Docklands and the Bolte Bridge.  The path was a recommendation of the extensive Environmental Effects Study that was conducted at that time.

The path is still a bit of a local secret – popular with fishers, dogwalkers and joggers. It offers unusually sweeping views back to Docklands and the City – which are exceptionally good at sunset. Mounded to create a visual barrier to Port operations, it is landscaped with locally indigenous coastal and saltmarsh plants.

This current phase of Port expansion undertakes to extend and upgrade this walking and cycling path from the tip of Webb Dock through Perce White Reserve along Todd Road to connect with Westgate Park and beyond.