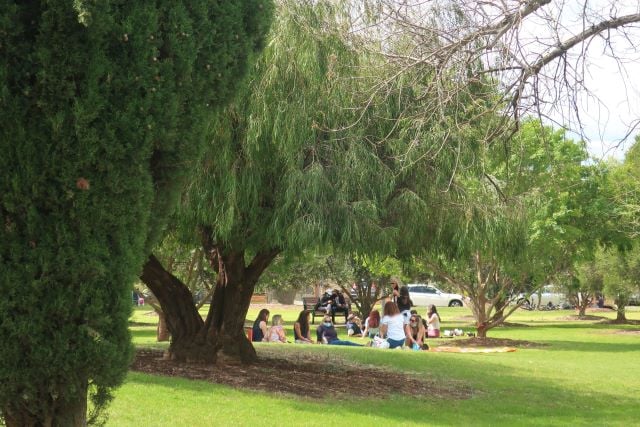 Melbourne is opening up after several consecutive days of zero new cases of COVID-19 and zero new deaths. The ‘ring of steel’ has been dissolved and many people are getting out of town. The ‘gym’ under the overpass where we met boxer Cameron Ravendra Eyes has reverted to an empty place to walk through on the way to the tram as personal trainers and their clients return to the gym.

In the COVIDSafe new world, outdoors is recommended for gathering. The City of Port Phillip is actively supporting hospitality businesses to take dining to the street. With speed and resolve, the Council is processing and facilitating applications for outdoor dining.

Some sites, such as the North Port Hotel, are favoured by their location – opposite the Railway Reserves. The Railway Club Hotel has the advantage of two street frontages and has deployed high-end dining pods formerly used at race meetings which were held this year without a public.

Formerly prized car parking spaces adjacent to Port Phillip’s main shopping strips are being given over to outdoor dining without murmur or complaint. Before COVID, it was a brave Council that attempted to remove one of these precious spaces so strongly associated with the health of local shopping strips.

It is a the realisation of a movement that began in 2005 when John Bela and colleagues occupied a car parking space in San Francisco and created a mini park with some lawn, a potted tree and a chair, and waited to see what would happen next. It was social.

That urban intervention led to the global movement, Park(ing) Day, when on the third Friday of September each year, people would create a park out of a parking space. Architects, landscape architects and citizens created playful, fun mini parks to show how public space can be used for people, rather than for just parking cars.

Since then, that idea of reconfiguring streets with a focus on people, rather than cars, has gathered pace but it has taken COVID-19 to accelerate its uptake for the public health benefits it offers.

Outside the Prince Alfred Hotel in Port Melbourne, hugely popular for take away during lockdown, several on street car parking places are now occupied by chairs, tables and planter boxes. In busy locations like this, extra measures of road saftey barriers need to be put in place to ensure those diners are not at risk from cars. Yet even with all that space taken up by outdoor dining and road safety barriers, there is still enough room for two cars to pass – slowly. And slowly is just right, because slowly is safer.

Each car parking space taken up for outdoor dining is book ended by a planter box planted with locally indigenous plants from Bili Nursery, adding a biodiversity touch to the project.

The parklets are permitted on a three month trial basis with a review after that.

More amibtious proposals, such as the one favoured by the Port Melbourne Business Association for the closure of the area outside Coles on Liardet St will properly require community engagement which was not possible during the election period.

Will we grow to like the new arrangements and want them to stay in place? We’ll just have to see what happens.

The brief flowering of picnics in COVID safe circles when that was all that was allowed has perhaps been superseded by outdoor dining.

For many decades in the early 20th century, Port Melbourne had an annual tradition of a children and citizens picnic. It was a highlight of the year. Organised by a committee that included the Mayor and other leading citizens, the day of fun and games took months of preparation including getting support from local businesses. Several thousand picnickers would travel by train to Hurstbridge or Diamond Creek for the day out. The notices recur ritually until 1937 when this notice appears:

‘Owing to the non-abatement of cases of infantile paralysis in other suburbs, and to meet the wishes of many parents of school children in the district, the committee of the Port Melbourne Citizens’ and Children’s Picnic, which was to have taken place next week, have indefinitely postponed the outing.’