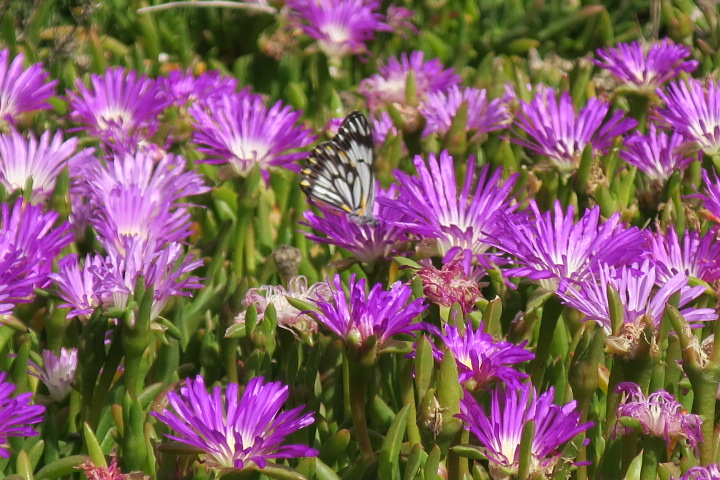 It’s that time of year when Westgate Park is ’empurpled’ – to borrow that wonderful word from Georgiana McCrae, 19th century artist and diarist. Pigface and rounded noon flower carpet parts of the Park. 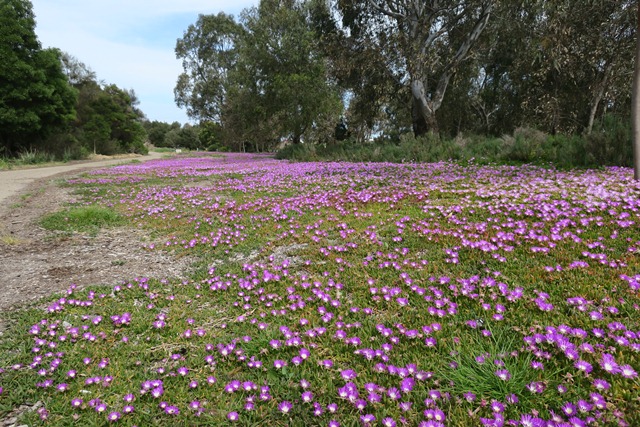 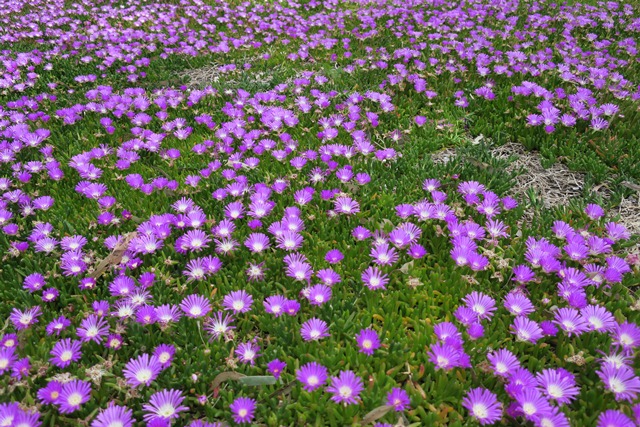 ‘To the west of [Lonsdale Street] and just a little to north, stretching almost from beyond the base of the Flag-staff Hill lay a beautiful blue lake … intensely blue, nearly oval and full of the clearest saltwater; but this, by no means deep.

Fringed gaily round by … ‘pigsface’ in full bloom it seemed in the broad sunshine as though girdled about with a belt of magenta fire. The ground gradually sloping down towards the lake was also empurpled but patchily, in the same manner, though perhaps not quite so brilliantly.1

One of Coode Island’s few residents, Bill Lemarquand, who was born on the island in 1901 and lived there until the 1940s, recalls

‘The most beautiful thing I have ever seen was the pigface growing on the island in spring. It was a swamp in the middle before they drained it. I will never forget that pigface.’ 2

Inspired and motivated by reading The Little Things that run the City, a research report on the role that  insects play in the city, I spent some time sitting in a bed of rounded noon flower in Westgate Park watching the butterflies going from flower to rounded noon flower. The caper whites, Belenois java teutonia, were abundant.

Researchers Georgia Garrard and Dr Sarah Bekessy from RMIT have been re-imagining the suburb – and Fishermans Bend – and exploring whether the design of cities can ‘re-enchant urban residents with nature’.

That brief description from Georgiana McCrae and these butterfly glimpses suggest that such enchantment by urban nature is readily accessible if we take the time to look more closely.

This pigface will create a lot of  pigface berries in the coming months. They are delicious for animals such as blue tongue lizards and humans. Convict William Buckley related he ate a lot of pigface berries on his escape journey from Sorrento to Port Philip in 1803. I eat them when I can get them – obviously Westgate is the place to harvest.

1 G G McCrae, ‘Some Recollections of Melbourne in the “Forties”, Victorian Historical Magazine, No 7, November 1912

3  The Little Things that Run the City – How do Melbourne’s green spaces support insect biodiversity and promote ecosystem health?